Neat features aside, the Tiny doesn’t have much to shout about 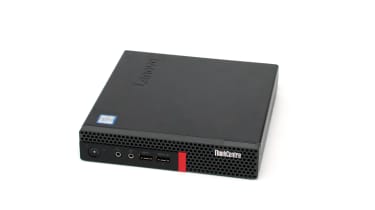 The days of needing the shackle your employees to bulky, monolithic desktop tower PCs are - thankfully - long gone. Nowadays, work machines don't need to take up any more space than the average paperback, allowing businesses to save space without sacrificing on power or functionality.

This has been ably demonstrated by the fantastic Raspberry Pi 4, but while that machine is a miniature marvel, it's not the easiest device for IT departments to roll out to staff. Enter the Lenovo ThinkCentre M910x Tiny: a mini-PC that combines the space-saving qualities of the Pi with a fully-fledged Core i5 processor, Windows 10 Pro and a brace of enterprise-ready ports.

Part of the ThinkCentre Tiny range of ultra small form factor systems, the M910x is impressively petite, measuring just 36mm thick and 18cm across, with a total volume of 1,264cm3. That's on par with Dell's pint-sized Optiplex 7060 Micro - although it still dwarfs the Raspberry Pi 4.

The most impressive thing isn't the machine itself, but the ecosystem: Lenovo has gone to some trouble to turn its collection of mini PCs into something that can be as many things to as many people as possible.

As well as more optional mounting systems and accessories than virtually any other system on the market-- including an under-desk mount and a dust shield -- there's a pair of displays, one touch-sensitive and the other plain, into which a ThinkCentre Tiny slots to provide something functionally equivalent to an all-in-one system but with a future upgrade path. This isn't to be confused with a VESA mount for attaching it to the rear of any VESA-compatible monitor, a bracket for which is included in the box.

Ecosystem aside, the ThinkCentre Tiny is relatively unremarkable save for two unique aspects. The first is a 2.5in SATA drive bay that can be replaced with an optional discrete AMD Radeon RX460 4GB graphics board. The second is an "Option Board" area at the rear, fitted for this review with a VGA output and RS232 port but also available with HDMI or USB-C 3.1 with DisplayPort connectivity to augment the dual DisplayPort outputs. 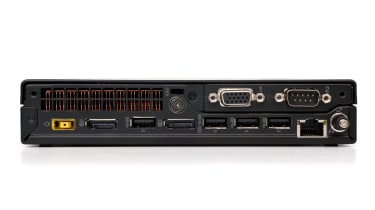 Performance of the non-user-replaceable quad-core Intel Core i5-7500 is perfectly acceptable for Lenovo's target as a desktop replacement for the office. In fact, with a nice, round overall score of 100 in our benchmark tests, it's capable of handling pretty much any mainstream duties you care to throw at it, including video editing if you plump for the discrete graphics option.

The Tiny is one of the rare mini-PCs to come with a bundled keyboard and mouse -- and while these are nothing to write home about, they're serviceable and will likely be welcomed by the target market of buyers looking to outfit a full office or six with compact computers. Less acceptable is Lenovo's bundling of its own software, which is injected into the Windows setup process: click carefully, or you'll find yourself signing up to an unnecessary Lenovo account alongside your Microsoft one.

Lenovo deserves plaudits for its warranty, though: three years on-site should mean a trouble-free lifespan for any of its ThinkCentre family.

The M910x Tiny has some attractive points in its favour. It's conveniently-sized for one thing, and guaranteed to fit into even the most tightly-packed workspaces. It's also highly versatile, with a range of different mounting options, accessories and configurations available to suit almost every conceivable business need.

However, the biggest issue is the price. At 659 before tax, it's over 100 more expensive than its biggest rival, the Dell Optiplex 7060 Micro, which also has it beat on performance. If you've got an existing Lenovo estate, smart features like its integrations with the company's other products and accessories may justify the extra cost, but for everyone else, better value can be found elsewhere.