Epson’s XP-7100 delivers extra features and performance, but struggles to justify the premium 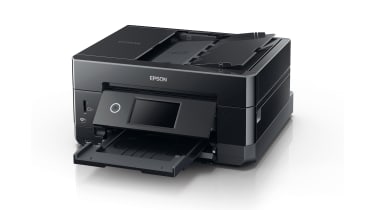 The Expression Premium XP-7100 sits towards the top of Epson's range of home inkjet MFPs. It combines a 1,200 x 4,800dpi scanner with a five-ink printer, fed by dedicated A4 and photo paper trays in the main body. The specification is high throughout, with support for both wired and wireless networks, an SD card slot, and control via a large 10.9cm colour touchscreen. Although there's no fax modem, the 30-sheet, duplexing ADF lets you make unattended multipage copies or scans.

The XP-7100 stands surprisingly upright in the flesh, but it's almost stylish. Turn it on, start printing and its control panel and output tray both motor automatically into place. It's a neat party trick, but we wish Epson had concentrated more on the menu, which is poorly translated in places. Additionally, the touchscreen isn't super-responsive, and the only way we found to turn off its key beeps was to switch on quiet mode, which slows down printing.

These grumbles aside, the XP-7100 is easy to live with. The two paper trays mean there's less shuffling around when you want to print photos, while a single-page rear feed adds to the flexibility. The ADF makes it a credible home office device, too, even if the outputted page order is reversed during simplex copies.

At 14.7ppm this is a reasonably fast text printer, but it excelled itself with 6ppm in our colour graphics test; it even duplexed at 3.4ppm. Borderless 10 x 15in photos emerged almost on the minute, too. Scans were generally quick, with a 300dpi A4 image needing 15 seconds, and a 1,200dpi 10 x 15cm photo 48 seconds. Copy speeds were less impressive, however - while ten black pages copied in two minutes, the same job took twice as long in colour. A duplex copy of a ten-page, 20-side colour original completed at just 2.6ppm, but at least it's good to have the feature.

The Expression Premium XP-7100 is versatile and capable, and for the most part it's quick, but we're not convinced it's worth the premium over significantly cheaper competitors such as Canon's TS6250, especially given that it costs about the same to run. If you don't need the flexibility of an ADF and extra paper trays, we're not sure we'd bother.

The Epson Expression Premium XP-7100 boasts quick print speeds and some handy features, but cheaper and equally capable competitors leave it somewhat in the shade