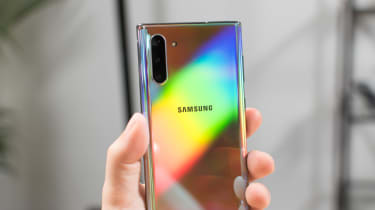 Samsung unveiled the Galaxy Note 10 and Note 10 Plus and a whole lot more at its 'Galaxy Unpacked' event on Wednesday.

The Korean smartphone giant showcased the latest models of its Note flagship, with included an upgraded S-Pen and a 5G version, along with a new Galaxy Book and an announcement from Microsoft.

There were no announcements about the troubled Galaxy Fold, still awaiting release, or the company's smart assistant Bixby, which seems to have been pushed into the background. But, there was still plenty of new things to get excited about...

It gets a little bit more interesting on the Plus, however, which has a massive 6.8in Quad HD+ AMOLED screen - the largest Samsung display to date - and a 4,300mAh battery. Under the hood is the Exynos 9825 processor, which has been built using a more efficient 7nm manufacturing process - similar to the Snapdragon 855 which a number of other manufacturers are using.

As with every Note handset, there is an S Pen and this year the stylus comes with a considerable upgrade. The S Pen can be used as a sort of wand, where mid-air gestures can make the screen swipe or zoom and it can even be used to skip songs.

Like the Galaxy S10 5G, the Note 10 will come with DeX, which was originally a separate docking station for the phone to connect to an external monitor but has now evolved into a more simple straight phone-to-computer connection. It's now entirely software-driven, just requires a USB-C cable, and can now be connected to a laptop.

The Note 10 wasn't the only hardware announced at Unpacked, with a Galaxy Book S laptop also unveiled. The computer promises a lot with a Qualcomm 8cx processor and a reported 23-hour battery life being touted by Samsung. The Windows 10-based device is ultra-thin, light and set for release sometime in September.

There was a special appearance from Microsoft CEO Satya Nadella, who came on stage to announce a deeper partnership with Samsung that aims to bridge the gap between Android and Windows PCs. Nadella said it was "a new chapter" in the two tech firm's partnership, where it will bundle its 'Your Phone' app on to the Galaxy Note 10.

The app mirrors Android text messages, notifications, and can even replicate your entire screen to a Windows PC. Samsung is also building OneDrive sync support directly into its Galaxy Android app.

All this helps give the impression that devices like the Note 10 are designed as mobile productivity powerhouses with access to tools that can be commonly found in enterprises of all sizes.