An amazingly compact barebones system, ideal for those who don’t need passive cooling 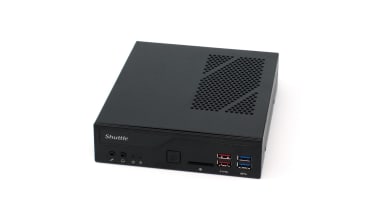 If you're not familiar with industrial computing equipment or barebones boxes, there's a good chance you're not familiar with Shuttle. The company produced small form-factor devices which are often used in factory environments and the like, but their usefulness isn't entirely restricted to manufacturing. Some of Shuttle's more user-friendly designs actually function rather well as compact, basic business terminals, and they're well worth taking a look at.

At first glance, it's easy to get the Shuttle DH370 mixed up with its industrial cousin, the DS77U7. They're both extremely compact black boxes, with the DH370 coming in slightly smaller but the DS77U7 weighing a fraction less at 1.24kg.

Where the DS77U7's processor is fixed and unchangeable, though, the DH370 is a full barebones system - and one that ditches passive cooling in favour of a dual-fan integrated heatsink. This pulls fresh air in at the top and pushes hot air out of the sides.

As with other barebones systems sharing its 65W thermal design profile CPU limit, once we added an Intel Core i5-8400 and 16GB of DDR4 RAM, it was no surprise to see the DH370 doing well in the benchmarks. While it could barely better its passive equivalent in the Superposition graphics benchmark, it thoroughly trounced it in our image editing, video editing and multitasking benchmarks, clocking up a score of 171 versus the DS77U7's result of just 51.

That performance comes at dual cost, however. Under load, the twin fans can get loud, and the presence of ventilation points at both sides mean the chassis lacks a vertical mounting option. A bigger problem is in power draw: with the active cooling keeping the 65W CPU from hitting thermal throttle and an evidently not-terrifically-efficient power supply, the DH370 hit a huge 98.7W under load. Contrast that to its idle draw of 10.2W.

The exterior design includes an interesting blend of new and old connectivity options: an RS232 and combined RS232/RS422/RS485 serial port can be found around the back, rubbing shoulders with two high-speed USB-A 3.1 Gen 2 and two USB-A 3.1 Gen 1 ports - with another two of each located at the front. There's also room for a 2.5in SATA drive, which is a welcome change from the smaller systems on test.

The design, though, loses a point for its cramped layout. Installation of its components is annoying, requiring that the heatsink is unscrewed and removed to access the RAM and M.2 SSD as well as the CPU - an awkward setup for later upgrades.

The Shuttle DH370 is a nifty little number, with a fairly robust range of ports combined with capable performance and all wrapped in a compact and space-saving package. It's not perfect - upgrades will be fiddly, and it sucks up power at a surprising rate - but it's a rather nice all-rounder for those that need a no-frills system.

This small-form-factor system may not have all that many bells and whistles, but it's a capable enough machine for those that want to do the basics well - with the added benefit of being user-upgradeable.