ASRock DeskMini 310 Series review: Bigger on the inside 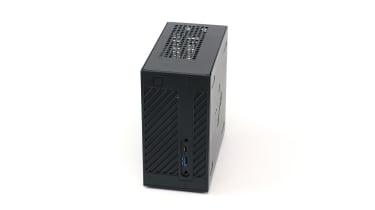 Most small-form-factor PCs force you to make some kind of compromise - usually in the area of performance. Space constraints often don't allow for adequate cooling, which means that CPU speeds are throttled to prevent overheating. In the case of this miniature marvel from ASRock, however, this is most certainly not the case.

Robbed of any sense of scale, you would think the ASRock DeskMini 310 Series was a full-size tower PC; it's only when you spot the size of the USB ports, or get up close and personal with it in the flesh, that you realise it seems to have shrunk in the wash.

Based on the STX form factor, smaller even than ITX, the DeskMini is a true barebones system: as standard it comes with only the case, power supply and motherboard. Everything else must be purchased separately and fitted by hand, making it the only system on test to come without some form of specialised CPU cooler.

There's not a lot of clearance inside, either. The chassis can only take low-profile coolers, and the wider of these can foul a motherboard heatsink.

Fitted with the recommended Noctua NH-L9i cooling (which is 38 including VAT from overclockers.co.uk), an Intel Core i5-8400 and 16GB of RAM, though, the DeskMini really shines. The case allows for an impressive amount of ventilation at an extremely low noise level - not as quiet as fanless systems like the QuietPC AMD Sentinel, but not something anyone could find objectionable.

With nowhere to fit a discrete GPU, performance is unsurprising - and effectively identical to the similarly specified Asus PB60. Having the flexibility to fit a range of processor types, though, means that it can be customised to fit a particular workload: fit a Core i7-8700 to get top performance from the motherboard, or a Pentium G5400T to tame the machine's 54.8W peak power draw as tested.

Idle power draw, sadly, isn't the DeskMini's strong suit: with the Core i5-8400 fitted, the machine refused to dip below 12.4W - higher than some of its (admittedly less powerful) rivals at load. More impressive is the case's ability to take two 2.5in SATA drives, which are tucked away on the rear of the removable motherboard tray.

A single year's return-to-base warranty, though, is a little miserly in today's market, and (unless you choose a custom-build option) only covers the motherboard, chassis and external power supply.

With surprisingly meaty performance for a barebones small-form-factor system, the ASRock DeskMini 310 Series is more than capable of handling the full range of office duties demanded from a workplace machine, and although it's not as space-efficient as some of the units we've seen, it's easily unobtrusive enough to slip out of sight under a desk or behind a monitor.

This compact ASRock system might not be as petite as some of its rivals, but a smart chassis design and powerful performance make it a good option for everyday duties - although beware the power consumption.