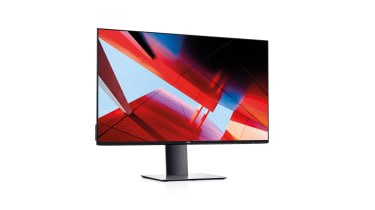 While it may seem odd to describe this 27in screen as expensive when we've recently reviewed an Eizo display costing almost 4,000, there's no hiding from the truth. You can buy a myriad of good-quality 27in 1440p screens for less than 300, so Dell must work hard to justify the premium.

One major benefit it offers over the cheaper competition is a USB-C connection. This hugely simplifies a desk setup as you can power the monitor via the single power cable (there's no external power brick) and then use USB-C to both transmit data and charge laptops that need a maximum of 65W. You can even hook up a second 1440p monitor via the DisplayPort, which is neat.

And Dell has worked hard to streamline other aspects of this UltraSharp monitor. The first sign of this is the tiny rectangular footprint, which is roughly the size of an A5 sheet of paper. That means you can squeeze it onto the narrowest of desks and still have plenty of work space. Note its narrow bezels, too. These aren't only for cosmetic benefit: you could happily place two of these monitors side by side, perhaps in portrait mode, for an enlarged workspace.

Another big selling point of this monitor over lesser rivals is its guaranteed colour accuracy. In standard mode, our review sample achieved an average Delta E of 0.43 with a maximum of 1.36. These are figures we would expect from a monitor designed for creative professionals, not an office-targeted screen such as the UltraSharp U2719DC. However, we might have simply been lucky. Dell promises an average Delta E of less than two, helpfully printing off a "Color Calibration Factory Report" so you can check your particular panel's performance.

Not all of this screen's test results were so excellent, though. We measured its contrast ratio at 961:1 - Dell claims 1,000:1 - which will mean lost detail in dark movie scenes. Gamma tracking is also loose at the extremes, which again is bad news for extra-dark and extra-light scenes. To massively simplify what this means, colours will display too dimly. And don't expect perfectly even brightness across the screen, with our sample displaying an 18% variation at the far left and 13% at the right.

Unlike the Eizo, there's no easy way to flick between colour profiles such as Adobe RGB and DCI-P3. Your choices are the more basic Movie, Game and ComfortView. The latter promises reduced blue light emissions, which some people find helpful if using a monitor for long periods. And Dell's OSD, while basic, makes it easy to switch between settings: simply press one of the four physical buttons sitting at the bottom right of the bezel and follow the context-sensitive menu choices. 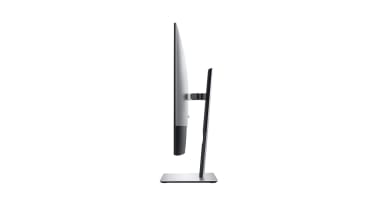 You can also download the Dell Display Manager. This offers a number of custom window layouts - for instance, you might want a big window on the left for your main work, with two small windows atop one another on the right - that you can then drag applications into. It's like a superpowered version of Windows Snap and genuinely saves time once you get used to the way it works. There are other nice features too, such as applying different modes to specific programs. So, if you want Windows Media Player to open in Movie mode, it can.

In truth, though, the Movie mode doesn't make much difference other than adding an orange tinge to the screen. We had hoped that activating it might increase the coverage of the DCI-P3 colour space, but in fact it only covered 68.3% on testing. We got better results when we tweaked the colour balance ourselves - the OSD again makes this simple - and hit 77.6%. That's still below the 85% that Dell claims.

This panel's gaming performance is fine, with no obvious tears or ghosting, but naturally this is a 60Hz screen not 144Hz or higher. If gaming is your priority, the affordability of gaming-tuned screens with higher refresh rates makes them a much better bet. Also note that the Dell UltraSharp U2719DC doesn't include speakers; there is a 3.5mm jack, but this is for outputting audio not inputting. There are also two easy-to-access USB-A ports on the left-hand side of the monitor, which will come in very handy if your USB-C-toting laptop doesn't have any of its own.

So there's a huge amount to like about this screen: guaranteed colour accuracy, compact design and that USB-C connectivity. While the first two elements on that list are welcome, they wouldn't be enough to make us part with our money - the panel's limited contrast ratio and other weaknesses ensure that. The real killer feature is USB-C support, which effectively means this screen can turn into a docking station at your desk. Connect one cable and you're done. If that appeals, the U2719DC is worth the price.

This monitor’s robust selection of ports, small footprint and even smaller bezels make it an excellent option for offices - although issues like a poor contrast ratio hold it back somewhat