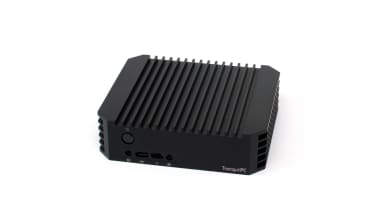 It's safe to say AMD's making something of a comeback these days; not only is it cropping up in more and more laptops and workstations, it's even making its way into high-end data centre hardware as well.

Still, it's unusual enough to see one of AMD's Zen-based Ryzen processors offered from a system builder; it's doubly unusual when it's one of the Ryzen Embedded family, soldered chips designed for low-power small form factor use - as found in this signage-focused machine.

Aesthetically-speaking, this PC is nothing too flashy - it's going for function over form, and while the chassis' flanges make it look more akin to a sci-fi spacecraft than some of the more reserved designs we've seen on other compact desktops, they're there to serve a practical purpose by transforming the metal casing into a passive heatsink.

A cover underneath the machine looks like it should allow access to internal components. Instead, it reveals the underside of the motherboard; accessing the two SODIMM slots and internal SATA connector requires that the motherboard is unscrewed and removed from the chassis. There's also no room in the case to fit a 2.5in SSD, sadly, so you're restricted to M.2 drives.

There's a reason for picking the Ryzen Embedded V1605B over any of its Intel equivalents: the integrated Radeon Vega 8 graphics processor, which drives an impressive four DisplayPort outputs, all of which can be used simultaneously. It's also responsible for the machine's surprising performance in the Superposition graphics benchmark, returning a 36.2fps average at the 720p Low preset. That's considerably higher than most of its Intel-powered competition. 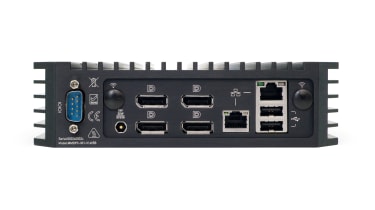 The graphics grunt offered by the chip does come at a cost, though, and that's its general-purpose performance: an overall score of 109 in our benchmark tests put it squarely in the middle of the pack when it comes to mini PCs, although this will likely still be more than enough for most use-cases. This is especially true if you're only wanting to use it to drive digital signage.

Four DisplayPort outputs make up most of the connectivity, with the most modern feature being a USB-C 3.1 Gen 1 port on the front alongside a USB 2 port. While the rear does have dual Gigabit Ethernet, there are only another two USB 2 ports for peripherals - meaning connecting external storage will be limited to the front USB-C port or run at a performance disadvantage.

With the ability to drive four simultaneous displays, this compact machine would seem highly suited to operating as a digital signage machine or powering a video wall. However, the comparatively high price compared to devices like the Raspberry Pi 4 make it a somewhat uneconomical choice, unless you need a bit of extra muscle in terms of pure horsepower. For general-purpose computing tasks, there's also better choices out there, leaving this compact PC caught between two worlds.

While this mini PC is built for driving digital displays, its high price and somewhat underwhelming performance mean there are better-value choices depending one whether you want something for powering video walls or for general-purpose computing.