Asus ProArt PA34VC review: Good, but not quite good enough

This pricey panel takes aim at designers and creatives. Does it have the quality to succeed? 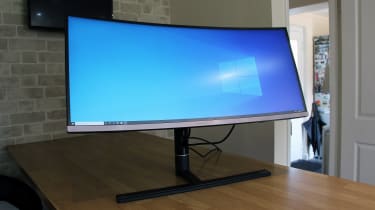 The Asus ProArt PA34VC is a large, curved panel with a widescreen design and a set of features that take aim at designers and digital artists. It's certainly impressive on paper, but its 875 exc VAT price means that it's more expensive than its key rival the BenQ DesignView PD2720U, which arrives with a 27in panel and a cost of 728 exc VAT. Can it justify the extra cost for creative professionals?

As its name suggests, the ProArt has a 34in diagonal, and the increased physical size is paired with a 1900R curve. That radius is a little higher than the more common 1800R design, and Asus claims that the gentler curvature does a better job of maintaining consistent viewing angles while reducing reflections and eye movement. In reality though, the difference between 1800R and 1900R is tiny and both types of curve are similarly beneficial.

The Asus also uses IPS technology and has 100Hz AMD FreeSync. This makes it better at displaying smooth motion - good for certain tasks, like animation, and some after-hours gaming.

It stretches a resolution of 3,440 x 1,440 across its 34in diagonal, which means a density level of 110ppi. The size and resolution are absolutely fine for work - the Asus' design means you get loads of room to spread applications around, and the screen itself is crisp enough to do a good job with fine details. It's possible to get a sharper experience on 4K panels, but most creative professionals won't be hugely impacted by this - the Asus is detailed enough to get the job done.

Elsewhere, Asus claims 100% sRGB gamut coverage, and support for HDR10 content - the same standard used on most HDR TVs. Asus also claims a sub-2.0 Delta E average thanks to factory calibration, and it also has hardware calibration - although you need to provide your own colourimeter.

That's a solid start for sRGB and HDR work, but other panels go further with the ability to handle the DCI-P3 and Adobe RGB colour gamuts as well. The former is used for HDR creation, while the latter is crucial for Adobe's design apps. 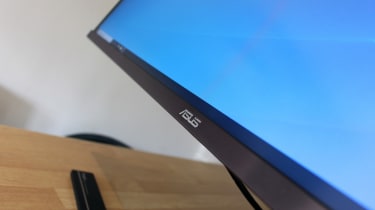 The Asus doesn't handle the DCI-P3 and Adobe RGB gamuts, and some other peripheral features are missing - some other screens have KVM switches, for instance, which allow users to display content from two systems while using a single keyboard and mouse. Happily, the usual range of picture-by-picture and picture-in-picture modes are available.

This monitor is a good-looking machine: it's got slim bezels, a brushed metal finish and a stylish, circular stand. It's easy to build, with no screws required - the base and stand arrive assembled and snap into the panel. Build quality is middling though; the back of the screen is strong, but the panel does wobble a little on the sleek stand. It won't be too much of a problem when it's in position, thankfully. Also bear in mind that the Asus' overall width of 815mm means you'll need to take measurements to make sure it'll fit on your desk.

The Asus serves up 120mm of height adjustment, 28 degrees of tilt and 60 degrees of swivel alongside VESA 100mm mount support and a cable-routing hole. That's fine, and entirely normal for this kind of panel. However, plenty of non-widescreen panels also pivot to portrait mode, and the Asus can't do that.What it can do is offer two HDMI 2.0 ports and a DisplayPort socket alongside two Thunderbolt 3 USB-C connectors. That latter pair can be used as display outputs, and each can also supply 60W of power for charging external devices like laptops. The Asus also has three standard USB 3.0 ports.

The OSD is good, too. It's no-nonsense, fast and responsive, and is navigated by a snappy joystick. There are quick-select options for inputs, brightness and blue light filter adjustment, and the main menu's first option provides a list of the various screen modes - so switching is easy. Elsewhere, there are loads of colour options and conventional settings throughout.

Out of the box and with the backlight at maximum strength, the Asus served up a brightness level of 287cd/m2 and a black level of 0.24cd/m2. Those figures create a contrast ratio of 1,195:1 which is ample for design and photography. The black level is 0.1cd/m2 better than BenQ's DesignView PD2720U, which means the Asus beats it in contrast - the cheaper BenQ only managed 1,038:1. The Asus has enough brightness to provide high-end punch, and its better black levels add more depth to darker scenes. That better contrast means more vibrancy, and better gradation throughout. 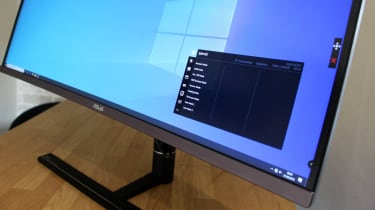 The Asus' initial colour temperature of 6,890K is fine - not far enough away from the 6,500K ideal to cause serious trouble. Its Delta E of 1.67 is excellent, and so low that human eyes can't detect discrepancies. Gamma is great, too, and these figures were maintained with the brightness reduced to a more moderate level.

The Asus continued to impress in key screen modes, with its Delta E and contrast figures improving even further in the sRGB mode. Rec. 709 mode delivered good results too - which is important for certain broadcasting standards.

The Asus is a good performer. It's got contrast and colour accuracy that can handle most work tasks, and it continued to return good results in its various screen modes. Its uniformity is solid, too, with very small backlight divergence across the widescreen display. The BenQ does technically have slightly better colours, but the differences between the two screens are barely noticeable - and the Asus has improved contrast and deeper black levels, so we prefer this panel.

The Asus' HDR simulation mode ramps the brightness up to 316cd/m2, but the contrast and Delta E levels remain consistent. So, while you get extra punch from that jump in brightness, the Asus doesn't pair that with improved contrast - so there's no extra depth and no deeper black levels. HDR content will look a little brighter on this screen, but this isn't a viable panel for proper HDR work.

The Asus ProArt PA34VC is eye-catching and has good practicality: its widescreen design makes for a larger viewing environment than its key rival, the curve helps, and connectivity is good. 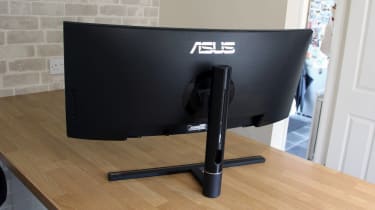 Image quality is largely superb: the Asus serves up excellent contrast, colour, gamma and black point measurements that either match or beat the BenQ, and its uniformity is solid.

It's not perfect, though. 4K panels are crisper, so certain tasks will benefit from the better density available elsewhere. The Asus also can't handle Adobe RGB or DCI-P3 work as well as others - so it's not the best option for certain design or HDR tasks.

However, if you work across a wide variety of tasks in the sRGB or Rec.709 colour spaces, or in conventional design and photo applications - and need more width and a larger screen - then the Asus will fit the bill.

The Asus ProArt PA34VC boasts great quality, solid design and loads of features, but it’s undermined by the fact that it can’t handle certain professional workloads