An old-style Intel NUC wrapped in a new, fanless housing 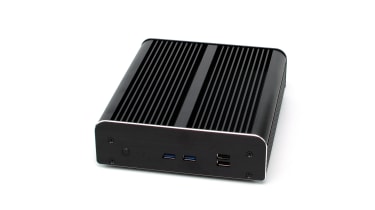 The QuietPC UltraNUC Pro 7 Fanless is an interesting beast, because it's not really its own machine: it's one of Intel's seventh-generation Next Unit of Computing (NUC) systems, removed from its original housing and installed in a third-party case, along with any upgrades you fancy specifying at the point of order.

The reliance on using an original NUC system as its base means you won't find the same processor options as other systems in QuietPC's catalogue: the seventh-gen Core i3-7100U - as reviewed, explaining its poor showing in our multitasking benchmark - and i5-7300U chips are options for the reviewed Akasa Newton S7 case, with the Core i7-8650U limited to the larger Plato X7. This provides improved (but still passive) cooling at the cost of an increased footprint.

Elsewhere, there's 8GB of DDR4 RAM (with no free slots for upgrade, sadly) and a 500GB M.2 NVMe SSD. There's no dedicated GPU either, so you can forget about using this for any workstation duties. As we mentioned earlier, its benchmark scores betray its ageing components; the UltraNUC Pro 7 racked up an overall score of just 37 in our tests, which belies a system that will struggle under load.

Switching from the stock NUC case to the UltraNUC is a trade-off: the system becomes a lot larger than it was designed to be, but the annoying stock fan is ditched in favour of using the finned case as a giant passive heatsink. It's still not a large machine by normal standards, measuring 177mm across and 61mm high, but it's bigger than most of its competition and with a weight of 1.7kg, it's heavier too. 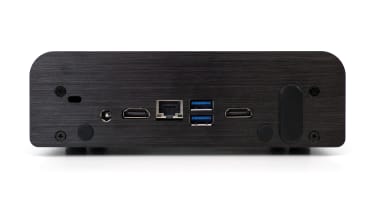 Opening the UltraNUC up - aided by QuietPC's "open box" warranty terms - reveals the size difference between the original NUC board and its larger new case. The manufacturer has employed some workarounds to adapt the board to its new home, including using USB extension cables to bring the two front-facing USB 3 ports across to the new case's front panel.

Sadly, there's not much a new case can do for the NUC's limited selection of ports: the front features two USB 3 and two USB 2 ports, while the rear has two HDMI ports, a Gigabit Ethernet port, and two USB 3 ports, plus rubber-bunged cut-outs for optional Wi-Fi antennas and an included RS232 breakout cable.

That's a competent enough selection of ports, but it's markedly less than other mini PCs we've seen, and the lack of USB-C connectivity is particularly disappointing. This limits its versatility, as does the fact that Wi-Fi isn't included as standard.

The UltraNUC Pro 7 wins some points for swapping out the annoying fan of the board it's based on in favour of a passive heatsink, but the age of the 7th-gen Intel CPU at its heart is really starting to show. The Intel Hades Canyon NUC - based on a newer version of its NUC board and incorporating an 8th-gen Core i5 processor - offers more than three and a half times the performance of this device for a slightly cheaper price.

It is still relatively compact, especially compared to the chunky Hades Canyon, so if you want a smaller machine that still offers quiet, fanless operations, then the UltraNUC Pro 7 is worth a look. For performance though, you're better off elsewhere.

Moving to the UltraNUC won’t win you extra performance, but if you like Intel’s NUC and want to ditch the fan, the UltraNUC family is worth considering.