This 4K videoconferencing kit can grow along with your businesses 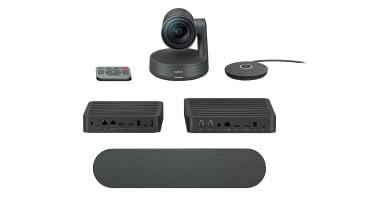 Don't be fooled: the Rally isn't a new racing wheel or tennis racquet, but Logitech's latest professional videoconferencing solution. Designed for medium to large meeting rooms, it's a modular system that can be expanded with extra accessories, allowing it to grow with demand.

Centre stage is the Rally Camera, a 4K unit that can be either desk or ceiling-mounted. It offers motorised pan/tilt/zoom operations with a 15x optical zoom, and draws power via a USB-C port, enabling it to be used either in standalone mode or connected to the Rally room system.

The next module is the Display Hub, which provides a central point for connecting the camera, plus up to two Full HD or 4K displays and the chunky Rally Speaker. The single speaker that's included will be fine for most purposes, but go for the Rally Plus kit and you get a pair for the full stereo experience.

The Display Hub also connects (over a standard Ethernet cable) to the Table hub, which provides dual HDMI-in ports and a port for the Rally mic pod. Again, the base kit includes only one of these, but up to seven pods can be daisy-chained.

When it comes to arranging the hardware around your meeting room, the Rally system is supremely flexible. You can connect your host computer to either the Display or Table hub, depending on your preferred layout. The speaker's captive mini-XLR cable is a generous 3m long, as are the microphone pod cables - and for really large spaces, the hubs will accept customer-supplied Ethernet cables of up to 5om.

All of these parts and connections mean that the Rally isn't exactly a plug-and-play proposition. It took us 20 minutes to get everything set up - although, to be fair, this is a one-off procedure as the Rally is designed to remain static after installation.

And with this done, connecting the system to our Windows 10 host was wholly painless. All the devices were detected as soon as we plugged them in, and the camera and audio drivers were set up automatically. The free Logitech Sync app identified all Rally components and installed the latest firmware in ten minutes.

The Sync app also integrates with Logitech's cloud portal, which will soon allow remote management of multiple meeting rooms. You'll have to be a little patient, though: this is currently in private beta and won't be available until the end of the year. You do, however, get Logitech's RightSight technology, which automatically moves and zooms the camera to focus on whoever's speaking at the time, much like the Meeting Owl and Poly Studio systems.

Still, even as it stands, the Rally system is a winner. All our meeting participants were impressed with the camera's clarity and natural-looking colours. They were also taken by its RightLight feature, which compensates for background light so participants sitting near a window aren't reduced to silhouettes - although this will be a shame for anyone who likes to bring a bit of classic Blofeld flair to their meetings.

The camera responds instantly to remote handset commands, and parks itself with the lens pointing straight down when not in use, so you can see it's not watching you. The speaker meanwhile delivers crystal-clear sound with punchy bass - and it's powerful enough that our participants said anything over 40% volume was too loud for our 6.5m meeting room. Remote callers also reported that the microphone pod worked very well, allowing them to clearly hear all our participants regardless of where they were sitting.

The Rally is ideal for businesses seeking a 4K videoconferencing solution that can grow with them. Even though not all features are yet present, video and audio quality is beyond reproach and you get a great set of hardware for a very reasonable price.

Even with some features still to come, Logitech’s Rally is a highly versatile 4K videoconferencing solution at a great price