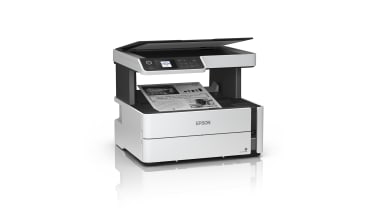 Epson's 'refillable' EcoTank printers turn traditional printer designs on their head. They're considerably more expensive than conventional inkjet printers, but the low cost of replacement inks, and the high capacity of the printer's refillable ink tanks, mean that long-term running costs and total cost of ownership (TCO) are much lower than printers that use traditional - and expensive - ink-cartridges.

The disadvantage of the refillable design is that earlier EcoTank models - such as the ET-2710 that we reviewed recently - have tended to offer quite limited performance and features, and have mainly been aimed at home users, rather than business users who need a fast and versatile workhorse printer for their office. However, Epson has recently expanded the EcoTank range with a number of faster, mono-only printers that are very much aimed at businesses that want to reduce their day-to-day running costs.

Epson introduced the new EcoTank Mono range earlier this year, with prices starting at around 175 inc.VAT for an entry-level, single-function (printer only) model designed for personal use. However, the new ET-M2170 is a more versatile multi-function printer, with good speeds and connectivity that make it suitable for small and medium size offices, although it now steps up in price to 283 exc VAT (340 inc VAT).

The ET-M2170 is a mono printer with built-in scanner and copier, with both devices offering a resolution of 1200x2400dpi. The design, admittedly, is a little odd as printed documents are fed out of the top of the printer - rather than the front - and this means that the scanner unit has to be raised up on two legs so that it sits well above the main printer unit. 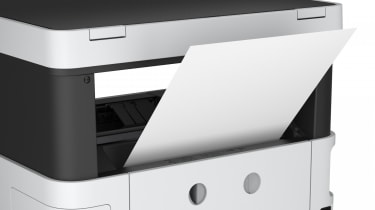 That design has its advantages, though. One tell-tale sign of cost-cutting with the ET-M2170 is the small LCD control screen - just 1in square - but placing the controls up on the scanner unit does make it easier to see without having to bend over and peer at the tiny little screen. The top-mounted output tray also means that the printer has a very compact footprint, measuring just 375mm wide, 345mm deep and 300mm high.

The internal paper tray holds 250 sheets of A4 paper, with the mono print speed rated at 20ppm, and a recommended monthly duty cycle of 20,000 pages, so it should be able to cope with quite heavy workloads in most small and medium size offices. The printer software includes a 'duplex' option for printing on both sides of the page, and there's a manual feed at the back of the printer for envelopes and other types of paper, so you don't have to empty the main paper tray just to print an envelope every now and then.

The ET-M2170 provides better connectivity than most of the other printers in the EcoTank Mono range, with both USB and wifi, as well as an Ethernet port for offices that prefer to use a wired network. The printer also supports Apple's AirPrint for iOS devices, along with Google Cloud Print for Android. Epson's own iPrint app provides scanning functions for mobile devices, and there's also a remote printing option that allows you to send documents to the printer from any outside location where you have Internet access.

Speed has never been a great strength of the EcoTank range, but the ET-M2170 is certainly one of the fastest models Epson has released so far. Epson quotes a speed of 20ppm for the ET-M2170 and it came pretty close to that in our tests, producing a speedy 19ppm when using its standard-quality setting. The printer's draft mode was slightly faster, stepping up to 25ppm, although the rather faint text would probably only be suitable for printing up rough notes or the occasional memo. 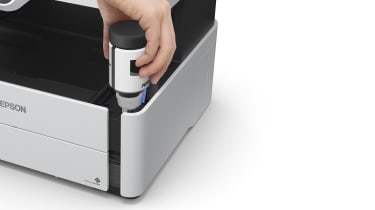 There may also be times when you need to print documents that contain some colour graphics - albeit converted into mono in this instance - and the ET-M2170 still proved quite speedy here, producing 16.5ppm with our mixed colour test file. As you'd expect, duplex mode is somewhat slower, but the ET-M2170 managed to produce a respectable 8ppm in duplex when printing on both sides of the paper, and the overall performance of the ET-M2170 should be more than adequate for most small and medium size offices. Our only real complaint here is that - as we found with the ET-2710 - the paper feed mechanism is fairly loud, so you probably won't want the printer sitting on a desk right next to your PC all day long.

Text output is impressive, though, with crisp, finely detailed text that could give a laser printer a run for its money. Graphics quality is good as well, with smoothly graduated shades of grey on our graphics files. There was a slight loss of detail on darker areas on our photo test file, but a mono printer such as this is primarily intended for printing text and relatively simple graphics, such as graphs and charts, so that's certainly not a deal-breaker.

Scanning and copying speeds aren't quite so impressive, though. Copying an A4 mono page took 11 seconds, while the scanner needed 10 seconds to preview an A4 mono document. A final scan at 300dpi took 12 seconds, but scanning at the maximum 1200dpi resolution took a leisurely 65 seconds. There's no automatic document feeder either, so the focus with the ET-M2170 is very much on speedy printing for mono text documents, with only occasional use of the scanner and copier functions.

But, of course, the real appeal of the EcoTank range lies in the low cost of the bottled inks that are used to re-fill the printer's internal ink tank. The ET-M2170 might seem very expensive when compared to a conventional, cartridge-based inkjet printer with similar features and performance, but that price also includes two large bottles of black ink, which Epson states should last for 11,000 pages of mono printing. So while the up-front cost of the ET-M2170 is relatively high, many businesses may find that it's a year or more before they need to worry about buying any additional ink at all.

When you do need to buy refills, you'll find that the bottled black ink costs just 13.40 (inc VAT) and lasts for 6,000 pages per bottle, bringing running costs down to just under 0.25p per page - far cheaper than any conventional inkjet printer that relies on expensive cartridges. And, if your business needs to print even more documents than that, Epson has recently introduced an 'EcoTank Unlimited' option, which costs 33.33 excVAT (or 39.99 inc.VAT), and provides unlimited ink for two years.

We have to give Epson credit for continuing to develop its 'refillable' printer technology- while rivals such as HP are clinging to their expensive cartridge-based designs. And while the EcoTank ET-M2170 does initially seem quite expensive when compared with conventional inkjet printers that offer similar features and performance, the low cost of its replacement inks ensures that this is a workhorse printer that can really earn its keep in the long run.

Anyone that needs a colour printer should obviously look elsewhere, but if your business needs to print high volumes of mono documents every month then the low running costs of the ET-M2170 will be hard to beat.