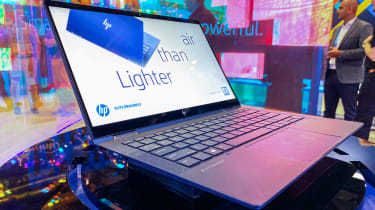 The last few years have seen a string of high-end devices storm the market, each staking a claim to be the best and most business-friendly as the competition to service high-end users has ramped up. In recent years, 360-degree 2-in-1s have become sleeker, more powerful and almost indistinguishable from fully-fledged notebooks.

The trick has always been to build a device that's as portable as possible without falling into the trap of compromising on functionality or performance. Dell has been considered among the leading Windows manufacturers in recent years, setting new standards for performance and portability with its 2018 Dell XPS 13, while the Latitude and 2-in-1 XPS devices have also been very well-received.

HP has been hot on its heels, however, churning out a production line of business-friendly units; most recently the outstanding HP EliteBook x360 830 G6. While HP's business units are fine devices, the Elite Dragonfly takes a different path, diverging from conventional HP 2-in-1s in appearance, design and even nomenclature.

It may be stylish, but business customers are generally comfortable sacrificing looks if it means stronger functionality, performance and portability, so the Dragonfly needs to really put its money where its mouth is to prove itself as the XPS-killer it hopes to be.

The Dragonfly departs from the general look and feel of previous models in the Elite series, with HP consciously setting out to build a machine that stands out from the blacks, silvers and greys that dominate the high-end market.

Users will immediately be drawn to the Dragonfly's slender chassis, dipped in a stunning midnight-blue hue. The design itself is breathtaking and certainly hits the manufacturers' targets of producing a machine that stands out from the rest of the pack. The hue is also iridescent, meaning the darkened blue shifts as the light strikes its body, while a more vibrant shade is used to highlight the touchpad, providing a satisfying contrast. The Dragonfly's only downside here is that its chassis is a magnet for fingerprints, and needs to be wiped routinely if you're keen to preserve its iridescent polish.

HP isn't the first manufacturer to try something like this; the Dragonfly bears a strong resemblance to the stunning Asus ZenBook Flip S. But this is something of a refined version, ditching the ZenBook's gold trim and wrapping the display in much thinner bezels.

Its chassis is satisfyingly compact and sturdy, constructed from a single piece of magnesium alloy. Its dimensions go toe-to-toe with some of the sleekest machines in the 13.3in bracket, only fractionally larger than the remarkably compact Dell XPS 13.

With a height of 16mm, it's slightly thicker than both the XPS and the Huawei MateBook X Pro, which measures 14.6mm despite being fitted with a 14in display. It's easily more compact that the Lenovo ThinkPad x390 however, which is slightly larger on every front including a 16.9mm thickness.

Despite being a 2-in-1, the Dragonfly looks like a conventional notebook when it needs to, with 360-degree rotation working well to transition the device into its tablet-mode. A faint wobble in the lid of the pre-production unit we tested, however, meant that it wasn't always sturdy when bending the display and standing the Dragonfly up as a tablet. This could be an issue isolated to the specific machine we examined, however.

It's worth mentioning the extent to which HP has attempted to make the design and build meet its sustainability targets. The keyboard, for example, is made using HP's rubber-dome design, which features recycled materials, while the blue paint wrapping each device is water-based as opposed to oil-based.

The HP Elite Dragonfly is fitted with three variants of its 13.3in IPS touchscreen LCD display, including a 1080p Full HD screen, Full HD with HP's built-in Sure View' technology, and a 4K UHD HDR version also fitted with the Sure View security feature. 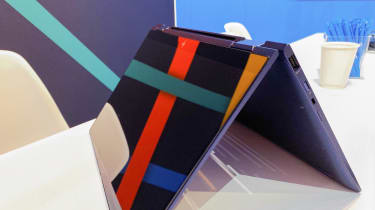 For reference, Sure View refers to a technology that dims and fuzzes the display when it's viewed from wider angles, and aims to combat the potent success of visual hacking', or unwanted shoulder surfers'.

Manufacturers appear to be engaged in an arms race to narrow the bezels encasing their displays, with the latest Elite 2-in-1 featuring a 42% narrowed top border and 14% narrowed side borders versus the Elitebook x360 1030 G4. The Dragonfly's screen spans nearly the full width of the casing, but the fact the top border is thicker means the Dell XPS 13 still feels more expansive despite technically covering a slightly lower proportion.

These are promising claims given the screen is incredibly glossy, and would naturally demand a high maximum brightness to use in well-lit or sunny conditions. Notebooks and 2-in-1s generally don't exceed around 550cd/m2, and the 531cd/m2 of the Huawei MateBook X Pro is among the brightest we've tested.

Colours are generally bold and vibrant to the naked eye during video playback, but without testing it's difficult to demonstrate how this stacks up against competing devices. HP claims the colour accuracy of both 1080p displays hits a 72% coverage of the NTSC colour gamut, equivalent to 99% coverage of the sRGB colour gamut. The 4K iteration, meanwhile, is touted to reach an sRGB coverage of 95%.

Touchscreen functionality is also improved compared to the previous Elitebook, the manufacturer claims, while the machine is packaged with a third-generation touchscreen pen.

The expansive keyboard fitted into the HP Elite Dragonfly slots tightly between a pair of B&O speakers, and its rubber-dome design keys are well-spaced and large. The materials used when building the keyboard means its keys hardly make a noise when tapped, but still boast an impressive 1.5mm travel distance and strong force feedback. 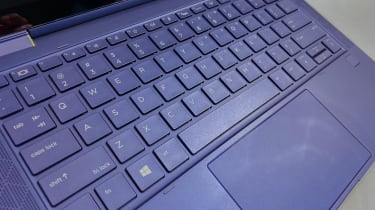 There are also two backlighting settings for varying lighting conditions, and a range of functional' keys that light up when used, including the keys that direct the 2-in-1's call functions. The one placement issue we noticed was the minimisation of the Enter key, which means you're prone to accidentally tapping the Backslash key instead when reaching over with your little finger.

The glass-coated touchpad, meanwhile, is highly spacious and is smooth to the touch. The left and right-click buttons too feel very satisfying to use in light of strong force feedback, while hardly making a sound.

Although CPU configurations have not yet been finalised, HP has confirmed the Dragonfly will feature 8th-gen Core i5 and i7 quad-core Intel processors built on the Whiskey Lake architecture. A demo unit we examined was fitted with a quad-core i7-8665U processor, launched earlier this year, with the Dragonfly also potentially featuring Intel i7-8565U, i5-8265U, i5-9365U, and i3-8145U CPUs, according to a preliminary spec sheet.

HP has also teased that a refreshed iteration of the 2-in-1 next year may feature Intel's 10th-gen Ice Lake chips, announced in August. There's a chance the Dragonfly's 8th-gen iteration may not compare well against its key rivals in terms of performance or battery life upon release, given many may have already made the leap to 9th and 10th-gen chips, namely the upcoming XPS 13 2-in-1 and Lenovo Yoga C930.

The Dragonfly is fitted with up to 16GB RAM, which is fixed, and up to 2TB SSD capacity. The base model will feature either 128GB or 256GB of storage, subject to HP making a final decision. It does, however lack dedicated graphics, with all configurations featuring the Intel UHD graphics processor. This suggests it's not a machine built for hardcore graphic designers, but the highest-end configuration will certainly be powerful enough for basic photo and film editing.

Chief among the strong claims HP has made around the Dragonfly is that of a maximum battery life of 24hrs 30mins. This would render the 2-in-1 battery's possibly the strongest on the market, but we'll have to test it before we can confirm this. This is also true for its fast-charge feature, which HP claims can reach 50% within 30mins while the device is switched off. This, again, would be staggering. 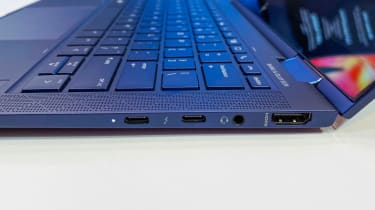 The HP's ventilation system has been redesigned somewhat with fans on the rear of the device touted to cope with high-intensity workloads, while still allowing the 2-in-1 to fall under the sub-kilogram weight category.

The HP Elite Dragonfly features a wide array of ports, including 2 USB-C ports with Thunderbolt 3 support, a USB-A 3-1 port, 3.5mm headphone jack, HDMI 1.4 and an external Nano SIM slot. It's an impressive collection, with the only thing missing an SD or microSD card slot.

The SIM card slot alludes to the 2-in-1's excellent connectivity features, including Wi-Fi 6, 4G and LTE compatibility. HP has even fitted antennae into the upper portion of the display to reduce latency and improve signal, although how much difference this will make, again, is subject to testing.

The Dragonfly's webcam underlines a set of strong security and privacy features that includes facial recognition technology compatible with Windows Hello, as well as a well-hidden slider that users can flick to block the webcam feed.

Speaking of Windows Hello, there's also a small fingerprint sensor located an inch or so beneath the keyboard, said to feature technology that captures pixel values as opposed to one-dimensional scans.

Elsewhere, HP's Dragonfly features its full suite of security tools, including privacy-focused Sure View, which can be flicked on in compatible displays by pressing the F2 key. HP's security suite also features Sure Sense AI anti-malware scanning capabilities, which serves as an additional layer of security to complement rather than replace antivirus software.

Based on first impressions, this well designed 2-in-1 appears to offer everything you'd expect from a high-end premium convertible, while looking good in an iridescent darkened blue. The only downside would appear to be its cost, starting at a premium 1099 exc VAT for the lowest-end configuration. 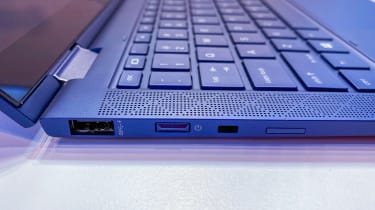 The sub-kilo weight category is inevitably a big sell, and when coupled with its slender dimensions gives the Dragonfly a chance to cement its credentials as a highly portable unit. A strong collection of ports and security tools, too, suggests HP has refused to compromise on functionality.

The quality of the display looks promising but claims of a 24 hour-plus battery are likely to raise the most eyebrows. Performance, meanwhile, will depend on how well its components function in tandem with each other, as well as the Dragonfly's ventilation system. All these aspects, however, will need to be tested further.

For a number of years, the XPS 13 has been considered the most powerful and business-friendly Windows machine on the market. While our hands-on assessment of the Dragonfly is hardly conclusive, HP's stunning 2-in-1 has a real chance to steal Dell's crown.