Microsoft HoloLens 2 hands-on review: A flash of things to come 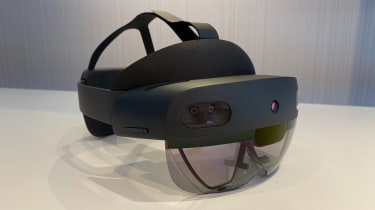 Imagine a workplace in which you can visualise anything you need on-demand, with relevant data available at the jab of a finger. Mixed reality is a beast that a litany of tech companies have attempted to tame for years, but the tech hasn't always been there. While Facebook went all-in on the Oculus Rift virtual reality (VR) experience, the likes of Microsoft, Google and Apple turned instead to augmented reality (AR).

The ill-fated Google Glass is perhaps the most widely-cited example of a piece of AR tech that has failed to take off. Google's hardware eventually found its feet in the enterprise space, which Microsoft's HoloLens was pitched at from the get-go. Although use cases for AR projects weren't vast, they are compelling in areas such as engineering and medicine.

With the HoloLens 2, Microsoft is looking to build on the handful of enterprise successes it has carved in the last five years, based on customer and user feedback. Specifically, the firm has looked to address ergonomics, immersion, and what it dubs time-to-value'.

With many businesses still unconvinced about the potential for deploying AR in and around the workplace, Microsoft has taken up the task of convincing sceptics why this quirky, holographic headset deserves a more prominent role in business.

The HoloLens 2 bears a striking resemblance to the original HoloLens, with the most significant design tweaks reserved for what the eye can't see.

The headset feels well-built and compact, while the visor features the same darkened tinge as its predecessor. This is attached to an adjustable band that fits around a user's head. The device itself is almost entirely clad in matte black and features an additional cushioned pad that cups the frontal bone just above the forehead. Overall, the device wouldn't look too out of place in an 80s sci-fi flick.

It's largely in terms of weight distribution where the biggest differences lie. One of the three key areas Microsoft has taken pains to address is user comfort; specifically how long workers feel comfortable wearing the thing. There isn't much of a difference on the face of it, with the previous HoloLens weighing 579g against a marginally lighter mass of 566g.

However, where the first HoloLens front-loaded all the hardware to be fitted just above the visor, the latest edition has distributed the internals more evenly across the band. The battery, for instance, is now fitted in the back. This means the strain on the neck is reduced, and users can actually fit the device around their heads far more easily.

The idea is that employees can now comfortably wear the device for multiple hours in a working day where previously there were recommended to wear the HoloLens for no more than an hour or two at a time. As with the previous model, the internal hardware isn't rested directly on a user's head; rather the headset is attached to a second concentric headband that sits within the device and can be adjusted to fit the user.

The second point that Microsoft looked to address was the immersion factor. Holographs were previously consigned only to a narrow field of view of only a few square inches that immediately removed users from the immersive experience. The methods in which users could interact with them, too, were restricted to confusing and inconsistent gestures which had to be pre-learned.

With the HoloLens 2, employees can exploit a much wider field of view, as well as more intuitive gestures that fit around natural interactions used in day-to-day lives; think pinches, pulls and drags. Altogether the changes make for a substantially improved immersive experience, although it's clearly still restricted to rigidly-defined parameters. 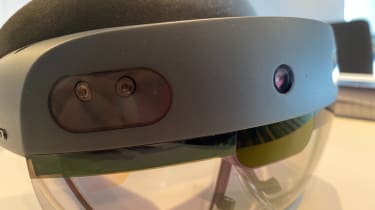 The HoloLens 2 display, meanwhile, comprises a 2K (2048 1536) resolution in a 3:2 format versus the 720p resolution at 16:9 fitted into the first edition. The holographic density, which refers to the visual quality and accuracy of the actual holograms, remains unchanged. This is based on Microsoft's own unit of measurement of >2,500 radiants, also referred to as light points per radian'.

Viewing the holograms isn't akin to viewing images on an LCD display. It's quite a surreal experience in which the holographs' borders are defined, yet their colours fuzz and jitter. It's like viewing images through an old CRT monitor, in one sense, except for the ability to interact via tugs, pulls, pinches and taps. Even the menu design smacks of Windows systems from a bygone era, although these presumably won't be adopted in every piece of software servicing the HoloLens 2.

That said, the interaction is satisfying and clever. Eye-tracking technology, for example, enables auto-scrolling that learns how quickly you can read through a passage of text, and speeds up or slows down depending on your progress. The software, too, can recognise hand gestures and respond promptly. One demo, for example, demanded the user move a hummingbird across the field of view based on the position of their open palm. Turn your hand around so that your palm faces down, and the hummingbird flies away.

The HoloLens 2 features a raft of hardware improvements on the original headset. These include an array of improved sensors, namely four visible light cameras, two infrared cameras, a depth sensor, accelerometer, gyroscope and magnetometer. Its 8MP camera can also capture still photographs while shooting video in 1080p resolution in 30fps. This is an improvement on the 2MP camera featured in the previous HoloLens.

The inclusion of a USB-C port in particular, against the Micro USB featured in the original device, is much-welcomed. The HoloLens 2's battery life is also improved from the first iteration's 2-3 hours, although exact figures are not yet available.

For Microsoft, the key to earning the HoloLens 2 an established role in businesses has been and will continue to be the applications and software that developers can write on top of the infrastructure that it provides. 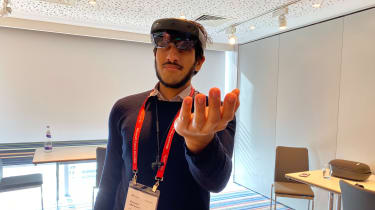 The final area the firm strived to address was in the time-to-value', which, for developers, means how quickly and easily one can develop software for businesses. Microsoft wants the HoloLens 2 to feature out-the-box Microsoft applications that fit in an app ecosystem akin to Office 365. To some extent, the firm is already worked towards this with Dynamics 365 integrations, such as Dynamics 365 Remote Assist and Dynamics 365 Guides. In addition, Microsoft boats 150 development partners who are building industry-specific services, such as those for customers in manufacturing or in healthcare.

Given the HoloLens 2 is still in its early development, the amount of enterprise software available is to be determined, and will depend entirely on how developers manage to work with the platform.

Whether or not the HoloLens 2 is fit for business is a question that each business needs to answer itself. AR is still an embryonic technology, with its potential far exceeding anything the likes of Microsoft or Google can actually offer customers right now. Microsoft, for example, has hinted at features like IoT integration in future iterations of the hardware.

The HoloLens 2, however, may well have a place in certain organisations, but only if that organisation can work with Microsoft to establish the best use case. Manufacturing, for example, is one area where the product has clear applications, as is training and computer-aided design (CAD). Surprises will most likely emerge too; for instance, Microsoft learned the original HoloLens became popular among doctors who prepared for surgery by assessing holograms of a patient's MRI and CT scans.

The HoloLens 2 appears to be an incremental step forward for enterprise AR, but a step forward nonetheless. Its success will rest on whether Microsoft can do enough to convince organisations of the emerging use cases and ensure the apps are there for businesses to take advantage of from day one.