Our favourite equipment from the past 12 months

There’s something indefinably exciting about getting a new piece of hardware to play with; whether it’s a smartphone or a server, there’s a certain joy in unpacking a new device and getting to grips with its capabilities, seeing how far you can push its limits.

As 2019 draws to a close, we’re taking a look back over the best products of the year. It’s been a strong year in most product categories, with new iterations of some of our favourite ranges. Although this year hasn’t seen the release of any particularly revolutionary products - and we’re discounting foldable phones, as they haven’t been widely released as yet - there have been some strong showings across the board.

Here, then, are our hand-picked awards for the top products of 2019. 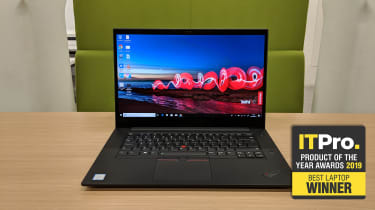 Lenovo’s monster ThinkPad X1 Extreme is a masterclass in how to create a £2,000-plus laptop that still feels like good value. This sleek machine packs an outstanding touchscreen display, powerful components and the ThinkPad’s reliably excellent keyboard into an attractive and relatively portable chassis, blending serious horsepower with boardroom looks.

As if that wasn’t enough, the X1 Extreme also includes a number of business-friendly features, including security and privacy protections and even eye-tracking features to help boost productivity. It may be expensive, but if you need a do-it-all laptop, the Lenovo ThinkPad X1 Extreme is tough to beat.

While not quite as outstanding as the ThinkPad X1, the HP EliteBook x360 830 G6 is nevertheless an excellent all-rounder that offers all the functionality and polish an enterprise needs. While technically a convertible, it’s as a laptop that the x360 really excels and, despite a few drawbacks, it’s one of the smartest devices we’ve seen this year. 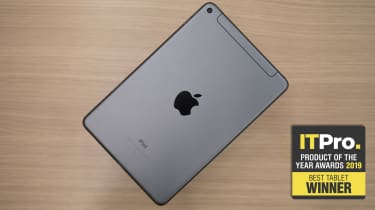 Apple has so thoroughly dominated the tablet computing space that for many people, ‘iPad’ is synonymous with the category as a whole, and the iPad mini is one of the most impressive of the lot. The latest edition is the first update to the range in almost four years, but it’s retained all the qualities that made us love the mini in the first place.

It’s more powerful than the MacBook Air, and the arrival of iPadOS’ productivity-boosting features has made it a genuine option for business users. On top of that, it’s also got support for the Apple Pencil - and all of this goodness is packed into a device that can still conceivably fit into a pocket.

Samsung is one of the few manufacturers still flying the flag for premium tablets, most of the other rivals having since ceded the fight to the iPad. It’s gratifying, then, that the Galaxy Tab S6 is an exemplary Android tablet, including a bundled stylus, great battery life and an impressive desktop-style UI in the form of Samsung DeX. 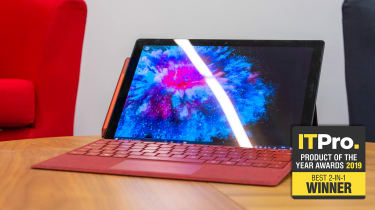 We have our qualms with Microsoft’s latest Surface Pro - the Core i5 model’s performance leaves something to be desired, and the battery life is less than we were hoping for - but despite these drawbacks, the Surface Pro 7 is still the zenith of the 2-in-1 form factor. It’s portable, versatile, and it’s still more than capable of handling everything up to proper media rendering tasks.

The Surface Pro’s design is near-perfect, and it truly comes into its own with the addition of USB-C, allowing you to flit seamlessly from a desk-based monitor, mouse and keyboard setup to on-the-go notetaking with the Surface Pen. Combine that with the smart improvements Microsoft has been making to Windows 10 and you’re got the ideal multi-purpose machine.

The Dell Latitude 7400 2-in-1 is aimed squarely at business users, but that doesn’t mean it has to be clunky or unattractive. On the contrary, it’s one of the more appealing convertibles we’ve tested this year - albeit in a professional, businesslike sort of way. Aside from the nice design and the smooth hinge action, it’s also a really well-rounded machine, making it perfect for mass deployments. 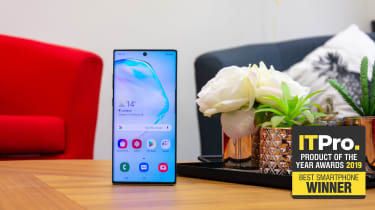 The Galaxy S10 may be Samsung’s more mainstream device, but don’t be fooled - the ‘prosumer’ Note 10+ is where the real action’s at. With a screen measuring almost 7in and a weight of just under 200g, it’s a bit of a behemoth, but that size is concealing some of the most powerful components Samsung has ever put into a smartphone.

As with the Tab S6, DeX is a standout feature that really elevates the Note 10+, and for the truly hyper-productive, the S-Pen is still the pinnacle of mobile note-taking. Aside from this barrage of productivity-friendly features, the Note 10+ also has one of the best cameras available on a top-end flagship device.

The Pixel 3a is the poster-child for doing more with less. Despite on paper being a less-sophisticated device than the Pixel 3, it takes all of the things we love about Google’s handsets and - thanks to its lower-powered processor - fixes its biggest issue by improving the battery life. In fact, for our money, it’s still a better bet than its successor, the Pixel 4. 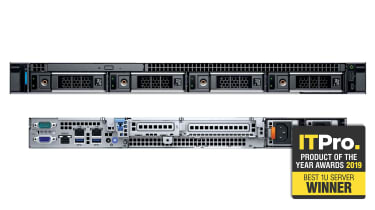 Dell EMC’s PowerEdge R340 might be among the most affordable of its servers, but don’t mistake it for a budget model; this pint-sized beauty is highly scalable, thanks to its support for up to eight SFF hot-swap bays, 12Gb/sec SAS speeds and a meaty quad-core Xeon E-2134.

Big things come in small packages, so the saying goes, and rack servers don’t get much smaller than the 1U HPE ProLiant DL20 Gen10, which is just 41cm deep. Despite its small proportions, it still offers a wealth of storage options and plenty of power, making it an excellent choice for space-conscious organisations - although it’s not quite as scalable as the R340. 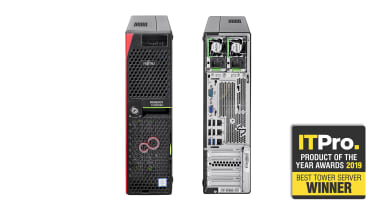 Like HPE’s DL20, the Fujitsu TX1320 M4 is a dinky little machine standing just over 40cm tall, but it’s managed to cram a lot of functionality into its slim frame. Not an inch of space is wasted, and there’s a surprisingly fulsome selection of configurations to choose from, including ten Xeon E-2100 CPUs and up to eight hotplug SFF drive bays.

It’s highly configurable and has great expansion potential, which makes it a great fit for businesses that want a server that can grow along with their needs. It even includes Fujitsu’s free ServerView Suite management tool - although SMBs may be better off sticking to the simpler System Monitor utility instead.

A bit of a beast in comparison to the TX1320, this squat, black monolith is nonetheless a capable alternative for businesses with modest infrastructure needs that don’t want to splash out on a full server cabinet. Like the Fujitsu, it features a Xeon E-2100 and a range of storage options, in addition to a range of storage options - although the fact that storage isn’t included as standard lessens its appeal a little. 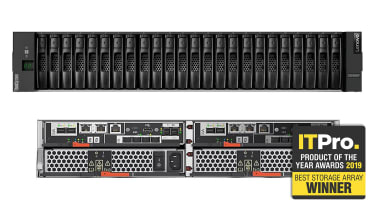 This appliance is the result of a partnership between Lenovo and NetApp, and it marks the company’s first serious foray into the enterprise storage market. As an entry-level all-Flash array with an affordable price, it’s the kind of product that should give industry mainstays like HPE and Dell EMC pause for thought.

Overall performance is excellent, with FC SAN speeds a particular highlight, and there’s an embarrassment of port options for the host interface. Showcasing the best aspects of both Lenovo and NetApp, this appliance is perfect for mid-level enterprises.

StorageCraft has built the OneXafe 4417 primarily with data protection and resiliency in mind, and it’s a perfect match for these kinds of tasks thanks to a heap of clever features. Expanding the size of your estate is simple too, with remarkably quick and easy deployment. It’s the ideal one-stop-shop for backup and disaster recovery. 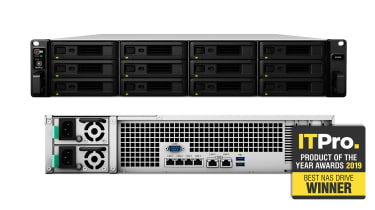 Marking the first of Synology’s new ‘SA’ appliances, the SA3400 is a firmly enterprise-class NAS unit that introduces both SAS3 and SATA storage. That’s in combination with a powerful eight-core Xeon-D processor and a maximum memory capacity of 128GB, which offers a pleasing amount of expandability.

It’s good value based on the price tag, but where this appliance really excels is in its performance, with blazing 10GbE speeds of more than 9.3Gbits/sec. Combine that with Synology’s well-rounded library of apps and you have an outstanding NAS that suits a range of uses.

This 1U NAS product may not look as imposing as some of its rivals, but what it lacks in size it makes up for in versatility. It’s well-suited to running private clouds and containers, and its smart internal design makes it easy to mix and match your drives. Its biggest flaw is that it’s not quite as affordable as we may have liked. 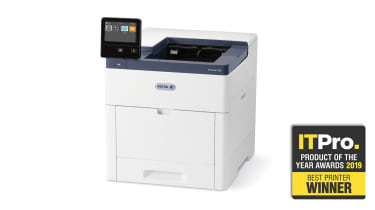 The main strength of Xerox’s VersaLink C500DN lies in its ConnectKey app platform, which lets users access a range of print-related apps, services and functions from its 5in colour touchscreen. Not only does that include a wide range of mobile and cloud printing tools, but it also includes things like automatic translation services - although this is only an option on models with a built-in scanner.

Even without the smart app gallery though, the C500DN is still an outstanding printer thanks to its lightning-fast speeds and fantastic output quality, combined with strong security measures to prevent misuse. Ideal for medium to large enterprises, this machine is a true workhorse.

The low price of the Kyocera Ecosys P6235cdn’s consumables, combined with high-capacity bundled cartridges, make this printer fabulously cheap to run. Not only that, but quality and speeds are both great. If you want wireless printing, however, you’ll need to invest £250 in an adapter card, which is a little steep for our tastes.