Mac Pro a "masterclass in repairability" 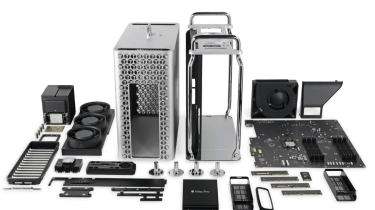 The new Apple Mac Pro 2019 has been declared a "masterclass in repairability" by the gurus at iFixit, who write manuals and test products for how easy it is to replace components for DIY repairs.

Apple hasn't always faired well. The MacBook Pro 2019 scored a meagre one out of ten, in part because components are soldered or glued into place. The iPad 7 been scored two out of ten for repairability, while the iPhone 11 was awarded a six out of ten — which iFixit said was "as good as it gets for a non-Fairphone". However, the Mac Pro has always been more modular, with the circular 2013 model scoring an eight out of ten.

The new model is more of a standard tower desktop computer, and was awarded a nine out of ten, making it the easiest to repair Apple product in recent memory, iFixit says.

Thanks to its modular design, the new Mac Pro was easy to disassemble with basic tools or even by hand, most parts easy to replace, and standard screws are used rather than proprietary ones. "The new Mac Pro is a Fixmas miracle: beautiful, amazingly well put together, and a masterclass in repairability," the iFixit team write. "We love that a good portion of the modules can be swapped without tools; we love the use of (mostly) standard screws and connectors; we love the step numbers and diagrams for certain repairs right on the device; and most of all, we love the free public repair manuals and videos."

However, there are a few aspects of the computer that can't be easily replaced. That includes a proprietary SSD, which has a security chip built in, though the iFixit crew note it's simple to add storage in other ways.

The iFixit team also report that while the grill on the side of the Mac Pro looks like a grater, it does not grate cheese very well, but the cheddar was easy to remove, at least.

The ease of repairing devices has caught the eye of regulators of late, not only because of the growing pile of e-waste, but following complaints that technology is becoming increasingly difficult to repair.

That's in part thanks to slimmer devices being glued together or using proprietary screws, but some companies banning customers from fiddling with their own phones or devices by requiring them to seek professional help or risk losing warranty coverage.

"With 2019 in our rear view, we’re starting to wonder: maybe Microsoft and Apple aren’t making devices more repairable just for fun (or for us) — maybe those Right to Repair bills are starting to look seriously scary," wrote iFixit.