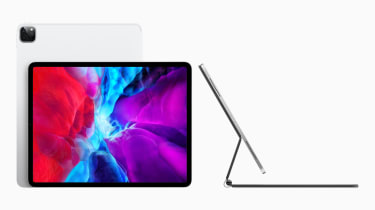 Whereas the ‘Pro’ suffix in the iPhone 11 Pro might seem more of a branding exercise, rather than the phone containing features specifically for business users, with 2018’s redesigned iPad Pro, Apple really seemed to be aiming its tablet at professionals.

The 11in and 12.9in iPad Pro models prompted conversations as to whether they could replace a traditional laptop for various professional workers. Most of these experiments concluded in a resounding ‘not quite’.

Previously, a lack of proper trackpad support and iOS not being particularly suitable for professional-grade productivity meant that the professional’s choice for hybrid tablet-come-laptop-alternative often landed squarely with Microsoft Surface Pro.

However, that might change with the 2020 iPad Pro models.

Aside from the new rear camera module, the overall look and dimensions of the 2020 iPad Pro are pretty much indistinguishable from its 2019 predecessor.

But it comes with updated internals - notably the A12Z Bionic chipset, an evolution of the A12 Bionic SOC which proved to be a bit of a world-beater as far as mobile chips go.  It also now has a LIDAR scanner to deliver improved augmented reality experiences, which could be a boon for iOS app developers looking to embrace AR.

But for the potential business user, the most significant update is the addition of the new Magic Keyboard cover. Keyboards for iPad are nothing new, but one with official trackpad support is, and the new accessory is reminiscent of the Surface Pro’s Type Cover, albeit costing a wallet-stretching £299.

Between this and the more professional and macOS-like features added by iPadOS, the 2020 iPad Pro is shaping up to be a hybrid device that can handle both work and play with aplomb.

That’s not to say it will prompt workers to abandon their laptops en-masse, but it might end up being a go-to secondary device for people who do a lot of remote and field working and want something lightweight yet flexible to carry around.

Laptops might be getting ever slimmer and lighter, but when it comes to easily presenting visual data or quickly jotting down digital notes when wandering across a showroom floor, for example, laptops drop a baton that tablets can easily pick up. So when looking for a device that spans the two form-factors, the new iPad Pro models look promising.

Admittedly, with prices starting at £769 for the tablet alone, the iPad Pros are far from cheap secondary devices to buy on a whim. But they do suggest that the iPad has finally cleared the last hurdles to being a truly enterprise-grade device.

All that being said, there’s also an argument that Apple hasn’t done enough with the new iPad Pro. Compared to Microsoft’s upcoming Surface Neo - a dual-screened device with a slick keyboard accessory and the ability to bounce between various forms - the iPad Pro looks a little bit behind the curve.

Of course, some professionals are likely to turn their noses up at hybrid devices full stop. In that case, Apple has just upgraded the MacBook Air, offering quad-core processors and the new Magic Keyboard mechanism, which looks set to address the shortcomings flagged in the previous model.

Whatever the future of computing might look like, for the time being traditional computers and hybrid devices will keep sharing the same professional pool.