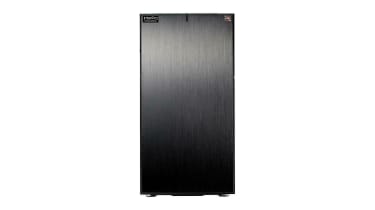 We normally expect InterPro to supply systems in both categories for our workstation roundups, but this time the company chose just to contest the lower price band. However, since the IPW-R9 sports the 16-core AMD Ryzen 9 3950X, it’s still got some major grunt available.

The 3950X only offers a dual-channel memory controller, but manages to outperform the Threadripper 1950X and 2950X CPUs that were AMD’s previous 16-core offerings. InterPro has supplied 3,600MHz-capable DDR DIMMs to take advantage of the Ryzen 9’s support for 3,200MHz memory, although only two 16GB modules are supplied for a 32GB total, while Scan provided 64GB in this price category. It’s no surprise to see Nvidia Quadro RTX 4000 graphics in place for this price, offering 2,304 CUDA cores.

However, we were a little surprised by the use of a Samsung 970 Evo Plus SSD for main storage. With a 1TB capacity it’s large enough and uses the NVMe M.2 interface, but this is only a PCI Express 3 model, so supplied sustained reading of 3,571MB/sec and writing of 3,341MB/sec. This is very quick, but it’s missing the even greater performance opportunity of PCI Express 4 NVMe drives. Yet InterPro has also included a very generous 6TB Western Digital Ultrastar DC HC310 conventional 7,200rpm SATA hard disk, which is also the fastest hard disk this month with sustained reading of 262MB/sec and writing of 256MB/sec.

Like Scan, InterPro opts for the excellent Fractal Design Define R6 chassis, which provides USB-C connectivity on its front ports. There is room for a second 3.5in hard disk, but the 5.25in drive at the front can’t be used because the watercooling radiator obstructs this area. Also, unlike the motherboard used by Scan’s Ryzen 9 system, the InterPro’s Asus Pro WS X570-ACE only offers a pair of conventional Gigabit Ethernet LAN ports rather than 2.5Gbit.

The InterPro proved the fastest Ryzen 9 system in our benchmarks, with an overall score of 537. It was also the quickest in this class to complete the Adobe Media Encoder CC 2020 video encoding job. However, its Cinebench R20 score of 9,373 and Blender Gooseberry CPU render time of 615 seconds were behind the Chillblast Ryzen 9 system. Modelling abilities were as capable as we’d expect from a Quadro RTX 4000.

Overall, this is a powerful workstation for the money with plenty of fast secondary hard disk capacity. It’s just a slight shame about the choice of SSD.