Supreme for GPU rendering, but this system’s 18 Intel cores can’t keep up with the 32-core AMD alternatives 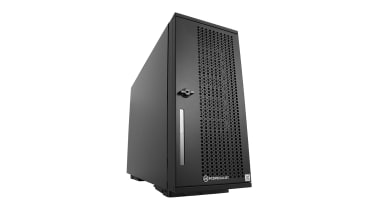 As well as being one of PC Specialist’s more expensive systems, this machine is also the most unusual entry in this roundup. Not only is it using an Intel processor, but it also comes with a gobsmacking four graphics cards. This makes it a very good workstation for one particular task, but also means it’s much less well rounded than other workstations in this price bracket.

A year ago, PC Specialist’s choice of an Intel Core i9-10980XE (had it been available then) would have been quite valid, as this 18-core processor would still have stacked up well against even the 32-core AMD Ryzen Threadripper 2990WX. This year is a different matter. Even though the 10980XE has a Turbo Boost frequency of 4.8GHz, and the non-overclocked maximum for all cores is 3.8GHz, it can’t provide serious competition to a Threadripper capable of running 32 cores at this frequency or higher. Our only caveat is that PC Specialist supplies the Core i9 running at stock speeds and there’s considerable room for overclocking.

It partners the Core i9 with 64GB of DDR4 SDRAM, but note that some rivals supply twice as much at this price. The RAM is provided as four 16GB modules, leaving four DIMM slots free, but here again, Intel lags behind AMD because the platform only supports 2,933MHz memory where AMD’s latest Ryzens hit 3,200MHz natively.

The graphics card specification is the most unusual part of the setup. Not only have four of them been supplied, but they are all consumer-oriented PNY Nvidia GeForce RTX 2080 Ti Blower models. These are hugely powerful cards, with 4,352 CUDA cores each and 11GB of GDDR6 memory providing a whopping 616GB/sec of bandwidth. This won’t make modelling any smoother, but should blow away any GPU rendering tasks. Although the PC Specialist’s AS WS X299 SAGE/10G motherboard has seven PCI Express x16 slots and only four graphics cards, the fact that they are all double-width means that no slots are free.

Storage is another area of differentiation. Instead of using a M.2-based NVMe SSD, this system calls upon the motherboard’s U.2 connection for a 2.5in Samsung PM883 enterprise-grade SSD. This still operates via the PCI Express 3 x4 protocol, however, so it should be just as fast. It’s still no match for PCI Express 4 drives, though, with sustained 3,485MB/sec reading and 1,583MB/sec writing. More unusual is the quartet of 4TB Seagate IronWolf Pro 7,200rpm hard disks, which PC Specialist has configured as RAID5 – a mode that provides both redundancy and performance enhancement. So you only get 12TB of the 16TB capacity, but the sustained read and write speeds are SSD-like with 707MB/sec and 616MB/sec respectively. 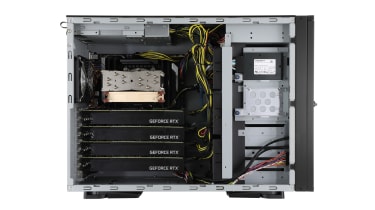 The hard disks take advantage of the industrial-strength Inwin IW-PLG chassis, which sports eight front-mounted 3.5in hot-swap drive bays, and there’s an additional 2.5in bay internally as well. However, with all the graphics cards and an air cooler, this is a noisy system at full pelt.

How far Intel has been left behind by AMD was immediately obvious in our benchmarks, where the Onyx’s overall score of 486 fell behind even the Ryzen 9 3950X systems this month. Its Cinebench R20 result of 8,843 was also slower, and this was mirrored in the IndigoBench 4 CPU tests and the Blender Gooseberry CPU render, which took 690 seconds. The Adobe Media Encoder CC 2020 video encode was one second faster than the slowest Ryzen 9 in this test, and way behind everything else bar the other Intel system.

However, the LuxMark 3.1 score of 37,070 shows just how much GPU compute power is on hand, which is further underlined by the GPU scores in IndigoBench 4. Taking just 144 seconds to complete the GPU Blender Gooseberry render, less than half any other system, makes this system’s strong area clear. However, whilst the consumer-grade graphics show decent scores for 3dsmax-06 and maya-05 in SPECviewperf 13, CAD viewsets such as catia-05 and sw-04 are not as impressive, and snx-03 is woeful. Do not use this system for design work with Siemens NX.

Ultimately, the PC Specialist Onyx 994RG is a master of one trade – GPU rendering – but its Intel CPU lags behind the 32-core AMD Threadrippers in every other respect.