6 things to look for in a workstation 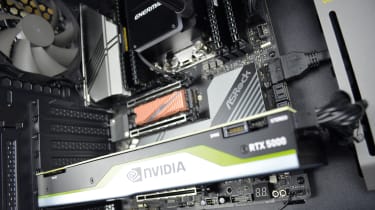 A workstation aimed at content creation and other high-end 3D-focused activities is the pinnacle of PC performance. It warrants the very best components at every level – a fast CPU with as many cores as possible, lots of RAM, high-end professional graphics and speedy, capacious storage. But few buyers can afford the best possible components in every category, so here are the main six features you should consider when specifying your perfect workstation.

There used to be a clear divide between workstations offering fewer cores but a faster frequency versus more cores with a lower clock speed. Now, however, you can have your cake and eat it. Almost. There’s still a few hundred MHz difference between the top Turbo modes of processors with more than 16 cores and those with this number or fewer. But if you’ve got the money, you can opt for the AMD Ryzen Threadripper 3970X, which has a 4.5GHz Turbo mode and 32 cores that run at 3.7GHz or above. So this CPU will give you supreme rendering with little compromise on single-threaded performance.

That said, if you can’t quite afford this 32-core monster, you can still enjoy at least 16 cores. Again, AMD is at the forefront. Thanks to the company’s 7nm chipset design, the Ryzen 9 can pack in more cores than Intel for the same money. The fact that so few manufacturers actually use Intel processors in their machines illustrates how far AMD has come. The Ryzen 9 3950X will give you 16 cores for the same sort of money that Intel will charge for eight, ten or possibly 12 cores at a pinch. And although Intel still has a slight advantage with single-core frequency, the difference is now almost negligible.

So, rather than choosing fewer cores but a faster clock for modelling-type activities, and more cores for rendering, the main question now is how many cores you can afford. You’ll probably be choosing between an AMD Ryzen 9 or Threadripper.

While you could still get away with 16GB of memory in a gaming rig, professional work demands as much RAM as you can afford. A 32GB allocation is a bare minimum, and we’re starting to see quite a few systems with 64GB. When you’re dealing with large 3D models, or editing high-resolution photos and 4K video, having lots of memory really helps. More of the content you’re working on can be held in main RAM so your workflow will be faster. With a system sporting lots of cores, a large amount of RAM means you can have more tasks operating at once – such as a background render whilst you carry on with design work.

Both Intel and AMD processors support dual-channel memory at the consumer end of the market. But, while the memory controller on Intel processors is officially limited to 2,666MHz DDR4, AMD’s latest Ryzens support 3,200MHz, meaning you’ll be able to benefit from faster bandwidth. The higher-end enthusiast and workstation Core i9 10000 series do support quad-channel memory, at up to 2,933MHz. However, AMD’s Ryzen Threadrippers also support quad-channel memory configurations, and the latest versions can run memory officially up to 3,200MHz. So here, again, you get a boost in RAM bandwidth with the AMD option.

Although AMD does now have a credible Radeon Pro option at the sub-£1,000 end of the market, most 3D professionals will still choose a graphics card from Nvidia. The official advice is to go for one from the professional range – so a Quadro. Yet, although this guarantees support for any problems you might have with your professional content creation software, some content creators consider the extra expense to be a waste of money.

Games designers in particular tend to favour consumer-grade Nvidia GeForce cards, which makes sense if they want to test their game code on the same workstation they’re using to create it. Two of the most popular 3D animation applications – 3ds Max and Maya – run well on GeForce. Also, if your applications use GPU rendering, you get a lot more CUDA or OpenCL for your money with a GeForce or Radeon. However, CAD applications tend to struggle with GeForce drivers, particularly Siemens NX, a popular piece of product design software. If you’re using this, we’d definitely recommend a Quadro or Radeon Pro.

If you want to be sure of compatibility across a range of software, a Quadro is still the way to go. The RTX 4000 will handle pretty much any application, with 2,304 CUDA cores and 8GB of GDDR6 memory offering 416GB/sec of frame buffer bandwidth. For more demanding 3D work, the RTX 5000 ups the CUDA cores to 3,072 and runs them at a higher frequency, whilst doubling the GDDR6 allocation to 16GB and increasing the bandwidth to 448GB/sec. The RTX 6000 is for particularly specialised applications but is in a league of its own, with 4,608 CUDA cores (twice as many as the RTX 4000) and a 24GB GDDR6 frame buffer on a wider 384-bit bus, so boasts 672GB/sec of bandwidth. But it’s hugely expensive and only worth the outlay if you really need the very best graphics performance.

Yet another new feature introduced by the latest AMD CPU generation is support for PCI Express 4, and the first area where you’ll see the benefit in workstations is with storage. Both the Ryzen 9 and Ryzen Threadripper 3000 series support PCI Express 4 NVMe SSDs, so make sure any system you purchase with either processor has at least its main OS and application storage device in this format. The sustained throughput will be 30% to 40% higher than the PCI Express 3 NVMe storage that’s the fastest possible for Intel systems.

However, the choices for PCI Express 4 NVMe drives are still quite limited, as well as expensive. That means you’re likely to want to add a cheaper high-capacity unit on top. Despite all the talk of SSDs replacing hard disks for over a decade, the mechanical hard disk remains the most cost-effective choice. While a 4TB SSD will set you back around £500, the same capacity hard disk is £100 to £150. Even conceding the fact that their throughput is less than half and access times far slower, hard disks remain cost-effective for storing large files such as 4K video.

Workstations tend to be huge black behemoths because they’re meant for very serious activities. But size is of real value for this kind of computer. Two key areas to look for are the ability to fit high-end triple-radiator watercooling, and plenty of room for drive upgrades. You can’t really have either of those in a compact case. The AMD Ryzen Threadripper’s Precision Boost Overdrive feature dynamically monitors your cooling and tailors core frequencies accordingly, so having strong watercooling will mean faster performance. Tool-free features are also useful in a chassis, particularly for secondary drives. You might well find that you need to add more storage to cope with additional media assets, – so being able to slip this in without too much case deconstruction is a big plus.

One of the most likely causes of PC instability is an underspecified power supply. Consequently, for a workstation it’s always best to err on the side of caution and overspecify here. For a 16-core workstation, 650W is a bare minimum, and we’d recommend 750W or more. For a 32-core system, we suggest 850W or higher. An 80 Plus Gold efficiency rating or better will also mean the vast majority of the watts that are fed in will end up being used by your components, rather than wasted.

As you read through the following contenders, it’s worth noting that they almost all conform to these guidelines closely.