Zotac’s PC is affordable and fine for daily computing, but it’s hampered by restrictions 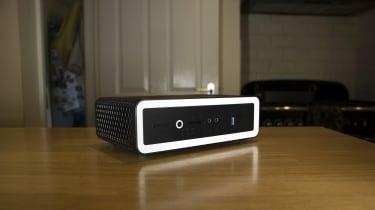 The Zotac ZBOX VA621 Nano is one of the smallest desktops around, which makes it tempting for all sorts of situations – compact desks, cramped offices and even for people who need to take their PC with them while they’re hot-desking or moving between locations.

The price of £229 exc VAT is low, too, although bear in mind that this is a barebones machine, so you’ll have to provide your own memory and storage – and your own copy of Windows.

The Zotac looks smart, with a smart white ring around its front panel and black metal and plastic elsewhere. The power button shares the white ring, and the front looks slicker thanks to its rounded corners – there are no ugly, sharp edges. The top and sides of the machine are made from one piece of metal, and it’s covered with hexagonal cut-outs to aid passive cooling.

The ZBOX will look inconspicuous on any desk, and its tiny dimensions make this machine more versatile. It’s only 204mm wide and 68mm tall, so it’ll fit almost anywhere, and a 1.1kg weight makes it easy to transport.

The only external issue concerns build quality. The exterior panels do have a little more movement than we’d like. They’re not dangerously weak, and the Zotac should survive frequent trips in a backpack, but it could be stronger. 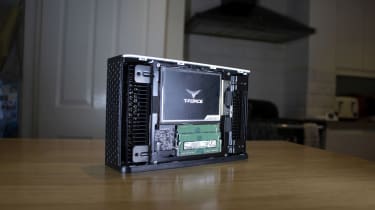 The ZBOX sits on four rubber feet, and removing these allows access to the internals. Beneath the base panel there are two SO-DIMM slots, an M.2 connector and a SATA port with room for a 2.5in drive.

Zotac’s machine does have competition when it comes to compact computing. The QuietPC UltraNUC Pro 7 Fanless is a full system, and it costs £570 exc VAT for the specification we reviewed. Impressively, its dimensions almost match the Zotac.

The Lenovo ThinkCentre M910x Tiny has been replaced by the M920 model, but it retains the same case design – including a tiny 36mm thickness. Like the QuietPC, it’s a full system rather than a barebone machine. For a specification that’s comparable to the Lenovo we reviewed, it costs £600 exc VAT. Both of these rival machines are sturdier than the Zotac, but both are heavier, too.

Zotac’s tiny machine is powered by an AMD Ryzen 3 3200U processor. It’s a modest chip, which is unsurprising given this PC’s price and passive cooling. It’s a dual-core part with multi-threading, and it runs with base and boost clocks of 2.6GHz and 3.5GHz. It’s technically a mobile chip, so the low-end specification makes sense. 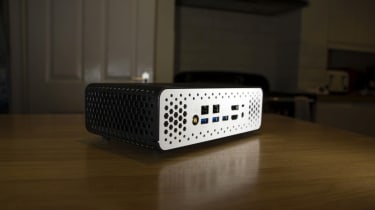 The Ryzen 3 3200U includes a Radeon RX Vega 3 graphics core which, again, is a low-end part – it only has 192 stream processors and a peak clock speed of 1,200MHz. The other key components must be provided by the user. The Nano has two SO-DIMM slots that support 32GB of 2,400MHz DDDR4 memory, and storage is covered by the SATA and M.2 connectors.

The cheapest options for new parts would be a single stick of 4GB memory and a 2.5in hard disk. Adding those components will cost less than £50, but to get the most out of this PC, we’d recommend dual-channel memory and a 2.5in SSD. To get decent hardware, you won’t have to spend loads – no more than £150. And, no matter what you install, you’ll have to include the cost of an OS if you want to use Windows.

The QuietPC used an aging Intel Core i3-7100U CPU, which is a dual-core mobile chip with a similar specification to the Zotac’s AMD silicon. The QuietPC also had 8GB of RAM and a 256GB M.2 NVMe SSD and it now costs £570 exc VAT. The cheapest ThinkCentre M920 costs £600 exc VAT and uses a six-core i5-9500T, 8GB of RAM and a 256GB SATA SSD – the nearest equivalent to the older rig we reviewed.

We used 16GB of 2,400MHz memory and a 250GB SATA SSD when testing the Zotac. The memory is a solid amount for everyday work, and the SSD delivered read and write speeds of 540MB/s and 306MB/s – the sort of pace you’d expect to get from a mainstream SATA drive.

The Zotac machine scored 45 in our application tests. That’s a mediocre result: the Core i3 chip in the QuietPC could only score 37, but the older Lenovo machine scored 100 – and its current iteration will be faster.

The Zotac’s integrated Vega 3 GPU scored 5,089 points in the low-end 3D Mark Sky Diver benchmark. That’s just over 1,000 points ahead of the HD Graphics 620 chip included with the QuietPC’s Core i3 CPU, but it’s a similar distance behind the UHD Graphics 630 core used in more recent chips – including the ThinkCentre. 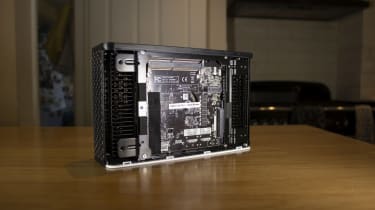 The Ryzen 3 chip has enough power to handle web-browsing, mainstream Office apps and other entry-level work tools, but that’s it. It’s going to struggle if you run several apps or lots of browser windows, and its GPU can handle Windows and basic media playback – but no photo-editing, and no after-hours gaming. It doesn’t feel particularly snappy, either; loading times are often irritating. It’s still better than the QuietPC, but the Lenovo is far more powerful, with more multi-tasking grunt and better loading times throughout.

The Zotac’s rivals are arguably more versatile when it comes to hardware. The QuietPC can be configured with different processors, and it’s available with faster NVMe SSDs. The Lenovo, meanwhile, is available with more powerful Core i7 and Core i9 CPUs, albeit at higher prices.

At least the Zotac is an impressive thermal performer: its passive cooling means that it’s silent, and aside from a little hot air pumped from the top of the machine there are no temperature problems.

Zotac’s machine has two Gigabit Ethernet ports, which neither rival offers, and it has dual-band 802.11ac wireless – but no WiFi 6. The front of the machine has one USB 3.0 port, and there are three more at the rear. The front panel also has an SD card reader and two audio jacks, and the rear serves up HDMI and DisplayPort outputs.

The QuietPC and Lenovo machines both offer more USB ports and more USB 3.1 ports with faster data transfers, though. All of the machines here have a Kensington lock slot, but none of them have Thunderbolt.

On the inside, the Zotac has AMD PSP 10.0 and TPM 2.0, and the BIOS includes password-protection features, plenty of USB connectivity options and secure boot settings. The Lenovo is similar here, albeit with the addition of Intel vPro. The QuietPC doesn’t have TPM.

Zotac’s barebone system is tiny, with decent looks and reasonable connectivity. Combine this with a CPU that has the power to handle entry-level office tasks and you’ve got a capable machine that won’t take up much space.

As ever, though, this barebone system needs memory, storage and an OS, so it’s going to incur costs unless you’ve got components lying around. The Zotac has limitations, too: its internals aren’t powerful enough to go beyond entry-level apps, and the tiny interior is restrictive.

The Zotac is cheaper than its fully-specced rivals, even when the extra cost of components is factored in – but those machines offer more versatility and, often, more power. The CA621 is a decent, affordable barebone PC, but it’s not particularly ambitious.