The Thunderbolt connection via USB-C

Intel has revealed the specifications for its new Thunderbolt 4 interface, which promises to double the video output capacity of its predecessor while allowing the same maximum 40Gbps bandwidth over longer cables.

The universal standard – created by Intel a decade ago in collaboration with Apple – can support two 4K displays or one 8K display, as well as PCIe speeds doubling to 32Gbps. This is in addition full compliance with USB 4.

The hardware requirements for manufacturers to gain certification are also much steeper, with devices requiring charging on at least one port, and for machines to be able to wake from sleep when connected to a Thunderbolt dock. The Intel VT-d-based direct memory access (DMA) hardware protection is also required on certified machines.

With Apple moving away from including Intel CPU chips in future Macbook editions, there were concerns over the future of Thunderbolt in its upcoming ARM-based devices. However, Apple has assuaged fears by confirming that it would continue to support the connection standard in its hardware.

“We expect Thunderbolt 4 products to be an inflection point for accessory makers who depend on PCs and Macs to offer an industry-leading set of product capabilities for a consistent user experience,” said VP and GM at Kensington, Ben Thacker, commenting on the announcement. 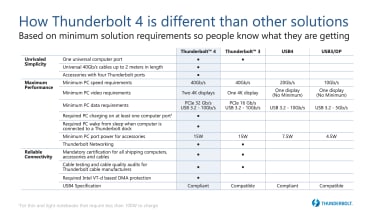 Additional benefits, beyond delivering power, video and data through a single port, include being able to support 40Gb/s cables of up to two metres in length, as well as allowing docks to be built with four Thunderbolt 4 ports. Currently, Thunderbolt 3 supports up to 2 metre cables but only at a halved 20Gbps bandwidth.

Delivered through USB-C ports, devices with support for these connections will retain the lightning logo, while cables will also feature a small number ‘4’. The lack of a ‘4’ denotation on hardware, however, may lead to confusion as businesses and consumers seek to purchase devices with Thunderbolt 4 support.

The first set of devices with Thunderbolt 4 support are expected to be released later this year and will be fitted with Intel’s Tiger Lake processors, set to be included in machines made under the Project Athena banner.