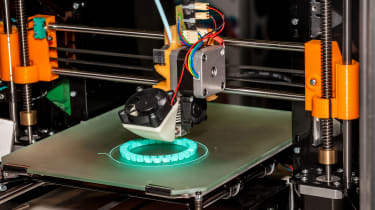 Azul 3D unveiled its new 3D printing technique last fall when it announced a 13-foot-tall printer that boasted a 2.5-square-foot print bed capable of printing about half a yard in an hour. Ever since the announcement, the company has continued picking up steam.

Amid the coronavirus pandemic, Azul 3D has used its HARP technology to produce medical face shields at a record rate of 1,000 components per printer in a 12-hour shift. The company plans to accelerate its beta printers to print 20,000 shields per week within the next few months.

“One of the reasons we’re doing so well is because our technology offers a solution to unexpected surges in demand and supply-chain bottlenecks that occur during global crises, such as in the current pandemic,” said David Walker, Azul 3D co-founder and chief technology officer.

“With the ability to manufacture nearly anything quickly and on demand, we can meet these unexpected needs as they arise to quickly fill gaps in the supply chain,” Walker continued.

Invented and developed at Northwestern University, HARP enables users to print 3D structures from various materials. The company says its HARP printers can manufacture parts at production speeds that outpace their competitors.