As rivals continue to make gains, the chipmaker may be past its best 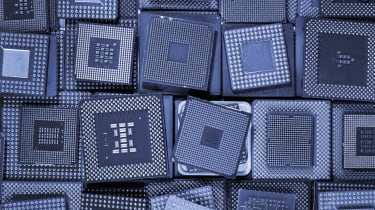 Looking at Intel’s most recent financial results, you’d be inclined to say the company is doing rather well; its first-quarter revenue for 2020 is up by almost 25% year-on-year, to a total of just under $20 billion, with strong double-digit growth across both its data centre and end-user computing divisions. The company forecasted a reduction in revenue for Q2, but it’s a comparatively minor one, and all things considered, the company appears to be in good shape.

So why do I have this persistent feeling that somehow, this is the beginning of the end for the silicon titan?

Perhaps it’s because Nvidia has just leapfrogged Moore’s company to become the most valuable US-based chip manufacturer, buoyed by smart acquisitions and a keen focus on the data centre; or maybe it’s the fact that it’s taken 12 years and counting for the company to bring its 10nm production process to market, in which time AMD has flamed out, reinvented itself and still had time to jump straight past Intel to a 7nm process, which has been widely available since last year.

It also could be the fact that I’ve spent the week testing out the Samsung Galaxy Book S – a marvellous little device built on Qualcomm’s Snapdragon 8cx platform which demonstrates the true capabilities of ARM-based Windows devices when properly engineered. I won’t spoil the review (which should be published soon) but, suffice it to say, the power efficiency leaves Intel devices in the dust.

This, I think, illustrates the root of the problem that I’ve been having with Intel; the company isn’t innovating fast enough. Each successive generation of Intel chips manages, at most, around a 10-15% performance increase over its predecessor – meanwhile, AMD is producing monster 32-core desktop processors which can make entire server racks redundant, and Qualcomm’s laptop chips look like they could well start eating Intel’s lunch when it comes to price/performance ratio.

Historically, Intel has always had inertia on its side – it’s the industry’s biggest player, and has long-standing commercial relationships with every vendor in the industry. This has allowed the company to keep a strong grip on the top spot, and even today, Intel chips are effectively the default for most hardware.

So what’s the problem? Intel is still the dominant market force, with a huge lead in market share and a very healthy financial outlook, so what’s there to worry about?

Well, being the incumbent will only get you so far in the face of genuine competition. Already, we’re starting to see a noticeable uptick in the number of servers from blue-chip vendors like Dell and HPE that use AMD’s EPYC data centre chips rather than Intel Xeon processors. Ryzen-powered laptops are becoming more common too, and if the Galaxy Book S is anything to go by, expect the same to be true of Snapdragon laptops before too long.

One of the biggest warning-signs is that Apple, a long-time partner of Intel’s for all of its desktop and laptop compute hardware, has finally decided to abandon Intel chips in favour of custom-made ARM silicon. While other hardware manufacturers are unlikely to start manufacturing their own chips, Apple could be the first of many to decide that perhaps Intel is no longer the best partner.

In short, unless Intel pulls its finger out and starts actually innovating again, it’s going to get left behind by its rivals. Nvidia, AMD and Qualcomm are all making gains on the company, and it’s not doing an awful lot to justify its position as market leader from where I’m sitting. Intel’s been at the top of the heap for decades now – maybe it’s time for a change.