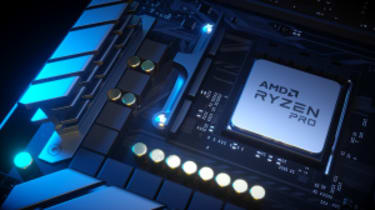 AMD has revealed a new suite of Ryzen 4000-series processors for business and consumer desktops including integrated Radeon graphics, with a view to challenging Intel’s dominance in the pre-built desktop market.

The new entries in the Ryzen family - codenamed ‘Renoir’ - are built on AMD’s Zen 2 architecture using its 7nm process, and will be compatible with the AM4 socket. The 4000-series are APUs (short for ‘Accelerated Processing Unit’) which is AMD’s term for processors combining a CPU with an on-chip GPU. These represent the first Zen 2 desktop APUs, following the launch of mobile Zen 2 APUs at this year’s CES.

AMD is touting big performance gains both over the previous generation of Ryzen APUs and over Intel’s equivalent 9th-gen components. An AMD spokesperson said that the company has not been able to benchmark the new chips against the latest 10th-gen Intel processors, but said that it still expects to see a noticeable difference in its favour versus 10th-gen.

The company is launching 24 new chips in total, split between its consumer and commercial Ryzen Pro product lines. Both commercial and consumer ranges feature Ryzen 7, Ryzen 5 and Ryzen 3 parts, with each category receiving two chips - one with a 65W TDP and one with a 35W TDP. Each range also gets three new Athlon chips for more entry-level systems.

AMD is claiming that the top-end Ryzen 7 Pro 4750G offers 31% faster performance than the competing Intel chip, as well as more than 50% better multi-threaded performance than its own previous-generation Ryzen 5 Pro 3400G processor, while the mid-range Ryzen 5 Pro 4650G is supposedly around 30% faster on average at operating the Microsoft Office suite. The chips will also support up to three independent displays.

“[The Ryzen 7 Pro 4750G can go] head-to-head against a Core i7-9700; frankly, [it’s] a competing point that we just have not had, historically, in our commercial desktop business,” said Matt Unangst, director of AMD’s commercial client business. “We’re excited to show that we deliver leadership capability at the top of the stack.”

In addition to performance improvements, the company is touting lower power consumption, greater thermal efficiency and near-silent operations, and has specifically optimised the chips for small-form-factor devices, citing OEMs’ growing demand for chips to fit low-profile and all-in-one devices.

Along with the TCO benefits offered by a lower power consumption, the professional range also includes a number of exclusive security-focused technologies, such as AMD Memory Guard, which offer full memory encryption, and AMD Pro Manageability, which gives IT admins more control over imaging and deployment and is fully compatible with Microsoft Endpoint Manager.

These chips will not be available for purchase directly; instead, they will be exclusively reserved for system builders and OEMs constructing pre-built desktops, although AMD has intimated that standalone desktop APUs for individual customers are also coming as part of its future roadmap.

AMD did not specify which manufacturers will be releasing desktop designs featuring the new chips, but did drop a few hints as to a few likely suspects.

“We have current-gen commercial desktops with both HP and Lenovo,” said Unangst. "We expect to refresh many of those platforms and continue to expand our portfolio going forward.”