The new, embiggened version of Microsoft’s ultraportable is slickly designed, but falls behind the 13.5in model in multiple metrics 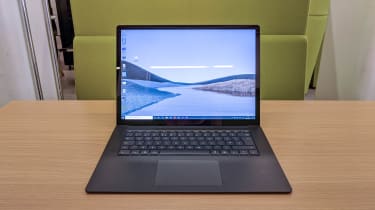 The launch of a larger Surface Laptop 3 should be cause for celebration - last year’s Surface Laptop 2 was a fine ultraportable, and the prospect of an updated successor with more screen space to work with was, initially, a very exciting one.

After some time with the Surface Laptop 3 15in, however, it’s hard not to come away disappointed. While succeeding and even excelling on core aspects like build quality and, yes, the display, Microsoft’s decision to fit all 15in configurations with an AMD Ryzen chip instead of sticking with the 13.5in Surface Laptop 3’s Intel Ice Lake CPUs proves to be a grave error.

First, here’s something that the bigger Surface Laptop 3 gets right. Outwardly, it is literally an upsized take on the 13.5in model, which means the same neatly angled shape and the same tough-but-classy magnesium alloy construction. You can choose between a plain metal finish or with hydrophobic Alcantara fabric around the keyboard; to our eyes, the former looks more grown-up, especially on the matte black version we were sent.

It measures a modest 339.5x244x14.7mm, so is only a hair thicker than the 13.5in model, and its 1.5kg weight is easily manageable. There’s a likeable straightforwardness to this design: it’s not overly flashy, but it is as handsome and portable as you’d want from a laptop this expensive.

The speakers are great too. In fact, they’re easily among the best laptop speakers of any we’ve used, which admittedly isn’t saying much - they’re still light on bass - but the relative thickness of the sound is instantly noticeable. As is the lack of sibilance when the volume is cranked up, which can be pushed to surprising heights. 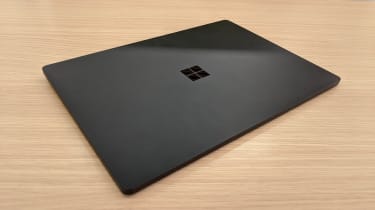 What’s more, because the sound is emitted from behind the keyboard, there’s no difference in sound depending on what surface the Surface is on. That should please anyone who’s muffled underside-mounted speakers with their legs.

Surface Laptops have always benefited from high-spec, touch-enabled displays, and the Surface Laptop 3 15in might well have the best one yet. It has the same, tall 3:2 aspect ratio as the rest of the family, but with a bit of extra height and width - so it’s better than ever for reading long documents or working with multiple windows. 2,496x1,664 is a weird-sounding resolution, but here it’s more than enough to keep everything looking pin-sharp.

Content producers will also be pleased with how well the screen performs on a more technical level. Peak brightness reaches a high 399cd/m2, and by covering 97.4% of the SRGB gamut, colours look handsomely rich. The highlight, though, is colour accuracy: we measured an average delta-E of just 0.66, low enough to qualify the Surface Laptop 3 for professional photo and video editing.

The only weakness is the reflectiveness of the screen’s glossy finish, but the high brightness helps keep things readable.

Despite upsizing, the keyboard and trackpad are exactly the same as on the 13.5in model. Again, that’s no real issue, because both are brilliant. Key sizing and spacing are perfectly judged, and the slight concave shape of the keycaps - a new addition for the 3rd generation - creates a more natural feel. Travel is on the shallow size but still sufficient, and the switch mechanisms are crisp and responsive.

The trackpad is smooth and fast, too. The lack of a size increase doesn’t matter as it’s already pretty spacious, and the diving board-style button switches have a pleasantly substantial feel to them. 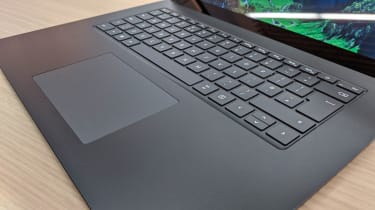 Of course, you can also use the touchscreen for inputs. It’s not as vital as it would be in a convertible, but it works well enough if you’re inclined.

The biggest internal difference between the 15in and 13.5in models is that while the latter all use 10th-gen Intel Ice Lake chips, all 15in variants are powered by AMD Ryzen processors. Our model, for instance, is built around the quad-core Ryzen 5 3580U - a Surface Laptop exclusive, no less. It’s backed up by 16GB of RAM, integrated Vega 9 graphics and a 256GB SSD, making it the second-highest spec available after the sole Ryzen 7 3780U option (£1,708 excluding VAT).

The Surface Laptop 3 15in also underwhelmed in GeekBench 4, scoring 3,934 in the single-core test and 11,386 in the multicore test. Again, its smaller, cheaper sibling performed better, scoring 5,517 and 18,492 respectively.

At least the NVMe SSD produced a decent 1,511MB/sec read speed in the AS SSD benchmark, although its 498MB/sec write speed is well below the NVMe platform’s capabilities.

We’ve repeatedly seen Ryzen-powered laptops suffer from shorter-than-expected battery life, and the Surface Laptop 3 15in is unfortunately another to add to the list. There are less enduring laptops, to be fair, but its 7hr 34mins result in our video rundown test is still something of a letdown. The 13.5in version managed 8h 10m, and although the XPS 15 only lasted 7h 15m, it had a much thirstier 4K screen to account for. 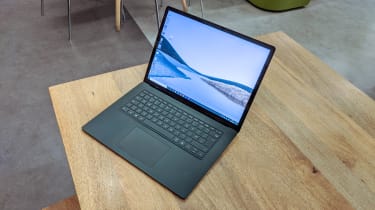 You might be able to squeak through a full shift without visiting the mains, but you’d need to lower the screen brightness and be frugal with wireless use.

Speaking of wireless, the Ryzen chip doesn’t just confer mediocre performance and suspect battery life: it also doesn’t support 802.11ax, also known as Wi-Fi 6, so you won’t be able to take advantage of the new standard’s faster speeds. Most galling of all is that the Intel chips within the 13.5in models do support 802.11ax, so you’d be literally paying more for less.

Conversely, there’s exact parity on physical ports: one full-size USB 3.1 port, one USB-C port and a headphone jack. This is hardly a generous bounty, but the inclusion of USB-C is one significant upgrade on the Surface Laptop 2: because it can carry video, data and power all at once, it’s a lot more versatile than the mini DisplayPort it replaces, even if it’s not full-fat Thunderbolt 3.

Features-wise, Windows 10 Pro provides all the usual security and IT management tools business users should be used to - Bitlocker encryption being a particular highlight - and although there’s no fingerprint sensor, you’re not without biometrics. The Windows Hello camera nestled in the top bezel makes for a quick and convenient alternative to passwords, via facial recognition.

The Surface Laptop 3 15in is often fantastic; it’s finely crafted and comfortable to use, and that screen is one of the best in its class. However, that also makes it hurt harder when it settles for less in the performance and connectivity departments.

On that note, much of what is good about the Surface Laptop 3 15in can be had in the 13.5in version for less money - and if it’s power you’re after, the XPS 15 remains a good choice even years after launch. That leaves the 15in model as a laptop that dabbles in greatness, but ultimately doesn’t make for a very compelling purchase.