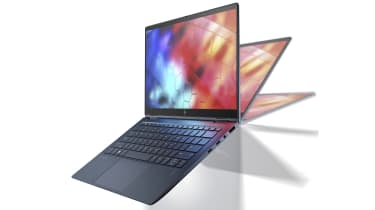 HP's Elite Dragonfly G2 is now the first laptop to come with built-in Tile trackers, letting the convertible business laptop be found via Bluetooth, the company has revealed.

Users can also opt to subscribe to Tile's premium service to get a notification if they leave the device behind, though that can already be achieved by attaching a Tile to your laptop.

However, the updated Elite Dragonfly has a few other headline features, including optional support for 5G, an update to its display technology called HP Sure View Reflect that prevents prying eyes from seeing your work from a side angle, and being partially made from sustainable materials. HP says that 82% of the mechanical parts are made from recycled sources, with a small part of the exterior from ocean-bound plastic – though given it's only 5% of the speaker enclosure, it's more of a step in the right direction than a green achievement worth crowing about.

Alongside those new features, the HP Elite Dragonfly G2 has had a few other internal upgrades from the first model, which only landed at the end of last year. The 2020 model of the two-in-one steps up to Intel's 10th Gen processors, from the 8th Gen used in last year's edition. The new model weighs in just under 1kg for certain configurations. HP is also offering optional storage up to 2TB.

As with the first model of the Elite Dragonfly, the updated models come with the same blue chassis, convertible design that flips between a laptop and a tablet, backlit keyboard that's designed to be ultra-quiet, a digital pen that will let you know if you leave it behind, and multifactor authentication for added security.

The HP Elite Dragonfly G2 will be available from February 2020, though the version with 5G and the updated processors won't arrive until the summer. Prices weren't immediately available, but the previous model started at £1,099.

HP also announced an updated version of its HP Spectre x360 15 with a 15.6in display, Nvidia GeForce graphics and a 10th Gen Intel i7 chip, as well as upgrades to the HP Envy 32 All-in-One, both starting at $1,599. UK prices weren't immediately available.