The newest XPS looks like a superior upgrade, if not a groundbreaking one 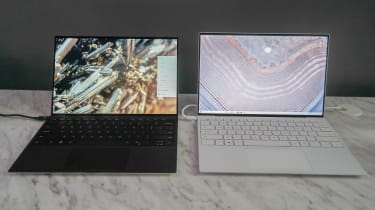 On-stage at Dell’s CES 2020 press conference, the company proudly announced that the Dell XPS 13 had won an award for the “best product of the decade”. It’s right to be proud, and we agree that the Dell XPS 13 is an outstanding laptop, but this comes with a painful corollary: how do you improve something that’s already so good?

The first thing you notice is how tiny this laptop has become. With each passing year Dell squeezes here, nips there and tucks somewhere else, and in 2020 the net result is a laptop that’s not only slim but also a few millimetres narrower from front to back.

It’s because the screen is squatter than before, shifting to a 16:10 aspect ratio that makes it easier to compare documents side by side. This hasn’t affected the keyboard’s quality; Dell even argues that it’s better, with an edge-to-edge design resulting in key tops that are 7% bigger than last year. The trackpad is both larger and quieter, too.

Dell has made the bezels narrower than ever, with the biggest change being at the bottom. This was chunky before, but now it’s just as slim as the rest of the bezels, giving the XPS 13 a clean look and, according to Dell, a 91.5% screen-to-body ratio.

The screen itself looks as good and bright (note the 500cd/m2 maximum) as ever, but this shouldn’t be a surprise. The XPS is Dell’s premium line, and that’s reflected in the quality of such important components. You have a choice of Full HD+ or Ultra HD+ resolutions, which means 1,920 x 1,200 or 3,200 x 2,400. We would lean to the Full HD+ choice as the screen still looks sharp.

A Full HD+ panel also means slightly better battery life. Dell “targets” 19 hours of battery life here, and while that’s going to be tough to hit in real use it means you should last a day of hard graft away from a power plug. It charges through either of the two USB-C Thunderbolt 3 ports, and with a 45W rating, most USB-C monitors should be able to deliver the power you need.

You have other choices to make too, the most obvious being colour. Dell offers two versions of the XPS 13: ‘frost white’ or ‘platinum silver’. The white version remains surely a little too white for most people, but the grey version is starting to look a tad dull. Dell does its best to enliven the design with a mottled effect on the palm rest, but MacBook lovers aren’t going to swoon.

Your final choices boil down to specification, and the one ‘gotcha’ to be aware of is that your choice of processor also dictates the graphics acceleration on tap. Buy the Core i7 version and you’ll benefit from Intel’s remarkably strong Iris Plus graphics; choose either the Core i3 or Core i5 and you’re stuck with Intel’s UHD graphics. The good news is that all these processors feature Intel’s tenth-generation Core technology, which is faster and more power-efficient than before.

Other caveats? There’s no return of the USB Type-A port - Dell jettisoned this last year - and while Dell does include a USB-C-to-USB-A converter in the box, that’s simply something to lose after two months. There’s no dedicated video output either, so you’ll either be buying a USB-C-to-DisplayPort adapter or connecting up a docking station. 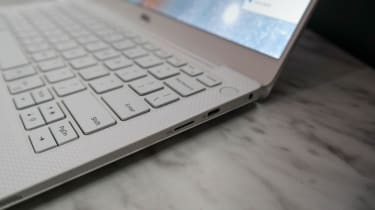 And a docking station does make sense if you can find budget for it, as there are just two USB-C Thunderbolt 3 ports for physical connectivity (along with a microSD card slot and combo mic/headphone jack). Wireless connections are thankfully fast, courtesy of an 802.11ax Wi-Fi 6 chip.

The new Dell XPS 13 is already on sale from Dell with prices starting at £999 including VAT if you buy a version with Windows 10 Home and £1,239 exc VAT with Windows 10 Pro. With Dell currently offering four years of support with the latter, it’s a tempting buy.

When we caught up with a Dell executive after the press conference, she described the company’s efforts to “chase perfection” with the XPS 13. Ever since the original Dell XPS 13, released in 2015, it’s honed and refined the design to the point where this 2020 edition is very close to perfection.

In truth, none of this year’s upgrades will revolutionise your working life, but they add up to a machine that is clearly superior: the tenth gen Intel Core processors are faster and contribute to (probably) better battery life; the keyboard and touchpad are that little bit larger; the screen ever so slightly nicer to use. Unless you can bag last year’s XPS 13 for a bargain price, we recommend you choose the 2020 edition.