Acer’s newest business laptops are worth watching out for 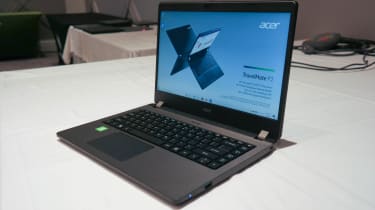 The Las Vegas-based Consumer Electronics Show may be geared towards glitzy home technology, but that didn’t stop Acer sneakily launching a couple of business laptops at CES. And rather nice ones too. This first-look review concentrates on the 14in Acer TravelMate P6, but we spare a few words for its 15in sibling, the P2.

What makes both laptops special is the material Acer uses. If Velcro met Teflon and then had a tumble with carbon fibre, it might just create the magnesium-alloy chassis on show here. Hopefully the photos will give you a better idea of what we’re talking about.

It certainly gets rid of the fingerprints-on-shiny-surface problem. We hesitate to suggest it will solve the other cosmetic problems that beset laptops after a couple of years’ use - dents, scrapes, smears - because we will only know that after the TravelMates have been left to fight in the wild. However, we have a sneaky suspicion that a three-year-old TravelMate P2 or P6 will look remarkably similar to a new one.

We’re always pleased to see manufacturers back up their claims of build quality with proper testing, and Acer claims the P6 (and P2) complies with MIL-STD-810G military standards. It feels suitably robust in the hand, too.

Nor does this mean the P6 is heavy. Acer claims it weighs 1.1kg, which is excellent for a laptop with a 14in screen inside it. There are slimmer machines - Acer quotes a 16.6mm depth - but the P6 will slide easily into most bags.

If Acer’s battery life claims are borne out by our testing, you won’t need to find room for a power supply either. Acer says the P6 can keep going for 23 hours without needing to recharge, and thanks to support for quick charging it can go from zero to 50% in 45 minutes. 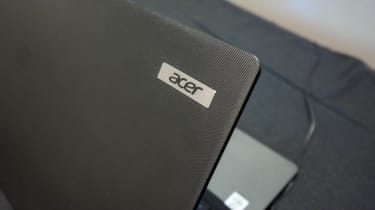 It’s powerful too. Acer backs up Intel’s 10th-Gen Core processors (specs vary but will go up to a Core i7) with the option of Nvidia MX250 graphics, and you can even specify 24GB of DDR4 memory and a 1TB NVMe SSD. Together, that would be a very potent combination.

Add plentiful security features - including a privacy filter on the Windows Hello-compatible infrared webcam and an integrated Trusted Platform Module 2.0 chip - along with Windows 10 Pro and it starts to feel like a high-end, business-like package.

The P6 does have a couple of shortcomings worth noting. The first is that the keyboard dips slightly under the pressure of typing, while there isn’t much travel on the keys. The other is that its bezels are chunky now that we’re in 2020. In fact, we measured the bottom bezel at 35mm and the top at 21mm, which doesn’t compare well to the less than 10mm of sleeker, sexier business laptops.

While the P2’s larger chassis means that it isn’t as portable as its sibling - and note Acer’s battery life claims are for a much-reduced 13hrs - it remains just as powerful. In fact, you can have 32GB of memory here if you wish. There’s a VGA port for older monitors and projectors too.

And it has another big advantage over the P6: availability and price. The TravelMate P2 will be released this month with starting configurations from €599, while we’ll have to wait another month for the P6 and it costs from €1,099.