Acer TravelMate P6: Light, cheap, but not without faults

Acer’s machine is slim, light and versatile, but it’s only ordinary elsewhere 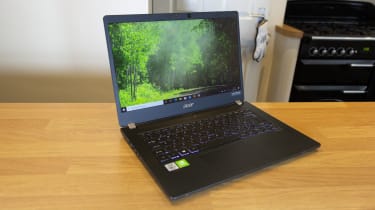 The Acer TravelMate P6 looks unassuming, even for a business notebook, but it does its talking elsewhere. As the name suggests, it’s designed for life on the road, and that means an incredibly light shell alongside plenty of office-friendly features.

The Acer isn’t just lighter than the competition – it’s cheaper than rivals, too. This Acer costs a modest £1,083 exc VAT and competes with the Apple MacBook Air, Dell XPS 13 and LG Gram 14 in a busy marketplace. For equivalent specifications, those rivals cost between £1,124 and £1,374 exc VAT, with the Dell cheapest and Apple the most expensive. Can the Acer punch above its impressive weight?

The TravelMate weighs just 1.1kg, which is fantastic for a 14in laptop – lighter than the Apple and Dell machines by almost 200g, and only 101g heavier than the LG. There’s little to choose between the Acer and its competitors when it comes to thickness, too – the TravelMate is 16mm thick, which means it slots in the middle of its competitors. These dimensions mean that the Acer is incredibly easy to take on the commute or carry around the home or office.

Get beyond the weight, though, and the Acer is less impressive. Like the Gram 14, build quality is mediocre; the Acer is built from a similar magnesium alloy and the base is reasonable, but the screen has too much flex. This laptop is strong enough to cope with daily trips out of the office and it has MIL-STD-810G accreditation like any business machine worth its salt, but the Apple and Dell machines are certainly sturdier.

It’s not eye-catching, either. The black metal is underwhelming, the screen bezels are wide and there are no bold design touches. The Acer is smart and functional, but it won’t turn heads. 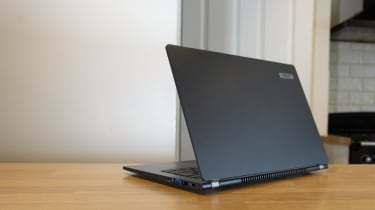 The Acer doesn’t have a numberpad, but its keyboard does have a sensible layout, with a double-height Return key, separate Page Up and Page Down buttons and loads of options on the Function row. There’s a backlight, too, although it’s a little weak.

The keyboard itself is decent, however. Its buttons don’t have a huge amount of travel, but their movement is fast and consistent. They’re soft with a slight feel of snap when they bottom-out, which makes for a comfortable feel – it’s easy enough to type for hours.

The Acer’s pricier rivals have more class, though. The XPS has firmer, faster keys, the LG is firmer and the MacBook is the best in the business. All three are quieter, too.

Acer’s trackpad is middling; easy to click at the bottom but tough to depress at the top. The buttons have a bit too much travel, too. It’s good enough for day to day work, but its competitors are better here.

The Acer has a 14in IPS touchscreen with a 1080p resolution, which is solid for everyday work, and it has a matte finish and great viewing angles. Quality levels are also acceptable: the contrast ratio of 1,374:1 provides ample vibrancy and depth without becoming oversaturated. The average Delta E of 2.48 and the colour temperature of 6,717K are not the best results, but easily good enough to deliver realistic colours in day-to-day scenarios. 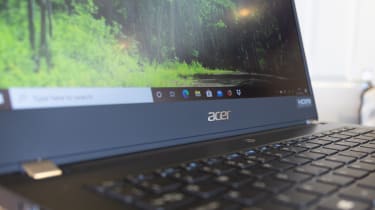 Those colours figure aren’t good enough to handle scenarios where accuracy is key, though, and the Acer’s panel only rendered 92.3% of the sRGB gamut and 67.6% of the Adobe RGB gamut, so it’s not got the range of colour support required either.

The Apple panel is brighter, sharper and has better colours, and the Dell has two options: the 1080p display has superior colours, while the 4K display had improved contrast.

The Acer boasts a Core i7 processor with Intel’s Comet Lake architecture, and the i7-10510U has a reasonable specification – its base clock of 1.8GHz attains a turbo peak of 4.9GHz, and its four cores have Hyper-Threading. The CPU is joined by 16GB of dual-channel memory and a low-end Nvidia GeForce MX250 discrete GPU. The 1TB SSD delivers read and write speeds of 3,545MB/s and 2,860MB/s, which are impressive speeds that keep the machine feeling lively.

The Acer’s middling benchmark score of 76 is three points better than the LG, which had issues with temperatures and speed throttling. The Acer’s Geekbench scores of 1,210 and 3,285 beat the MacBook Air, which we reviewed with a Core i5 CPU – but the Core i7 version of the MacBook will offer similar performance to the Acer.

The biggest challenge to the TravelMate’s performance comes from Dell. That machine used a Core i7-1065G7 with a newer, more efficient architecture, and its benchmark score of 89 outpaced the Acer. 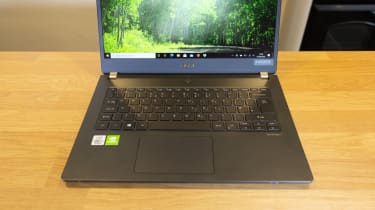 This laptop doesn’t have market-leading power, but it’s smooth and responsive in day-to-day use and has no problem with Office applications, browsers with loads of open tabs and mainstream photo-editing. The Acer will only struggle if you try to run tough work applications, like high-end video, database or design tools – or if you want to run loads of demanding software simultaneously. The graphics core delivers a small performance boost over the Intel Iris Plus core inside other machines, but it’s not enough of a leap to deliver a significant improvement – especially as it’s the weaker version of Nvidia’s GPU, with just 2GB of dedicated memory.

However, this decent real-world performance is paired with fantastic battery life. In our conventional video playback test with the display at 170cd/m2 the Acer lasted for a monster 14 hours and 21 minutes, and with the screen dialed back to 100cd/m2 the Acer’s longevity extended to 16 hours and 36 minutes. That’s better than any rival – the LG was a little poorer, the Dell’s Full HD model lasted for 11 hours, and Apple’s machine was noticeably worse.

The TravelMate includes a solid slate of business features. Connectivity is excellent, with Wi-Fi 6, Bluetooth 5.0 and Gigabit Ethernet. The exterior serves up one super-fast USB 3.2 Gen 2 Type-C port that supports Thunderbolt 3, DisplayPort and charging, and there are two full-size USB 3.2 Gen 1 connectors. It also has a microSD card reader, an audio jack and a Kensington Lock slot. There’s HDMI 2.0 as well, which means 4K output support at faster framerates than the more common HDMI 1.4 standard.

Then there’s TPM 2.0, a 1080p webcam with a privacy shutter and IR (adding Windows Hello compatibility) and a fingerprint reader in the power button. If you talk to Acer for large-scale business deployments, it’s even possible to have this machine configured with a smart card reader, SIM card support and NFC.

You don’t get Intel vPro, but you do get a bit too much bloatware – not everyone wants Dropbox, Evernote, Booking.com and Norton security preinstalled. The speakers are mediocre, too – they’ve got reasonable volume and clear mid-range sounds, but the bass and top-end noises are weak. They’re fine for casual media duties, but nothing more. 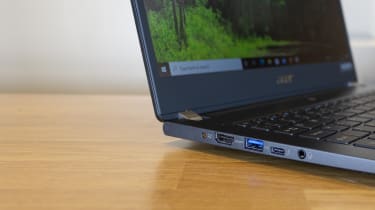 The TravelMate noticeably outstrips its rivals in terms of features; the XPS has no full-size USB ports, no HDMI and no Ethernet. Apple’s machine has a couple of Thunderbolt 3/USB Type-C ports, but that’s it. The LG got close to the Acer, but it had no on-board Ethernet port and its webcam didn’t support IR.

The TravelMate we’ve reviewed is the priciest option. If you don’t need a touchscreen, then an £842 exc VAT model gets rid of that functionality, and you can pay £692 exc VAT for a model with no touchscreen and no Nvidia graphics.

There’s a lot to like about the TravelMate: it’s lighter and cheaper than rivals, and it has superb connectivity and business features. Its battery life is brilliant, too; this machine will easily last a long day in the office and the commute, and if you’re careful you can coax it through most of a second day too.

The lower price and lightweight body do mean it’s more ordinary in other departments. The screen and internal hardware are ideal for day-to-day use, but nothing more. The keyboard and trackpad are decent but bettered elsewhere, and other machines are more robust.

If you need a laptop that’s cheaper and lighter than the big ultraportable names, though, the Acer TravelMate P6 is well worth considering – especially if its rivals don’t offer the connectivity required.