Mind-bending PC is a fully-fledged foldable for business users 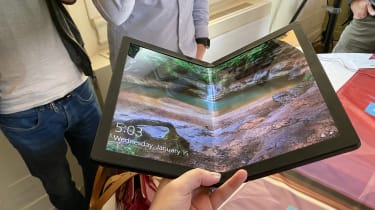 The Lenovo ThinkPad X1 Fold could be a watershed moment for the somewhat standstill PC industry. Despite all the attempts to evolve laptops beyond their familiar form, such as Lenovo’s own efforts with its dual-screen Yoga Book device, none have stuck. But the ThinkPad X1 Fold, which Lenovo is touting as the “the world’s first foldable, fully functioning PC”, could be the future of PC design. And what’s more, unlike similar devices from Dell and Intel, it’s not just a concept or prototype - Lenovo claims it’ll be released in mid-2020.

IT Pro managed to get some hands-on time with the flexible machine at an event in Bologna, Italy to see if this flexible form factor could be the future of the business PC.

Design-wise, the Lenovo ThinkPad X1 Fold is incredibly flexible - in more ways than one. Though on first glance the device looks like an oversized Windows tablet, it can be folded to create a half-size laptop form, with a keyboard magnetically attaching to the lower portion of the screen to create a true typing experience. Perhaps more impressively, this bundled add-on - which provides the full feedback you’d expect from a ThinkPad keyboard - automatically recharges once the X1 Fold is closed shut.

The machine, which Lenovo boldly claims can replace both tablets and laptops as a portable device built for productivity, can also be used with a virtual keyboard when folded and propped up on its kickstand, or stand-mounted for a mini-PC-like experience. It even comes with a built-in stylus that feels impressively weighty in hand, ideal for on-the-go doodling and note-taking. 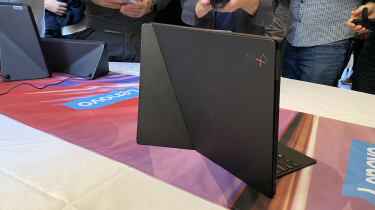 In the flesh, the ThinkPad X1 Fold seems impressively durable, with Lenovo clearly keen to avoid association with Samsung’s glitch-prone Galaxy Fold. The hinge, which is similar to that seen on Motorola’s Razr reboot, is impressively rigid, and there’s no unnerving flex once the ThinkPad X1 is unfolded fully. Lenovo claims this is because its engineers took four years to develop the mechanism, which moves around four separate points to avoid wear-and-tear and wrinkles on the screen. Though the firm claims the screen folds “entirely flat” thanks to this designed-from-the-ground-up hinge, there is a visible crease down the centre of the display, just as with the Galaxy Fold - but this is barely noticeable when the device is used in laptop-mode.

Adding to its durability, the ThinkPad X1 Fold sports an outer case crafted from smart-looking leather, which not only transforms the device into a makeshift fancy leather notebook when closed but should ensure the device doesn’t get scuffed when shoved into your bag. What’s more, Lenovo has equipped the device with an LG-made plastic OLED (pOLED) screen that’s resistant to scratches and has undergone ”extensive durability testing” to ensure it doesn’t meet the same fate as Samsung’s first-generation foldable smartphone. Lenovo says the panel should withstand hard taps, tracing and even drops.

While we’re glad Lenovo has opted for a hard-wearing screen, the pOLED coating is frustratingly reflective and not as vivid as more traditional OLED panels, such as that on Dell’s XPS 15 OLED. We’re also not hugely fond of the chunky bezel surrounding the 13.3in panel, as it gives the ThinkPad X1 a rather old-fashioned appearance, despite its futuristic form factor. However, the panel’s 2,048 x 1,536 QXGA resolution ensures everything still looks pixel sharp, and its 4:3 aspect ratio feels more natural than the 16:9 aspect ratio used by many Windows tablets.

The benefit of a foldable screen is that, when closed, the X1 Fold's horizontal length gets cut in half. Of course, this also doubles its thickness; The X1 Fold is 1.1in thick, which is twice as thick as the thinnest laptops on the market right now.

Though it’s due to be released in just a few months’ time, Lenovo is yet to give us the full skinny on the ThinkPad X1 Fold’s internals. It has told us, however, that it’ll pack an Intel Core chip with Hybrid Technology, likely the Lakefield hybrid processor that will power Microsoft’s upcoming Surface Neo. Elsewhere, there’s integrated Intel Gen 11 UHD graphics, 8GB RAM, and up to 1TB of SSD storage. 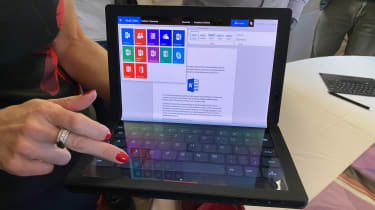 You’ll also find a 50Wh battery under the hood, which Lenovo tells us will keep the ThinkPad X1 Fold juiced for an impressive 11 hours; we haven’t had a chance to test this yet, naturally, so check back later in the year for a full review. The device also supports Lenovo’s Rapid Charge technology, which lets you refuel the battery to 80% in around 30 minutes.

Lenovo is positioning the Thinkpad X1 Fold as a device for professionals and executives on the go, rather than a consumer product, so it’s not surprising that the company is equipping the ThinkPad X1 Fold with Windows 10 Pro to ensure it ships as an enterprise-ready machine complete with Remote Desktop, Client Hyper-V, and Direct Access. Its decision to ditch Microsoft’s Windows 10X operating system, which has been designed with foldable form factors in mind, also means the X1 Fold will run legacy 64-bit programs out of the box, something that Windows 10X doesn’t support.

This decision also means, though, that Lenovo has had to add its own software on top of Windows 10 to ensure it can handle split-screen mode; a virtual button to the bottom bar which allows for portrait, landscape, and landscape with virtual keyboard splits. Unfortunately, the device we tested was a “near-final prototype” and wasn’t running functional software, so we’re yet to see how well this split-screen mode works in a real-world environment.

Despite being targeted at connectivity-hungry business workers, the Lenovo ThinkPad X1 Fold is somewhat lacking in the port department, packing only two USB-C ports (1x Gen 1, 1x Gen 2). However, Lenovo tells us that this is more than enough, as users can connect full-size keyboard and mouse and a second display via USB Type-C.

The device, along with the Yoga 5G, is also one of the first Lenovo laptops to offer built-in 5G connectivity thanks to an integrated SIM slot that supports both 4G and 5G connectivity. While this next-gen connectivity is still not a viable option for many in the UK, for those in a city that has been graced with 5G, the ThinkPad X1 Fold could be the ultimate on-the-go productivity device. 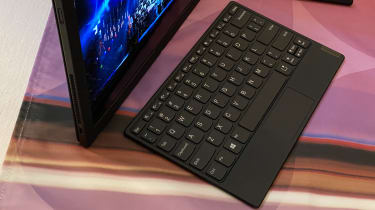 The Lenovo ThinkPad X1 Fold feels revolutionary. Sure, it’s not perfect - the screen is overly reflective, its under-the-hood credentials remain a mystery and it’ll set you back some $2,499 (around £1,195) when it arrives on shelves later this year. However, the device is hopefully a sign of things to come from a PC industry that has been lacking in both excitement and innovation for far too long.