PC vendors are struggling to meet demand amid COVID-19 pandemic 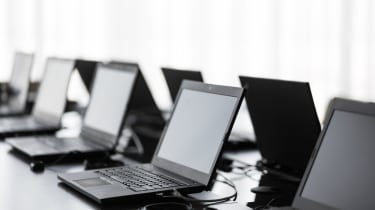 The effects of the global COVID-19 pandemic is preventing vendors from efficiently addressing mobile PC demand in Europe, the Middle East and Africa, the latest research from IDC reveals.

According to the analyst firm, the overall traditional PC market in the EMEA region saw a year-on-year decline of 3.1% during Q1 2020, totalling 16.4 million units, as manufacturing and logistical supply chain constraints began to take hold. The commercial market still achieved a small growth of 0.7% year-on-year, the research firm found, but this was not enough to offset a heavy consumer decline of 8.5% year-on-year.

In Western Europe, the PC market contracted by 1.2% year-on-year, as 3% commercial growth was hindered by a hefty 8.9% drop in consumer decline.

There was also a stronger growth rate of 6.3% for desktops in the commercial sector during Q1, thanks to greater insulation from manufacturing supply chain problems, as well as demand from the last users upgrading from Windows 7.

Notebooks, however, saw lower growth of 0.9% due to a heavier reliance on factories in China, IDC said. With the sudden increase in people working and studying from home, demand for mobile devices spiked, leaving manufacturers unable to match demand.

"The logistical impacts of COVID-19 also continue to bottleneck the supply chain," said Liam Hall, senior research analyst at IDC Western Europe Personal Computing. "With passenger flights almost at a standstill, OEM's are having to substitute air freight shipments for sea, and where possible rail, increasing lead times and impacting their ability to address the big bookings that have risen as a consequence of the higher demand."

Despite factories in China restarting production, the supply chain has yet to return to normality, IDC added. During the period, consumers have largely prioritised portable devices such as notebooks and tablets for remote working – creating increased demand in countries that have imposed lockdown measures.

In Central and Eastern Europe, this resulted in a PC market decline of 3.1% year-on-year, as well as desktop and notebook declines of 4.9% and 2.1%, respectively. Consumer demand dropped by 8.2% year-on-year, while the commercial segment saw strong growth of 4.2% thanks to some public and corporate tenders being fulfilled in the region, IDC explained.

"The MEA region, on the other hand, was unable to sustain any growth and contracted 10.8% YoY," said Nikolina Jurisic, product manager at IDC EMEA. "Markets across the region have been badly affected not just by constraints in the supply chain, but also by oil prices.

"The commercial segment was hit the most, with a market contraction of 13.7% YoY, while the consumer segment recorded a decrease of 7.9% YoY."