The name may have changed, but all the core ingredients of a Portégé laptop remain 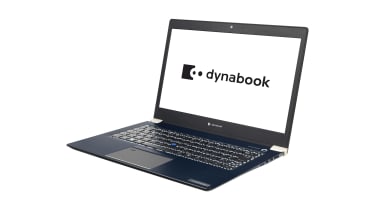 You may remember that last year, Toshiba’s laptops and end-user devices group spun out into its own entity, with the newly-independent company emerging under the ‘Dynabook’ banner. The Toshiba brand is slowly disentangling itself from the all-new entity, and the Dynabook Portégé X30F-14U is the first properly standalone entry from the fledgeling manufacturer.

This is the first true Dynabook laptop we’ve seen – complete with a substantial silver logo on the lid. While you’ll still see a Tosh logo embedded into the default wallpaper, this feels like the final goodbye. If you were hoping for a dramatic change to mark the event, though, you’ll be disappointed.

To say this is business as usual is somewhat stating the obvious. The Portégé X30F-14U is finished in Toshiba’s trademark onyx blue, and if you’ve used any Portégé of the past five years then you’ll know what to expect: slim dimensions, light weight and solid build quality.

The keyboard is, aside from one irritation, an excellent affair. We’re fans of its combination of a quiet sound with a deep travel; if you’re a touch typist, or simply used to mechanical keyboards, this is as close as you can come to that same feel on a compact keyboard. The sole irritation is the spacebar, which should be positioned a fraction to the right: our thumb kept hitting the AltGr button, which sits directly under the M.

The touchpad is small, too, and that’s partially because Toshiba has put physical mouse keys above it (similar to Lenovo’s ThinkPad range), with the idea that they will work in combination with the trackpoint. It’s a high-quality touchpad, with a glass finish to keep friction to a minimum and support for Windows’ precision gestures.

Security comes in many forms, as we’d expect from a Portégé laptop. First the tiny fingerprint reader, which is integrated onto the touchpad, then infrared cameras for Windows Hello, and there’s also a smart card reader on the right-hand side. The Portégé supports Microsoft’s modern standby function, too, which promises “instant” on. In reality, you’ll have to wait a second or two while the infrared cameras scan your face, but that’s far quicker than resuming from standby used to be.

Curiously for a laptop with enterprise aspirations, the X30F-14U doesn’t include a vPro processor so you can’t use Intel’s active management technology (although note that there is a trusted platform module). The Core i7-8565U is a familiar chip, and while its overall score of 84 in our multitasking benchmark tests is respectable, we hoped for more bearing in mind the 32GB of RAM.

In truth, there is little point paying extra for a Core i7 rather than Core i5 in an ultraportable unless it has epic cooling to allow the processor to reach its full potential, and of the Dynabook’s obvious competition only the Dell XPS 13 can claim that. Here, the X30F’s chip was often stuck at around 2GHz rather than its Turbo Boost speed of 4.6GHz. The Dell was 14% faster with a score of 96.

We hoped for more battery life from the X30F, too. It’s perhaps churlish to complain about 7hrs 44mins, but the Dell lasted for 10hrs 35mins in the same test. Where the Dynabook wins is portability, as its weight of 1.05kg is excellent for a 13in business laptop. The magnesium chassis feels well built; as ever, don’t be too concerned by the flexibility of the lid, as that can come in useful if it’s bashed.

Aside from the fact it supports touch, the screen is nothing special. But a matte finish, a top brightness of 303cd/m2 and strong colour accuracy – it covers 95% of the sRGB gamut with an average Delta E of 0.75 – mean it’s well suited to office life. While it wouldn’t be our go-to machine for boxset binges, a contrast ratio of 1,030:1 means scenes look punchy, and the speakers are decent.

We were half-hoping for 802.11ax Wi-Fi, but Dynabook sticks with the Intel Wireless-AC 9560 offering. A lonely USB slot sits on the left-hand side – only a Kensington lock slot and 3.5mm jack keep it company. On the right are two Thunderbolt 3 ports, with support for data transfer, DisplayPort and power (there’s no dedicated power input). There’s even full-size HDMI and a microSD slot.

Dynabook estimates this spec will cost between £1,599 and £1,999 exc VAT, depending on the quantity you buy from your reseller. To quote a spokesperson: “X30F-14U is an ultra high spec laptop and we are only offering it on a build-to-order basis to those customers which have the budget.” Given the 1TB SSD and 32GB of RAM, that’s sensible.

However, there’s no hiding from the value-for-money question. Earlier this year, we reviewed the business-friendly 13in Acer Travelmate X5, which is 946g and feels just as well made; that machine only cost £900 inc VAT. Toshiba loyalists will be happy with the Portégé X30F if they’re lucky enough to receive one, but there’s no opportunity for the new company to rest on its laurels. Dynabook will need to innovate, not simply follow the same route as Toshiba.