The Aero has vast power levels and a great screen, but it’s not sleek or stylish 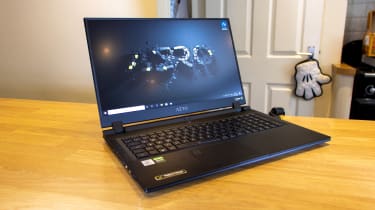 The Gigabyte Aero 17 HDR XB is a powerful, expensive laptop that deploys a brand-new Intel 10th Gen CPU and high-end Nvidia graphics in a bid to handle virtually any work task – no matter how demanding.

This powerful portable squares up against the Apple MacBook Pro 16in, though, so it’s got a tough challenge ahead. It’s hardly cheap, either – the Aero will set you back £2,250 exc VAT.

Gigabyte’s machine looks decent, with a dark, matte aluminium body that’s got smart grilles with triangular patterns. It looks subdued – and, helpfully, the keyboard RGB LEDs are easy to tone down or turn off.

The Aero has middling build quality, though. The wrist-rest has too much movement, and the desktop image distorts a little when the screen is pressed. On top of that, the exposed seams and occasional sharp edges are annoying. This machine isn’t ruinously weak, but a protective sleeve would be a good idea.

It’s not overwhelmingly slim or light, either – the Aero weighs 2.5kg and is 21.4mm thick. Apple’s competing machine weighs 2kg and is only 16mm thick, and the Aero’s 17.3in screen makes it wider, too. The MacBook Pro also has better looks and build quality.

The Aero’s keyboard is a full-size unit with a numberpad, as well as RGB LEDs and loads of Function Row options – including connectivity, fan mode and trackpad-locking toggles. The keys are consistent, comfortable and quiet, with a good balance between fast typing and a soft, cushioned motion. It’s effective and unfussy. 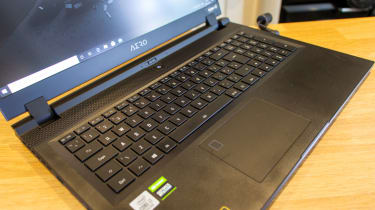 The MacBook has keys with a little less travel, and it doesn’t have a numberpad. Apple’s machine does have keycaps with a snappier feel – and some people will prefer that over the softer Aero. The Aero’s touchpad, meanwhile, is comfortable and accurate, with two crisp, responsive buttons. However, it’s noticeably smaller than the MacBook’s pad, and it doesn’t have any pressure-sensitivity options.

The Aero’s 17.3in screen has a 3,840 x 2,160 resolution. This 4K specification means you get a huge amount of space – whether you need to open multiple windows or see fine detail.

It’s certified by X-Rite Pantone, and delivers fantastic colours. The Aero’s Delta E of 1.47 is superb – human eyes won’t detect any deviations. That figure is bolstered by excellent gamut coverage levels: this display handled 99% of the sRGB and Adobe RGB gamuts with coverage volumes above 100%. The colour temperature of 6,117K could be closer to 6,500K, but it’s not errant enough to cause issues.

Those results mean that the Aero can be used to work with confidence in either colour space. Real-world use backs it up – the Aero’s display is vibrant and accurate, with incredible clarity. Its colours are just as bold as those on the MacBook, and the Aero has the added bonus of a crisper, higher-resolution.

The brightness level of 541cd/m2 is vast – you can work indoors or outdoors on this machine. The black point of 0.39cd/m2 is reasonable, and the contrast level of 1,387:1 is excellent. Those figures mean the Aero’s display serves up bold, punchy colours with good detail and reasonable depth. 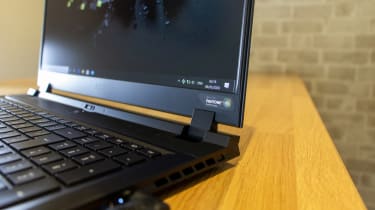 This display isn’t ideal for other situations. HDR, for instance: despite its name, the Aero’s display only adheres to DisplayHDR 400 and it only rendered 86% of the DCI-P3 gamut, so don’t expect big improvements - the MacBook is better here. Don’t look at this screen if you want a high refresh-rate, either – it peaks at 60Hz.

The Gigabyte is also better than other rivals when it comes to the display: the Dell XPS 15 also has a 4K panel, but its sRGB gamut coverage and brightness levels aren’t as good. Dell’s machine has a marginally better contrast ratio, but it’s not enough to overtake the Aero.

The Aero is powered by a new Intel Comet Lake CPU. The 10th gen Core i7-10875H will likely function as a replacement for the popular Core i7-9750H – the chip used in cheaper MacBook Pro 16 models.

The new chip has eight hyper-threaded cores alongside base and boost speeds of 2.3GHz and 5.1GHz. That’s huge – virtually indistinguishable from the Core i9-9980HK included in the £3,249 exc VAT MacBook Pro that we reviewed.

The Aero’s new CPU is joined by 16GB of memory, a 512GB SSD and an Nvidia GeForce RTX 2070 Super graphics core. That latter part is powerful, with 2,560 stream processors, 40 dedicated Ray-Tracing cores and 8GB of memory. 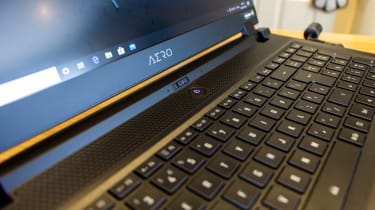 In our benchmarks the Gigabyte scored 229, which is superb. The older Core i7 CPU just can’t compete - it was used in the Acer ConceptD 5 Pro, and that laptop only returned a benchmark score of 171. Crucially, cheaper MacBook Pro 16 models still use that older Core i7 CPU.

Impressively, the 10th Gen chip is only 20 points short of the MacBook Pro 16 we reviewed, which had the Core i9 CPU, twice as much memory and a far higher price. The SSD is impressive, too: its read and write speeds of 3,513MB/sec and 2,987MB/sec equal the MacBook.

The Gigabyte provides loads more graphical power than the MacBook. In the 3D Mark Fire Strike test, the Aero returned a result of 17,661 points – while the MacBook’s AMD Radeon Pro 5500M 8GB scored under 10,000 points.

The Aero will handle photo-editing, encoding and even some high-end database and CAD tools. When it comes to CPU-based tasks, you’re only going to need more power if you want to run workstation-level software. If that’s the case, the Apple’s Core i9 variant will be more potent, albeit at a far higher price.

On the graphical side, the Aero will tackle virtually anything and is far more capable than any of the Apple specifications. The only thing better is a professional GPU, like the Acer’s Nvidia Quadro RTX 3000. In the Cinebench OpenGL test, which is focussed on professional graphics, the Gigabyte scored an impressive 130.63fps, but the Acer was 60fps faster. 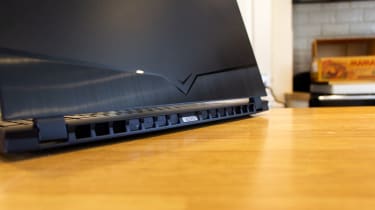 The Aero’s internal temperatures are fine, there are no major speed throttling issues, and noise levels are reasonable – consistent, not too loud and easy to mask with a headset or speakers.

However, the area above the keyboard and the base panel both became very hot during tougher benchmarks. This laptop is likely to remain planted to a desk, but it’s still worth bearing this in mind.

It’s only average when it comes to battery life. In our test the power pack lasted for 5hrs 12mins. That’s reasonable, and it’ll see you through to lunch with this machine – but it’s still two hours short of the MacBook.

The Gigabyte is eminently practical, too. The Aero has three USB 3.2 ports, a USB-C/Thunderbolt 3 connection and a card reader. It also has two audio jacks and HDMI and mini-DisplayPort connectors. Internal connectivity is impressive as well, with dual-band WiFi 6, Bluetooth 5 and Gigabit Ethernet. The webcam has a privacy cover and the trackpad has a built-in fingerprint reader for biometric identification.

From a business perspective, there’s not much missing. That webcam is a little disappointing: it’s installed at an awkward angle below the screen, and there’s no IR functionality for facial recognition. We also wish that 2.5Gb/ps Ethernet was included – and there’s no Kensington Lock slot either. 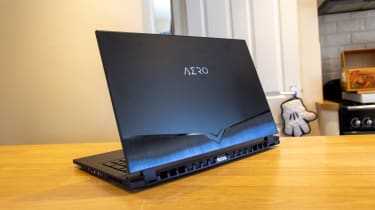 The speakers aren’t particularly good. They’re loud, but they’re tinny and don’t have much bass. The MacBook Pro is miles better, and with a far better microphone too.

Nevertheless, it’s a superb set of features. Apple’s machine has a crisper webcam with a better microphone, but it has no privacy screen, no Wi-Fi 6 and no full-size USB ports.

Elsewhere, the Aero has a stunning 4K screen with more detail than Apple’s display, and the Aero has great ergonomics and impressive internal and external connectivity.

In some areas the Aero does fall behind. It’s heavier, thicker and uglier than the MacBook, and not quite as strong. Its battery life doesn’t match up, either. If you don’t need its performance, a cheaper MacBook Pro 16 will be sleeker.

If you do need this level of CPU and graphics power alongside a 4K screen, though, there are few machines better than the Aero. For some people, it’s a MacBook-beater.