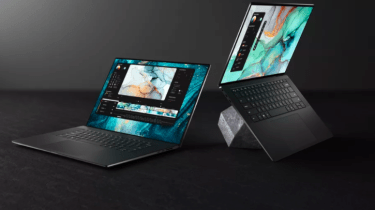 Dell has introduced a redesigned version of its XPS 15 2-in-1, alongside a 17in model which it claims is its "most powerful XPS laptop ever".

The introduction of a 17in model sees the Dell XPS 17 branding making a comeback after a 10-year hiatus. Its seen a bit of an upgrade too, as the 2020 model sports an all-new four-sided Infinity Edge display, which Dell claims makes it smaller than 48% of 15in laptops available today.

The tiny bezels flanking the display, which is available with an optional 4K UHD+ (3840 x 2400) resolution, house Dell's "smallest ever" HD webcam, particularly useful now given the soaring usage in video conferencing services as the majority of employees work remotely.

In terms of battery life, Dell claims the XPS 17 will last for up to 20 hours with the display set to FHD+.

The all-new Dell XPS 15 shares many of the XPS 17's features. It also sports a four-sided Infinity Edge screen, packs Intel's latest 10th-generation CPUs and is offered with an Nvidia GeForce GTX 1650 Ti GPU. It even boasts a better battery than its 17in sibling, with Dell stating the laptop will run up to 25 hours on FHD+.

Both machines maintain the XPS series' much-loved machined aluminium chassis, though Dell has introduced a new hinge to make room for the new stunning 4-sided InfinityEdge display. The XPS 15 and XPS 17 also both feature a fingerprint sensor with Windows Hello baked-in, Wi-Fi 6 support and quad speakers.

In terms of ports, the Dell XPS 15 and 17 sports two and four Thunderbolt 3 ports, respectively, alongside an SD card reader and a 3.5mm headphone port.