The dual-screen design has its uses, but it introduces big compromises too 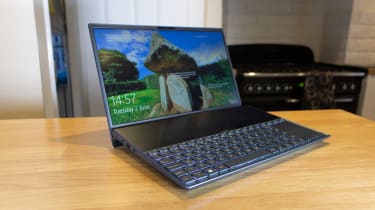 There aren’t many laptops that look like the Asus ZenBook Duo UX481. This stylish machine seems conventional, but lift the lid and you’ll find a huge secondary screen above a repositioned keyboard and trackpad.

Asus reckons that this dual-screen arrangement will be particularly helpful for creatives, and an Intel 10th Gen CPU and discrete Nvidia GPU power this innovative machine.

The UX481 looks superb: navy aluminium coats the system, with a sleek Asus logo on the lid. Build quality is impressive, too. We’ve got no qualms about slotting this machine into a backpack – it’s robust enough to cope.

Asus has used its smart ErgoLift hinge on this machine. This mechanism pushes the rear of the base section upwards, which angles the keyboard, trackpad and second screen towards the user.

There’s a lot to like about the UX481’s design, but this machine isn’t always impressive. It weighs 1.55kg and it’s 19.9mm thick, and there are plenty of visible seams alongside relatively thick screen bezels. 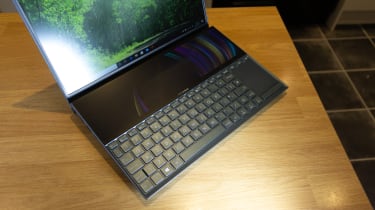 Both of those machines look arguably smarter than the Asus, too, although obviously neither has that second display – only Apple comes closest with its TouchBar.

The Asus isn’t without some minor design irritations, either. The hinge mechanism is stiff, which makes it impossible to ease the lid open with one finger. And, while this laptop has rubber feet, they don’t provide much grip. The keyboard and trackpad positioning also mean that this machine is awkward when used on a lap – mainly because there’s nowhere to place your wrists.

The positioning can be awkward, and the UX481’s design impacts on the keyboard in other departments. The keys are shorter than they are on rivals, which makes them feel cramped. The cursor keys are not separated, the Shift buttons are small, and the Return key is single-height. Unsurprisingly, you don’t get a numberpad either. It’s a shame, because the keys themselves are great: they’ve got decent travel, a consistent and comfortable action and a pleasing snap.

The trackpad is shunted to the right of the keyboard, and it’s narrow – one swipe of the pad doesn’t get you across the whole display. The pad is responsive and the buttons are good, but a USB mouse would be a better option for most people. 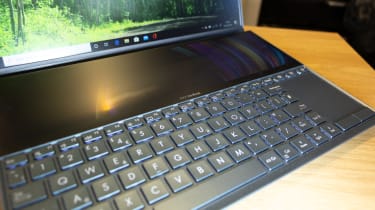 Conventional rivals are better in both departments. The Apple and Dell machines don’t have numberpads, but their buttons are snappier and spacious, and they have bigger trackpads.

Asus says that the lower display can be used in several different ways: to hold secondary tools, to take notes, or for viewing timelines in audio and video apps. It’s managed with Asus’ ScreenPad Plus Launcher, which can group apps together. A handful of third-party apps are optimised for the second display, including Dropbox, Acrobat Pro DC, Spotify and Adobe’s Creative Cloud and Premiere Pro – but we wish there were more.

The main display offers good quality. It has a Delta E of 0.97 and a colour temperature of 6,580K, and they’re both great figures – colours have near-perfect accuracy. The brightness level of 321cd/m2 is good enough for indoor use, and the contrast ratio of 1,035:1 is reasonable for an IPS screen. It’s certainly high enough to provide good punch and depth.

The Asus doesn’t always succeed, though. While its sRGB coverage ratio of 95.6% is good, this screen couldn’t get beyond 70% coverage in the Adobe RGB or DCI-P3 colour gamuts. The Dell is better here, with optional 4K displays and a 1080p option that’s brighter, with better contrast. The MacBook Pro is better, too: its screen is crisper, with bolder contrast and 99% DCI-P3 coverage. 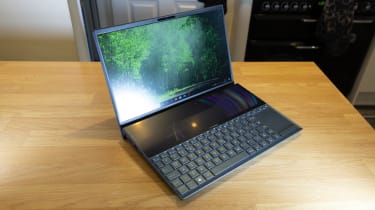 Similarly, the secondary screen has a punchy contrast ratio of 1,465:1, but its shallow viewing angle means it looks washed-out. While it’s good for note-taking and running secondary software, it’s not ideal for colour-sensitive work - not that you’re likely to be using it for such.

The UX481 serves up impressive speakers – they pair solid volume with clear, crisp sounds at every part of the range and even some bass. For casual music and media duties they’re good, although the MacBook remains louder and more detailed.

In its standard operating mode, the Asus returned a benchmark score of 103, and in High Performance mode, that figure increased to 106. Happily, it remained cool and quiet in every test. It’s a reasonable result, and it means that the Asus can handle mainstream work tasks, with the ability to tackle any Office or browser-based app. Its single-core speed and modest discrete GPU enable it to handle mainstream photo-processing work, although the Nvidia core is only a little better than Intel’s own integrated graphics.

The SSD also delivered read and write speeds of 1836MB/s and 978MB/s. That keeps the UX481 feeling snappy, but the high-end NVMe drives in the Dell and Apple machines are 1GB/s better when reading and twice as fast when writing. 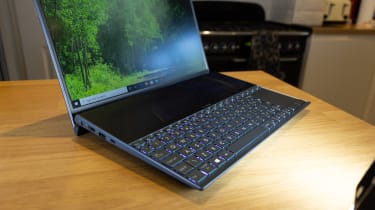 The Asus’s Core i7 chip compares well to current Dell XPS 13 machines. Dell’s pricier laptops start at £1,290 exc VAT and include the Core i7-1065G7, which is a low-power 10nm chip. We’ve tested that CPU inside other machines, and it scored 104 in our benchmarks.

The last MacBook Pro we reviewed used an 8th Gen Core i7 CPU and it scored a whopping 150 in our benchmarks. Combine that CPU speed with Apple’s better storage, and it’s clear that even the older MacBooks will be faster than both the UX481 and the Dell.

The UX481 delivered excellent longevity, too. In our battery test it lasted for 11hrs 49mins. That’s a stellar result – three hours better than the MacBook, and an hour better than the Dell XPS 13 in its 1080p guise. This machine will handle a day in the office – as well as the commute there and back.

Above the screen is an IR-capable webcam that supports Windows Hello, and the Asus has two full-size USB 3.1 ports, a USB-C connection, a microSD card slot and an HDMI output. On the inside there’s a TPM 2.0 chip, and internal connectivity is handled by WiFi 6. 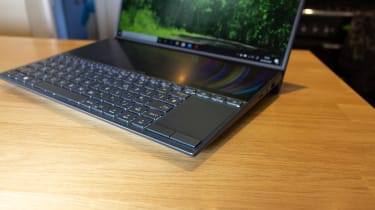 The Asus is better than rivals here– the Dell has WiFi 6, a card reader and two Thunderbolt ports that can handle data transfer and power delivery, but that’s it. The MacBook Pro has Thunderbolt, too, but no WiFi 6.

There’s no doubt that the UX481 still misses some features, though. It doesn’t have Thunderbolt, its USB-C connection doesn’t charge, and there’s no SD card slot, fingerprint reader or Gigabit Ethernet.

Asus has pushed boundaries with the UX481, and there are areas where this machine succeeds. The primary screen offers good quality for sRGB work, and the lower panel is useful for secondary apps. The Asus has smart looks, solid performance and superb battery life.

In key areas, though, the daring design means uncomfortable compromise. The cramped keyboard and trackpad can’t compare to Dell and Apple’s offerings, and the Asus is thicker and heavier than rivals.

If you’re going to use the secondary screen, then you may be able to accept these issues. If it’s not going to be integral to your work, though, conventional laptops remain better.