While undoubtedly a quality laptop, the latest XPS 13 steps back as well as forward 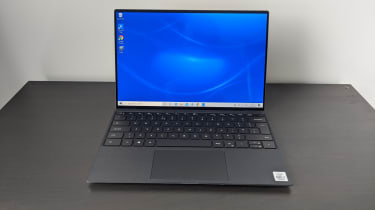 For years there’s been a sense that if you’re going to drop a lot of cash on a slim, light Windows laptop, it might as well be on a XPS 13. Dell’s premier ultraportable has gone through several annual updates and every one has been excellent - though the 2019 edition saw the ambitiousness of its upgrades pared back somewhat.

What about this, the new 2020 model? On the inside, it’s adopted Intel’s 10th gen chips, picking up 802.11ax in the process, and unlike the 2019 model, the outside isn’t practically identical to what came before.

The new XPS 13 was only ever going to be pleasingly portable, but this time Dell has managed to shave some millimetres off the edges; notice how the keyboard now reaches right up to either side, no longer leaving empty space in between. This is partly thanks to the new fingerprint sensor-slash-power button, which is now integrated within the keyboard - up next to the Delete key - and not off to the side of it.

This leaves the XPS 13 a very bag-friendly 296mm wide, which is great even by ultraportable standards. In the slimness stakes it’s also more than a match for the 2020 Apple MacBook Air, measuring just 14.8mm at its thickest point, and it weighs a modest 1.27kg.

Also helping in this regard are the tiny bezels - though Dell has still managed to squeeze a 720p webcam in the top border - and the clean-cut, aluminium and carbon fibre chassis. Like any XPS 13, this combination looks and feels wonderfully luxurious, not to mention impressively sturdy. 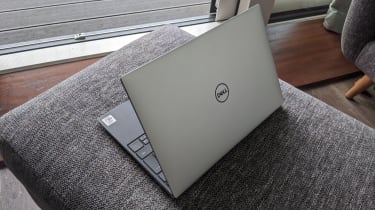 The same is true of the keyboard. There’s not much travel depth to each press, but the key switch mechanism feels satisfyingly firm and responsive. The fingerprint sensor doesn’t mess up the layout either: there are several comforts of a much larger keyboard here, including a double-height Enter key and comfortably wide Backspace and Shift keys. It’s equipped with a cool white backlight too, which can be dimmed or switched off with the function keys.

The trackpad, too, is exceptionally smooth, with a matte-looking but incredibly silky finish that makes swiping and scrolling almost a pleasure in themselves. Even the integrated left- and right-click buttons have a decisive, substantial response.

You can choose to fit your XPS 13 with either a Full HD (1,920 x 1,200) or 4K (3,840 x 2,400) resolution display, in either glossy touchscreen or matte non-touch flavours; our review sample was a top-of-the-line model and thus had a 4K touchscreen. In any event, the screen will measure 13.4in diagonally and have a 16:10 aspect ratio, which makes it taller and therefore a little better for reading web pages and documents than the more common 16:9.

Our colourimeter tests revealed a mix of respectable and underwhelming results. Contrast ratio and peak brightness are both good, at 1,441:1 and 362cd/m2 respectively; the latter helping cope with reflections on the shiny glass. However, sRGB coverage of 86% and an average delta-E of 4.01 shows that this 4K panel struggles to reproduce every colour accurately.

Anecdotally, it’s still a decently vibrant screen, and that high resolution keeps text and images looking razor-sharp. Still, our sister site Expert Reviews tested the Full HD, non-touch model, and resolution is the only thing our unit was better at, with the lower-spec display covering 97.9% of the sRGB gamut while peaking at an even higher brightness of 572cd/m2. Accuracy was far superior too, with an average delta-E of 1.4: practically professional-quality. 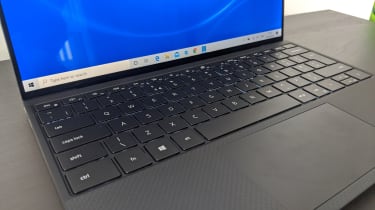 We also can’t say we actually used the touchscreen much - there’s nothing wrong with its responsiveness, the trackpad is just that good - and, considering that non-touchscreen XPS 13 models bring the weight down to 1.2kg, the best-on-paper screen configuration definitely doesn’t seem like the one worth buying. Especially if you also consider 4K’s effect on battery life; more on that later.

Hopping straight into our application benchmarks, this bells-and-whistles XPS 13 scored 89 overall, including 76 for the multitasking portion. That’s not bad at all for a skinny ultraportable, especially when it comes to multithreaded workloads - that overall figure easily bests the Huawei MateBook Pro X’s 78 and the Galaxy Book Ion’s 72.

Unfortunately, this also means it drops points from the 2019 XPS 13’s overall score of 95, possibly due to Intel’s 10th-gen chips having lower base and boost clock speeds than their 8th-gen counterparts. That said, the Lenovo Yoga C940 and Huawei MateBook 13 both broke the 100 point mark with 10th-gen CPUs, and in the Yoga C940’s case it used the same Core i7 as the XPS 13, so some thermal throttling is likely happening too.

In fairness, benchmarks only tell part of the story, and in everyday use the XPS 13 flies along. It didn’t so much as stutter the entire time we were using it, so it’ll be more than adequate for office apps and light media editing. The 1TB SSD is also very fast, managing a sequential read speed of 2,698MB/s and a sequential write speed of 1,266MB/s.

There’s little upside for battery life, though. As the 4K display is so much more power-hungry than the Full HD spec, this particular XPS 13 endured our video loop battery test for a mediocre 6hr 20mins. That’s well behind the much more premium-worthy 10hrs 50mins of the Full HD, non-touch variant. 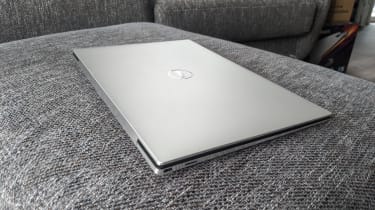 Neither can match the superb 13hrs 3mins of the Galaxy Book Ion, but this is another warning sign than the 4K screen just isn’t worth it.

Examining the XPS 13’s connections reveal another surprising regression: you only get two USB-C ports instead of the 2019 model’s three.

It is, at least, good that both USB-C ports support Thunderbolt 3, meaning that the cut port is the 2019 version’s less versatile USB 3.1 socket. And, because there’s one on each side, you can switch up which one you want to use for charging or as a monitor output, depending on your needs at the time.

There’s also a 3.5mm headphone jack on the right side and a handy microSD slot on the left. That leaves the XPS 13 better-connected than the MacBook Air, especially as Dell’s machine also includes a USB 3.0-to-USB-C adapter, so you can use at least one full-size USB device.

However, this is lacking compared to the adapter that’s bundled with the MateBook 13, which includes a full-size HDMI output as well as a USB 3.0 port and pass-through USB-C port. It would have been nice to see Dell take a similarly generous, multi-port approach to its own adapter. Moreover, the Galaxy Book Ion has the XPS 13 beat for connectivity in general: despite being 1.9mm thinner, it manages to squeeze in two full-size USB 3.0 ports, an HDMI socket, microSD slot and Thunderbolt 3 all onto the chassis itself.

The XPS 13 has a big edge on features, though. In addition to the aforementioned fingerprint sensor, there’s an extra biometric sign-in option via the camera, which supports Windows Hello facial recognition - a glaring omission from last year’s model. 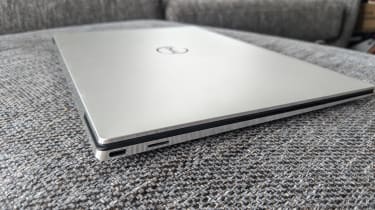 On the software side is Dell Mobile Connect. Pair up a smartphone and this lets you access contacts and media stored within, receive and respond to notifications and even mirror the phone’s screen on the XPS 13, making it usable with the trackpad and keyboard. It’s a neat tool, and handy if you’re deep in work and don’t want to be constantly switching between your phone and your laptop.

It’s compatible with both Android and iOS handsets - a far cry from, say, Huawei laptops’ phone sync features only working with Huawei and Honor phones - and although it took a couple of attempts to connect to our Google Pixel 2, after setup it was easy enough to use.

If anything, Dell needs more unique tricks like this if the XPS 13 is going to remain among the ultraportable elite. This 2020 model is largely more of the same, which a lot of the time is fine: the sleek build is exquisite, there are multiple security tools, and the keyboard and trackpad are both top quality.

Even so, at a time when the MacBook Air is returning, and the likes of Lenovo and even Huawei are also nailing the ultraportable formula, it’s not unreasonable to expect more than some mild tweaks. Especially when some of them - like the reduction in ports - are clear downgrades. The Galaxy Book Ion is a particular limelight-stealer, coming in cheaper, thinner and lighter than the XPS 13 yet beating it on battery life and connectivity.

In other words: this is a good little laptop, but for the 2021 model, we hope Dell manages to better recapture the magic that made earlier XPS 13 iterations so desirable in the first place.