The LG is light and long-lasting, but it’s compromised in several key departments 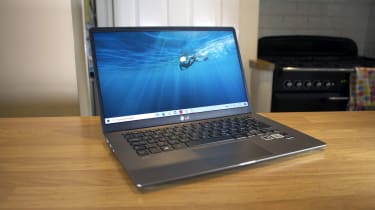 LG’s latest is called the Gram for one key reason: to draw attention to its weight. This machine tips the scales at a symbolic 999g, which makes it lighter than most rivals – an important consideration if you need a notebook that won’t weigh you down.

The 14in Gram is unsurprisingly slim and stylish, and it’s powered by Intel 10th Gen internals. And, with a price of £1,125 exc VAT, this model slots right into the mid-range ultraportable market.

The Gram is disarmingly light, which is important for a machine that may spend more time on the road than most. Get beyond the weight, though, and it’s middling. It’s 17.5mm thick for instance, but it’s more than 20mm thick when its feet are included. In 2020, that’s unremarkable.

There’s little special about the aesthetic design, either. The Gram is made from magnesium alloy that’s smooth on the outside and slightly powder-coated on the interior. It’s certainly not ugly, but it’s hardly eye-catching either.

The Gram feels like a featherweight, but there’s a downside to this – build quality. The lid is far too weak and can be flexed back and forth easily, and the area around the trackpad and keyboard has some flex to it. The underside feels stronger, but there’s still noticeable movement. 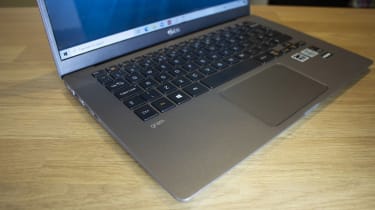 The Gram has been certified with MIL-STD-810G protocols for shock, pressure, dust ingress and high and low-temperature conditions, but it doesn’t feel sturdy. We’d recommend using a protective sleeve, which is a shame – it partially negates the Gram’s weight advantage.

The Gram doesn’t look any better when stacked up against its rivals, either: the 2020 iterations of the Dell XPS 13, Huawei MateBook X Pro and Apple MacBook Air only weigh around 250g more, and they’re all stronger and slimmer. They arguably look better, too. The Dell has its trademark carbon-fibre interior, the Huawei is available in two metallic shades and the MacBook Air is a bona fide modern classic.

Thankfully, the quiet and comfortable keyboard is much more appealing. There’s a moderate amount of travel, and the buttons feel solid and weighty, almost with the kind of tactile bump that you’d find on a mechanical desktop unit. Ultimately, the LG feels a little heavier and more solid than rivals while still offering plenty of speed. For long typing sessions, it’s very good, and you’ll only want to look elsewhere if you prefer the shallower, snappier action provided by competitors.

In some minor areas, the keyboard is more mixed. The keys are a good size, with a smart font and a neat concave shape, but the white backlighting is only available in two levels.

Meanwhile, the trackpad has a smooth, accurate surface and two fast buttons. The overall build quality of the machine has an impact here, though – the whole pad pushes down when you’re clicking the buttons. It’s usable, but not robust. 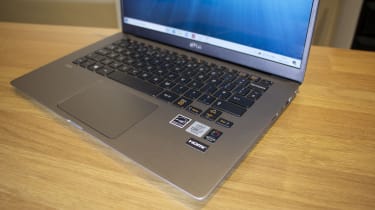 The 14in display uses a Full HD resolution, which is ample for mainstream work. Quality levels are reasonable, too; the 334cd/m2 brightness level is good enough for indoor use but isn’t bright enough for the great outdoors. It’s paired with a decent black point of 0.26cd/m2, and those figures create a contrast ratio of 1,285:1. That respectable figure helps this screen create vibrant bright colours and reasonable depth in darker areas. The Delta E of 2.31 is good, too – just below the point at which human eyes can detect deviations.

There are weaknesses, though. The colour temperature of 7,320K is cool and it means the screen looks a little washed-out, and the Gram’s display rendered a good but not outstanding 94.9% of the sRGB colour gamut. Uniformity in the bottom-left corner is poor though – the brightness dips by 18% in this area.

The Gram’s display is good enough for most work tasks, including mainstream photo-tweaking. More quality can be found elsewhere, though. The Dell XPS’ Full HD variant is brighter, with better colour accuracy, while the Apple and Huawei machines are both brighter and sharper.

The Gram is powered by an Intel Core i7-1065G7. It’s a new, low-power 10th Gen chip with four Hyper-Threaded cores, and it has a base speed of 1.3GHz alongside theoretical single- and all-core Turbo speeds of 3.3GHz and 3.9GHz. The specification is rounded out with 16GB of memory, and a 512GB SSD with superb read and write speeds of 3474MB/s and 2223MB/s.

When it comes to graphics, this machine uses Intel’s integrated GPU, so it’s restricted to media duties, casual games and light photo-editing. It’s solid hardware, though – the Dell and Apple machines are virtually identical, while the Huawei has a slightly older Core i7 chip alongside modest Nvidia graphics. 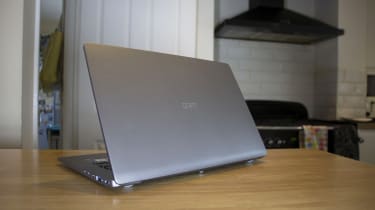 LG’s machine compares well on paper, but its performance is underwhelming. In our multi-tasking test it scored 57, and it returned a lacklustre overall benchmark score of 73. Dell’s machine scored 76 and 89 in the same tests, and even the Huawei and its older CPU scored 78. Those benchmarks were measured in the LG’s default performance mode, but opting for peak performance only improved the Gram’s score to 76.

The Gram does compare well to the MacBook in Geekbench 5. We reviewed Apple’s Core i5 model, but the LG scored 1,255 and 3,291 in Geekbench 5, and anecdotal evidence suggests that those scores are a little quicker than Apple’s Core i7-based machine.

The underwhelming performance can be explained by examining the chip. In the single-threaded image-editing test the processor occasionally peaked at its single-core turbo speed of 3.9GHz, but it was often far slower and its cores hit peak temperatures beyond 90°C – far too hot. In the tougher video-editing and multi-tasking benchmarks the temperatures remained toasty, and the speeds settled at around 2.3GHz and often dipped below 2GHz.

The relative lack of speed won’t cause issues in day-to-day tasks – for web-browsing and running Office applications the muzzled CPU is quick enough. If you want to push the components further in photo-editing software, database tools and other tougher apps, other machines are better.

Happily though, the reduced CPU speed does mean that the Gram is quiet – fan noise is barely audible, even when the components are stressed. Battery life is excellent, too. In our video playback test, the LG lasted for 14 hours and six minutes, which is stunning – twice as good as rivals and easily enough to handle dawn until dusk. Pushing the components and brightening the screen will limit that lifespan, but you’ll still easily get ten hours of use. 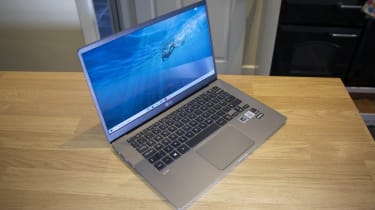 The Gram serves up two full-size USB 3.1 ports and a Type-C connector that supports power delivery, display output and Thunderbolt 3. Elsewhere, there’s an audio jack, an HDMI port and a microSD card slot, and an Ethernet adapter is included.

It’s good connectivity, especially compared to other machines in the same bracket. The Dell and Apple machines have more USB Type-C ports but they lack HDMI and full-size USB, and the Huawei has no card slot.

Elsewhere, there’s a fingerprint reader in the power button, a Kensington lock slot and TPM 2.0, and dual-band WiFi 6. Sadly the webcam doesn’t support Windows Hello or IR, and there’s no privacy shutter. Don’t expect much from the speakers, either. They’re fine for casual media duties, but they lack mid-range clout and the top-end is a bit tinny.

The Gram makes plenty of noise about its 999g weight, but this sub-kilogram achievement feels like a gimmick that hinders this machine in several key departments.

It’s light and it has excellent battery life, but the Gram’s build quality is a step behind the competition and it affects the trackpad – which undermines the good keyboard. Under the hood, the CPU is throttled, and screen quality is reasonable, but bettered elsewhere.

Rivals from Dell, Apple and Huawei range in price from £1,333 exc VAT to £1,416 exc VAT, and that extra outlay delivers better screens, more CPU power and sturdier, slimmer and better-looking designs. Their keyboards and trackpads are arguably superior too, depending on your preferences.

The Gram is solid if you need a lightweight, long-lasting machine, and it’s certainly not bad in any respect – it’s a fine everyday ultraportable. However, more power and quality can be found elsewhere for a little more cash.