A compact laptop that packs in a staggering amount of power, but we’re not fans of its connectivity 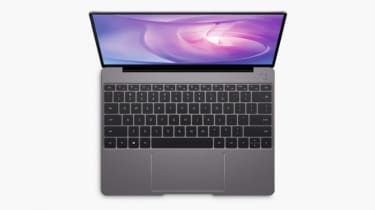 If this laptop was a boxer, it would be short, lean and wiry. It packs a lot of power, but that’s only obvious when you pitch it into battle. The muscle comes courtesy of Intel’s tenth-generation Core i7-10510U processor, and it’s got all the right components in its corner thanks to discrete Nvidia graphics, a fast M.2 SSD and a tasty 16GB of RAM.

Considering the MateBook’s slight frame, that’s quite a lineup. While most 13in laptops are more than 300mm wide, it measures 286mm. It’s also a slim 14.9mm.

Huawei still finds room for one of the best cooling systems we’ve seen in an ultraportable, helping to make this one of the fastest laptops we’ve tested with a Core i7-10510U. Just compare it to Huawei’s own MateBook X Pro - a much more expensive and supposedly  more capable laptop - which the MateBook 13’s overall benchmark score of 104 handily surpassed by 25%. The MateBook 13 also kept hurtling along at a turbo clock speed of between 4GHz and 4.8GHz for several minutes for added power.

The downside is fan noise, but this appears during particularly tough tasks rather than general use. Battery life is capable, if not outstanding; a score of 8hrs 15mins in our tests is enough to get you through a workday, but not much beyond that without a quick recharge.

Huawei makes good use of the GeForce MX250 graphics though, which sit a notch above Intel and AMD’s integrated offerings. For example, Metro: Last Light returned a 44.9fps average at 1080p and Dirt: Showdown 89.6fps. This extra horsepower means you can enjoy many games at the screen’s resolution of 2,160 x 1,440.

As mental arithmeticians will have spotted, that translates into a Surface Pro-style 3:2 aspect ratio, rather than the 16:9 of most screens. The extra pixels also means more density than a Full HD (1,920 x 1,080) panel, which in turn makes it easier to view two windows side by side on the screen. It’s touchscreen too, and there’s even enough colour accuracy for web designers, with 90.4% coverage of the sRGB gamut with an average Delta E of 0.94; not print designers, though, as its Adobe RGB coverage is 62.9%. 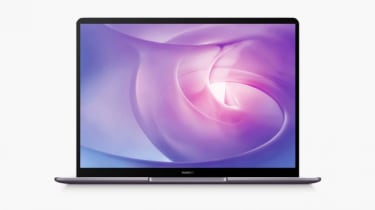 Despite a relatively flat 990:1 contrast ratio, don’t be put off if you’re looking for an after-hours entertainment system. It coped well with dark, brooding scenes, and a decent pair of speakers mean you don’t need to plug in headphones. Drums lose something in translation, and you wouldn’t want to listen to heavy rock on it, but the same could be said for most laptop speakers.

Aside from a combo 3.5mm jack, the only two physical connectors here are USB-C, with one on either side. Huawei bundles an adapter with HDMI, USB and VGA connectors, but this doesn’t make up for the annoyance that the left USB-C port only supports charging and data transfer, while the right port is for data transfer alone. If you want to connect a monitor, you’ll need to fish out that adapter.

We’re also disappointed to see 802.11ac wireless rather than Wi-Fi 6, with the only good news being for owners of recent Huawei and Honor phones: thanks to Huawei Share, you can tap your phone against the sticker below the keyboard and then quickly share files between phone and laptop.

The unfortunate side effect of this is the Huawei Share sticker itself, which spoils this laptop’s minimalist lines. You can remove it, but Share will no longer work. A huge trackpad sits to the left, and it’s matched by a backlit keyboard with large keys. It isn’t our favourite to type on, with little feedback, but it’s quiet at least.

Huawei builds a fingerprint reader into the power button, but note that the webcam squeezed into the top bezel doesn’t support Windows Hello. It takes terrible photos, but its video is passable for Zoom.

Should you buy the MateBook 13? It certainly excels for speed, and Huawei Share sticker aside, it looks great. That said, if you’re paying this much you should demand a better keyboard and USB-C ports that actually work like everyone else’s. It’s a nice laptop, but it lacks the killer punch.