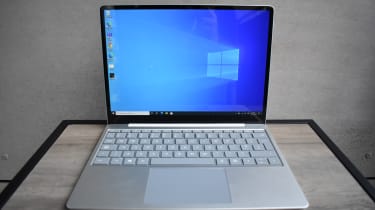 It’s Go time once again for Microsoft. After the excellent Surface Go 2, a smaller and more affordable alternative to the main Surface Pro series, the company has applied the same thinking to its Surface Laptop line. The result is the Surface Laptop Go, Microsoft’s smallest clamshell laptop to date - albeit one that inherits many qualities of its parent products.

Be warned, though, that whereas the Surface Go 2 was essentially just a scaled-down Surface Pro, the Surface Laptop Go makes some deeper cuts.

Second, there’s no facial recognition sensor for use with Windows Hello. The good news is that this is replaced by a fingerprint sensor integrated with the power button - the first time Microsoft has featured such a sensor on any of its laptops -  but it does mean that the only camera is a simple webcam, the video quality of which is underwhelming.

Thankfully, there’s plenty else about this laptop that meets the high standards set by previous Surface Laptops. Despite the plastic, it’s incredibly sturdy throughout - even the hinge is strong - and there’s almost no flex to the metal-clad screen. 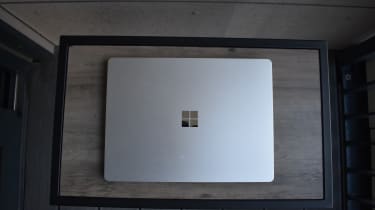 Reasonably thin bezels also contribute to the Surface Laptop Go’s appealing lack of bulk. The whole thing weighs a mere 1.1kg, and even its power brick is smaller than most, so you’ll have no trouble taking it out and about.

The speakers aren’t bad, either. That’s not to say they’re particularly good, as the upwards-firing drivers definitely lack bass, but their clarity is fine and you can crank up the volume without distortion.

In a recent briefing, Microsoft described the Surface Laptop Go as having a “full-sized” keyboard - which sounded fanciful given its compact 12.4in screen size and the inevitable chassis-shrinking that would result.

Fortunately, while the keyboard is very slightly compressed - and lacking any backlighting, which is a shame -  it’s not going to take much adjustment to get comfortable with: we compared it to the 13.3in Huawei MateBook 13’s keyboard. and it’s only about a centimetre and a half narrower.

In any case, the only actual key we’d say is undersized is Backspace. Otherwise, the experience of hammering out paragraphs feels pleasantly close to that of any grown-up Surface Laptop, thanks also in part to the firm switch mechanism. 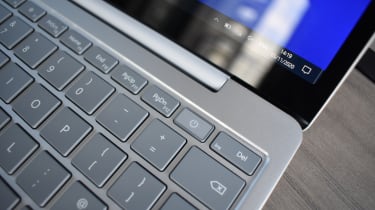 Credit is due to the trackpad too, which overcomes some cost-cutting - it’s made from plastic, not glass - to feel as smooth and responsive as anything else on the market.

At 12.4in diagonally, the Surface Laptop Go’s touch-enabled screen is small even by lightweight laptop standards, and its 1,536x1,024 resolution isn’t even Full HD.

Why, then, is using this display so comfortable? For one thing, a lower resolution simply doesn’t look as fuzzy if the screen is smaller, and as such the Surface Laptop Go’s pixel density of 148ppi isn’t really noticeably worse than the 166ppi of a typical 1080p, 13.3in laptop screen. It might seem to lack definition if you’re used to laptops with Quad HD screens and above, but frankly, we had no issues with its sharpness.

As per usual with Surface Laptops, Microsoft has also chosen a 3:2 aspect ratio instead of the usual 16:9, which has the positive effect of making the display seem taller (despite losing a bit of width in the process). The end result is that although it’s less suitable for working on two applications side-by-side, you can fit more page text or vertical spreadsheet cells onto this screen without needing to scroll down.

Then there’s the fact that it’s just a nice-looking screen in general. sRGB gamut coverage comes in at a high 94.4%, and with a contrast ratio of 1,029:1 and peak brightness of 329cd/m2, everything is nice and vibrant. Not to the point of oversaturation, either: we measured average delta-E at 1.52, which is close to that of a professional-quality monitor. 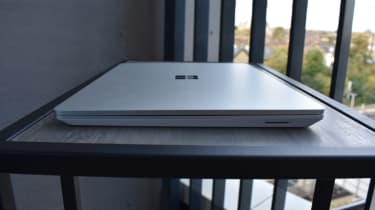 Despite this, one thing the resolution is definitely too low for is serious creative work, so stick with one of the standard Surface Laptops if you’re going to be editing photos or videos.

We tested the top model in the special “For Business” range, containing an Intel Core i5-1035G1 processor, 256GB SSD and 16GB of RAM. There are several cheaper specs in both For Business and consumer flavours, and while the former are significantly more expensive, taking the commercial route means the Surface Laptop Go will come with Windows 10 Pro instead of Windows 10 S. This also provides access to a useful-sounding replacement service where you can receive a new Surface Laptop Go without needing to send in your defective model.

Anyway, back to the hardware. In our 4K benchmarks, the Surface Laptop Go scored 70 overall, which means it falls behind the best premium ultraportables. Then again, it’s no slouch either, edging past the latest Apple MacBook Air (which scored 68 overall) and absolutely hammering the Surface Go 2, which only managed 25.

In everyday use, it’s tough to tell the difference between this and the Core i5 versions of the Surface Laptop 3. Applications open instantly, and there’s no sense of sluggishness when juggling multiple Chrome tabs.

The only disappointment, then, is storage speed. Specifically writes: using AS SSD, we clocked the SSD’s sequential write speed at 437MB/sec, well behind its sequential read speed of 1,630MB/sec. This won’t have as much of an impact on how fast the laptop feels as a slow read speed would, but it’s a little disappointing nonetheless. 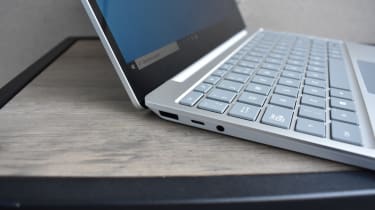 The Surface Laptop Go’s longevity is decent, if surprisingly similar to that of the 13.5in Surface Laptop 3. The newer device lasted for 8hrs 29mins in our video loop test, which is very close to the 8hrs 48mins of its bigger brother; it’s interesting that the Surface Laptop Go’s battery size has shrunk almost perfectly proportionately to the lower power demands of its smaller, lower-resolution display and removed keyboard backlight.

This is also a modest laptop in terms of ports: besides the proprietary power connector, there’s only a single USB 3.1 port, USB-C port and 3.5mm audio jack apiece on the left edge.

In some ways, though, this selection is better than it sounds. Microsoft could have easily ditched the full-sized USB port on the grounds that this was a smaller, cheaper Surface Laptop, yet here it is in all its usefulness. The USB-C port, too, might lack full Thunderbolt 3 compatibility, but is still versatile enough to output video as well as act as an alternative charging port. Wireless connectivity is also well up to standard, with both 802.11ax Wi-Fi and Bluetooth 5.0 onboard.

The fingerprint sensor is another nice feature. We couldn’t get it to log us in from a cold boot, like some laptop sensors can, but it’s still easier to lay a finger on the power button twice than it is to press then type in a password. Surprisingly, we didn’t miss facial recognition that much, either.

We think Microsoft can chalk this up as another successful downsizing: although the Surface Laptop Go’s cutbacks are more frequently felt than on the Surface Go 2, it’s still clearly a laptop that’s been crafted with care.

That said, it’s important not to get carried away thinking the Surface Laptop Go is a budget masterpiece; with this model’s For Business bonuses, it’s only a few notes less expensive than a mid-spec Surface Laptop 3. Personally, we’d be more tempted by the next model down from this, which is identical save for having 8GB of RAM, yet represents a hefty £168 saving before VAT.