A pure business laptop with a great screen, but it’s expensive and underwhelming elsewhere 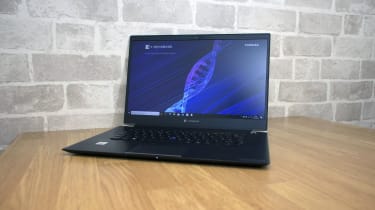 It’s been a hectic time for Toshiba’s laptop business, which was partially purchased by Sharp in 2018, renamed to Dynabook, and then bought outright by Sharp in August. Now that’s all out of the way, this organisation is getting its focus back – and producing laptops like the £1,419 exc VAT Portégé X50-G-10V.

The X50 is made from black magnesium alloy, and it has subtle design throughout – there’s a metallic logo and hinges, but that’s it in terms of visual flourishes. It’s an unfussy corporate notebook.

The X50’s thickness of 18mm is decent and the weight of 1.42kg is impressive, and this machine has been certified with MIL-STD-810G testing for drops, spills and impacts, but build quality remains a concern. There’s far too much movement in the underside – pressing the aluminium flexes the entire base. There’s too much flex in the screen as well, and the area around the trackpad rattles somewhat. A sleeve would be a great idea if you’re taking this laptop outside.

It’s slim, light and subtle, but the Portégé doesn’t compare well to rivals. The 16in Honor MagicBook Pro costs just £708 exc VAT – it’s heavier than the X50, but it’s slimmer and stronger. The 14in Acer TravelMate P6 costs £1,083 exc VAT, and it’s lighter, slimmer and better-looking than the Portégé, although it only has mediocre build quality. The Lenovo ThinkPad L14 costs £892 exc VAT if you improve its processor. It’s heavier than the Portégé, but it has classic ThinkPad design and a more robust chassis.

The Dynabook’s keyboard has serious layout issues. It doesn’t have a numberpad despite the swathes of free space, and on a machine of this size, there’s no need for tiny function keys, a narrow space bar and short cursor buttons. The buttons have reasonable travel, and their typing action is fast and consistent enough for daily office use, but the bouncy base means the keyboard feels soft, rather than crisp and satisfying. 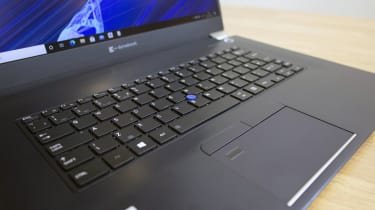 The trackpad isn’t much better; it’s small and sits close to the front of the laptop. It’s got two in-built buttons, but they’re soft, and although the Dynabook has a trackpoint in the keyboard and two accompanying buttons, the trackpoint isn’t tall enough – it doesn’t stand proud of the keyboard at all. Its two discrete buttons are fine, but ThinkPads include three buttons, and all three of the Portégé’s rivals are better ergonomically.

Things start to look up with the display, though. The Dynabook has a 15.6in IPS panel that uses IGZO technology, which should improve power consumption. The 1080p resolution is fine for everyday workloads, and the matte finish means bright lights aren’t an issue. The panel’s peak brightness of 521cd/m2 is huge, and it means this display works well indoors and outside. It’s paired with a contrast level of 1,532:1, which is great – it delivers punchy, vibrant colours and loads of depth. That figure is combined with a colour temperature of 6,663K and a Delta E of 1.16 – two more great results that mean colours are extremely accurate.

The display maintained its accuracy and contrast after we’d halved the brightness, and uniformity is reasonable – the backlight deviated by 11% in the corners but that’s not enough to be problematic. The panel rounded out its solid results with a good 96% coverage level in the sRGB colour gamut. The only issue here is the panel’s lack of ability in the Adobe RGB and DCI-P3 colour gamuts, which precludes working in those spaces.

The Portégé’s display is its best asset. It has better quality than any rival, and it’s easily good enough for photo-editing and colour-sensitive work in the sRGB colour space.

The Dynabook is underpinned by a low-power Core i7-10510U processor, which has four Hyper-Threaded cores and base and boost speeds of 1.8GHz and 4.9GHz – but an older Intel Comet Lake architecture. Both the Acer TravelMate and the Lenovo offer the same processor for significantly lower prices. The rest of the specification includes 16GB of DDR4 memory, a 512GB Samsung PM981 SSD and Intel’s integrated UHD Graphics 620 chipset. 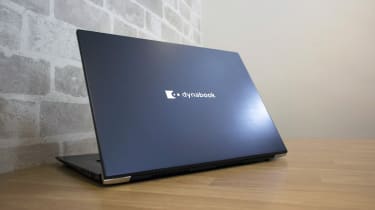 Intel’s single-threaded strength helped the Dynabook score 121 in the image-editing test, and it returned scores of 88 and 76 in the video-editing and multi-tasking benchmarks, with an overall score of 88. In Geekbench 5’s single- and multi-core tests, it scored 1,152 and 3,204 points.

In terms of everyday computing, that’s fine. There’s enough power here to handle Office apps, mainstream photo-editing and web-browsers simultaneously. The SSD plays its part, too – its read and write speeds of 3,339MB/sec and 2,965MB/sec are great. Thermally, it’s solid: the components never overheat, the chassis is cool and fan noise is minimal.

In the wider market, though, the Portégé isn’t impressive, because this 10th Gen silicon is quickly being superseded. Newer low-power parts like the i7-1065G7 and the Tiger Lake-touting i7-1165G7 are marginally quicker in single-threaded tests and more than 1,500 points better in Geekbench’s multi-core benchmark. Then there are AMD’s chips: low-power parts like the Ryzen 7 4700U have scored 178 in our benchmarks, and the MagicBook’s full-power Ryzen 5 4600H scored 229. Those AMD chips are better graphically, too: the Dynabook’s Intel chip scored 4,241 in 3D Mark Sky Diver, but AMD’s integrated GPUs top 10,000 points.

The Dynabook’s older Core i7 part looks even worse when pricing is considered. The Portégé costs £1,419 exc VAT, but the Acer and Lenovo are hundreds cheaper. The AMD-powered MagicBook costs £708 exc VAT. Machines with better AMD CPUs and 11th Gen Intel chips are available for around £1,000 exc VAT or less.

To make matters worse, this machine also has underwhelming battery life. In our video playback test, the Dynabook lasted for 7hrs 43mins. That’s more than an hour behind the Honor and half as good as the Acer. This machine will barely make it through a workday – and it won’t handle the commute. 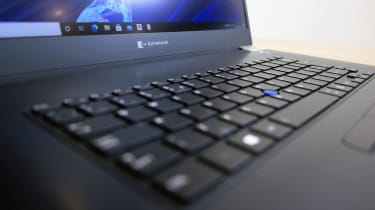 The Portégé has a good slate of business features, which is unsurprising considering Dynabook’s pedigree. Internal connectivity is handled by dual-band WiFi 6 and Bluetooth 5.1, and there’s a fingerprint reader, and Windows Hello-capable webcam with a privacy shutter. Security is enhanced with TPM 2.0 and a Kensington lock slot, and on the right-hand side is a smart-card reader, a microSD card slot, an HDMI port and two USB 3.2 Gen 2 Type-C ports that support Thunderbolt 3 and DisplayPort. One of those ports charges the laptop, and they can both also charge external devices and offer between 5V – 20V and 15W – 65W of power. The Portégé has a decent software utility, with plenty of system information, diagnostic tools and options to manage power consumption, boot and port options and devices. There’s bloatware too though – Amazon, Spotify, Winzip and a few other tools were already installed.

It’s a good slate of features, but the Portégé is not flawless. Its two full-size USB ports only use USB 3.1 Gen 1, which means they top out at 5GB/sec of bandwidth. This machine doesn’t have Gigabit Ethernet, either. Its speakers are loud, with a distractingly muddy mid-range. A version of the X50 with a SIM card slot is available, but it costs £1,539 exc VAT.

The Acer and Lenovo machines are both closer to the Portégé in terms of features, and the Honor is noticeably worse, with an awkward webcam, no card slots and no WiFi 6.

The X50 costs £1,419 exc VAT, but it’s difficult to see where the money has been spent. The screen is superb, and the Portégé is a solid thermal performer – but in every other key department any gains are immediately undermined. 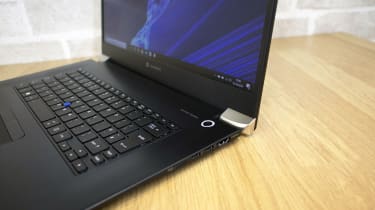 The processor is fine for everyday computing, but it’s outpaced by newer chips in cheaper machines. The keyboard is fine for mainstream workloads but it has layout issues and underwhelming mouse options. The battery is disappointing. The chassis is slim, light and has MIL-STD-810G certification, but it has poor build quality and dated design. All of these issues are rectified in cheaper machines.

The Portégé isn’t a particularly impressive or reassuring business notebook. It’s light and has good features, but you can easily find similar features, better design and more power elsewhere for less.