The power of the iPhone 11 in the body of an SE, but for an un-Apple-like price

Apple has launched the second-generation of its budget iPhone SE smartphone, with a few components you'd only expect to find on its more premium devices.

The new SE, available from 24 April, will come with the same A13 Bionic processor as the iPhone 11, which currently costs £729 on the Apple store. It will also include lenses and camera software from the company's more premium devices, but for the relatively modest price of £419.

The smartphone has taken design cues from the iPhone 8, complete with a rounded chassis and a physical home button. It comes in three simple colours: white, black and the charitable red. It has a 4.7in HD display with Haptic Touch and a glass and aluminium body.

Apple called the first iPhone SE "a hit with many customers" based on its combination of high-end performance, small size, and affordable price. The company is confident the same will be true of the newer model as it includes more premium components.

Along with the suped-up processor, the SE houses a 12MP f/1.8 aperture lens which is powered by a neural engine on the A13 chip. This is equivalent to the camera system on the iPhone XR that offers a range of smart controls and effects.

Despite being a budget handset, Apple hasn't cut costs on security. The home button is a fingerprint sensor with the Touch ID and this also includes a Secure Enclave that protects user's fingerprint data. There is also a feature called 'Intelligent Tracking Prevention' which prevents advertisers from tracking users from site to site on Safari. 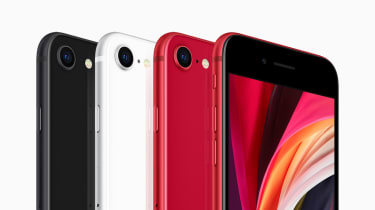