Philips Brilliance 439P9H review: Huge and imposing - but is it any good?

Great quality, features and size, but it’s not necessarily the biggest or the best option 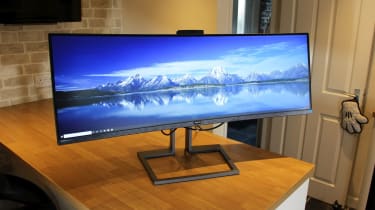 The Philips Brilliance 439P9H is a widescreen display that aims to improve productivity by offering a vast amount of space – handy if you work with loads of windows or with huge spreadsheets.

The £667 exc VAT price sounds steep, but it’s not the priciest panel we’ve seen recently – and it’s not the largest widescreen we’ve reviewed, either.

The Philips looks good, with a smart, minimal stand and slim bezels, and it’s robust. It has decent versatility: you get 130mm of height adjustment, tilting and swiveling movement and 100mm VESA compatibility. It’s heavy, though, at 14.4kg, and it’s 1058mm wide – so make sure you have a sturdy desk and plenty of space.

As the name suggests, the Brilliance 439P9H has a 43in diagonal. It’s huge, and it’s paired with a resolution of 3,840 x 1,200. This screen has the same number of horizontal pixels as a 4K panel, and more vertical pixels than conventional 1080p screens – which means more vertical space.

This 32:10 screen has a conventional 1,800R curve that improves immersion and ease of use – because you’re not straining to see the corners. It’s the equivalent of having two 16:10 panels side-by-side, and Philips says the 439P9H is designed to replace a dual-screen setup. 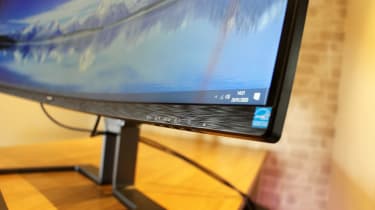 There are certainly pros and cons: having a single widescreen display eliminates bezels and cables, and it means you have better uniformity than two screens. The huge size is also a boon for where extra width is welcome. However, having one display can make it trickier to snap windows and applications around, which may negatively impact your workflow.

The 439P9H’s combination of 43in diagonal and 3,840 x 1,200 resolution delivers a density level of 94ppi. That’s reasonable: sharp enough for photo and video work, and with plenty of on-screen real estate for using multiple windows or wide applications.

Underneath the huge size and resolution, the 439P9H uses VA technology alongside 10-bit colour, and it has AMD FreeSync that peaks at 100Hz. The inclusion of VA technology is interesting: it lowers cost when compared to IPS and lends itself to top-notch contrast, but IPS panels tend to have better colours.

The 439P9H supports DisplayHDR 400, but that’s nothing special: it’s an entry-level standard that only requires a burst brightness level of 400cd/m2 and a black point of 0.1cd/m2. Those modest figures only deliver a marginal boost to HDR content – don’t expect any transformations. 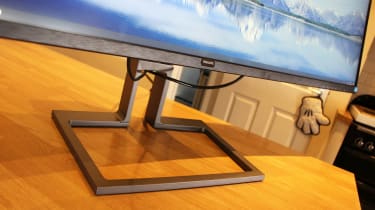 The 439P9H has a better specification than the 499P9H, which also used VA technology but only had 8-bit colour and its FreeSync topped out at 70Hz. The smaller Asus ProArt PA34VC is better on paper, with an IPS display, 10-bit colour and 100Hz FreeSync.

The 439P9H has loads of helpful features. It has an integrated KVM switch, so you can control two PCs or laptops using a single keyboard and mouse, and it has a Windows Hello webcam that can be hidden in the top bezel - both exceedingly handy for businesses.

There’s also a slew of ports on offer, including two USB-C 3.2 ports that deliver power – one with 75W of electricity and one with 15W – with one of those functioning as the upstream port. It has four full-size USB 3.2 ports, with one also able to fast-charge devices. There’s Gigabit Ethernet, two DisplayPort 1.4 sockets and a sole HDMI 2.0b connection. You also get two 5W speakers that provide enough punch and clarity for casual media use and video calls.

That’s an extremely well-rounded selection of inputs, and a better one than both the larger Philips and the Asus, although it remains irritating that all of this panel’s ports are on the rear and face downwards – it makes them tricky to reach.

Thankfully, the standard Philips OSD is sensibly organised and very fast, which is key for work. It’s navigated using a row of snappy buttons beneath the bottom bezel. 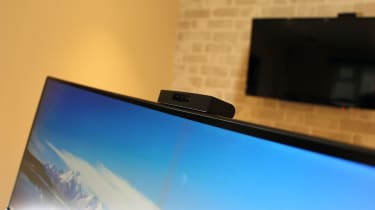 At default settings, the 439P9H delivers a brightness level of 400cd/m2 and a black level of 0.18cd/m2. Those figures create a contrast ratio of 2,222:1 – a great figure that squeaks past the larger Philips and easily beats the Asus. That great contrast means that the 439P9H has huge vibrancy and punch, along with a lack of noticeable banding and plenty of pleasing subtlety on show.

That’s a good start, but the 439P9H is a little weaker when it comes to colours. Its Delta E figure of 2.27 and colour temperature of 6,403K are good, which means this screen delivers decent accuracy - but it’s easy to find better results elsewhere.

Happily, the Philips’ results are improved in sRGB mode: with this option selected the screen maintained its contrast level and improved its Delta E and colour temperature figures to 1.25 and 6,469K. The 439P9H rendered a reasonable 97.9% of the sRGB gamut, which is also good for mainstream colour work, but only handled 79.4% of the Adobe RGB gamut and 86.9% of the DCI-P3 gamut.

Those two latter results are not good enough to enable working professionally in either colour space For mainstream photo or video work that uses the sRGB colour gamut, though, these results are easily good enough.

The 439P9H’s colour results are very similar to the Asus display. However, the 439P9H’s colour quality can’t match the larger Philips screen. That monitor had a better Delta E and excellent colour temperature alongside a slightly better sRGB coverage level, although it still couldn’t handle the Adobe RGB or DCI-P3 colour gamuts. 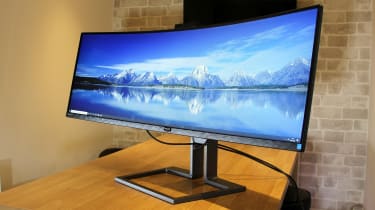 At default, the Philips’ is set to run at 60% brightness. Ramping that figure up to 100% increases the backlight strength to 529cd/m2 while maintaining contrast and colour levels. Those levels were also maintained with the screen brightness reduced to more manageable levels. The Philips has enough backlight strength to meet its HDR obligations, but its black level can’t reach the depths demanded by DisplayHDR 400. Activating HDR on this screen will only deliver a tiny improvement, so no-one should buy this screen on the strength of its HDR options.

Uniformity is an issue, too. Along the left-hand edge the 439P9H lost up to 35% of its backlight strength, and it lost up to 28% on the right-hand edge. Along the top and bottom edges 23% disappeared. It’s not unusual for widescreens to have uniformity issues, but the 439P9H’s results are notable: worse than both rivals, and with high enough deviations that dimmer areas are sometimes visible in the corners of the display.

The 439P9H has several big advantages. The design, for starters: this screen’s width is a huge boon for lots of situations, and the Philips has great features, from its USB and Ethernet connectivity to its KVM switch and pop-up webcam.

The 439P9H serves up impressive contrast and good colour in its sRGB mode, too – it’s better than the pricey Asus and virtually as good as the larger Philips. 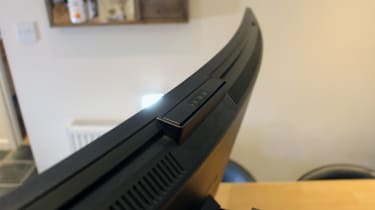 This screen does have its downsides, though. Its rivals are sharper, and the larger Philips has a higher resolution and slightly better colours. The colours and contrast are good, but the uniformity issues mean that this screen won’t always cope with colour-sensitive tasks in the sRGB colour space, and it’s not able to handle Adobe RGB or DCI-P3 work either.

The Philips Brilliance 439P9H is good if you need loads of horizontal space and if you don’t do too much colour-sensitive work. However, keep the larger 499P9H on your radar – it’s only a little more expensive despite the higher size and resolution