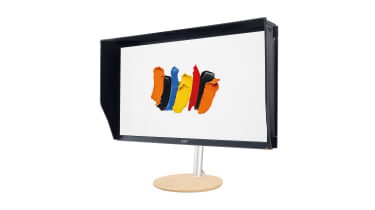 The ConceptD range doesn’t just span articulated laptops and wood-topped desktops like the ConceptD 500. Monitors are another part of Acer’s attack on the professional market; hence we have the ConceptD CP3271KP, one of the company’s most highly specced desktop screens outside of the gaming-focused Predator series.

It’s a 27in, 4K (3,840 x 2,160) IPS panel, and while it’s extremely expensive for its size, Acer is at least promising HDR 400 compatibility and professional colour accuracy. Like the ConceptD 500, it also appears to have been designed for those who want to bring a touch of class to their workspaces: there’s a similar faux wood ﬁnish on the circular base, and the thin metal stalk of a stand is certainly nicer to look at than any fat pillar of black plastic.

More importantly, it’s highly adjustable. There’s –5° to 35° of tilt adjustment and up to 180mm of height adjustment, and it rotates as well – though peculiarly, the entire base moves on a spinning platter, rather than just having the screen spin on an axle. It’s functional, however, and the only missing thing is the ability to ﬂip the whole screen 90° to use it in portrait mode. It can, however, be VESA-mounted using the supplied plate and screws.

We’d recommend doing that if it’s a viable option, as there is one design ﬂaw with the stand: it wobbles. Not to the point where you can shake the screen just by, say, typing on a keyboard or tapping on the desk, but whenever we wanted to make a rotation of tilt adjustment it deﬁnitely felt a bit looser than we’d expect for £1,000. 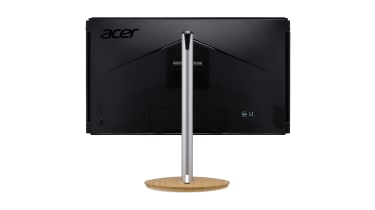 Most of these are hidden on the rear, although the USB3.1 ports are on the left edge for easier access. Some 4W speakers are included too, and they’re capable enough for Windows sounds and voice calls. You should invest in some desktop speakers for working with music and video, however.

Also on the back is the power button, three shortcut buttons and a joystick, which can be used to navigate the CP3271KP’s pleasantly straightforward onscreen display (OSD). We found it annoyingly easy to hit the power button when aiming for the top shortcut button – they’re the same size and shape – but that’s about it for faults, as the joystick works well and the OSD itself strikes a great balance between user-friendliness and depth of features. This includes multiple image proﬁles, and the ability to create a custom proﬁle yourself.

We began our colourimeter tests with everything on the standard default settings, with the exception of brightness being set to maximum. The CP3271KP very quickly impressed, managing 99.6% sRGB colour gamut coverage, a 1,068:1 contrast ratio and a peak brightness of 469.6cd/m2 – enough both to see off any glare that the hood and matte panel ﬁnish might have let through, and to fulﬁl the promise of HDR 400.

The only potential issue was the average delta-E of 2.78, which isn’t bad in general terms but isn’t quite low enough to achieve photo-editing-quality colour accuracy. This lowered slightly to 2.72 once we enabled the HDR 400 mode, while brightness, gamut coverage and contrast all rose slightly, to 476cd/m2, 99.8% and 1,073:1 respectively.

This mode also adds a very subtle sharpening ﬁlter, which can be toggled manually. Finally, we tried the sRGB proﬁle, which ﬁnally got average delta-E down to a professional-grade 1.33. However, it bizarrely lowered sRGB gamut coverage to 91.5%, while also dropping contrast slightly to 1,050:1. Peak brightness was also lower, at 465.1cd/m2, but that’s still a good result. 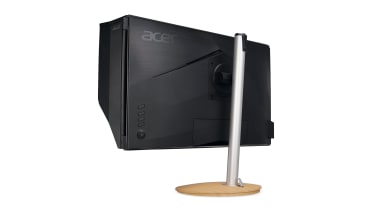 It’s unfortunate that you essentially have to choose between wider gamut coverage or higher accuracy; these should, rightfully, be two sides of the same coin. The NEC MultiSync EA271U makes a much more successful attempt at balancing the two, with 97% coverage and a delta-E of just 0.5. It’s cheaper, too, at £800.

What makes this unfortunate is that Acer’s monitor performs so well outside of this one contradiction. It even has a smooth 120Hz refresh rate and Nvidia G-Sync support, though the latter won’t be as commonly useful here as on a gaming monitor. It can also overclock to 144Hz, but this requires jumping through a few too many hoops: it only works with AMD graphics cards, so G-Sync must be turned off in the process, and you need to connect with two DisplayPort cables at a time.

Such weirdness can be overlooked when performance, adjustability and connectivity all meet high standards, and the CP3271KP is generally a strong showing from a manufacturer with relatively little experience making top-end pro monitors. The MultiSync EA271U, however, is simply better value.