I hate how much I love my second monitor

Having two monitors may seem like an extravagant luxury – but once you try it, you’ll never go back 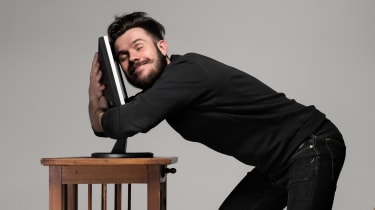 If you listen to the IT Pro Podcast, you’ll likely have heard me talking about my new gaming PC. While I deeply love my large, beautiful son, the process of switching over to a desktop PC after several years of using a laptop as my primary device left me in a bit of a pickle for a week or so.

My home working setup includes an external monitor, mouse and keyboard, all of which were previously connected via an external USB-C docking station to my trusty Matebook X Pro, which sat on a stand acting as my second monitor. You see, I fall into the rather embarrassingly-named category of the ‘power user’; I (just about) know my way around a command line terminal, I have familiarised myself with the arcane sorcery of keyboard shortcuts, and asking me to use a single monitor to get things done is like asking me to play Total Wipeout blindfolded and using only one leg.

Unfortunately, this was the situation I found myself in when I made the switch to desktop. I spent a week using only a single external monitor while I waited for my second display to arrive, and it brought into sharp focus just how much I rely on having two screens. Like a phantom limb, I kept looking for a secondary display that wasn’t there as muscle memory sent my cursor hopelessly ramming into the boundaries of my single, sad screen.

My second monitor arrived along with a record heatwave that has seen temperatures soaring to more than 30 degrees, and while I could have taken my laptop and worked outside in my garden, the thought of tearing myself away from all that screen space and going back to a single 14in display was just too much to bear.

Now, you might think that this is the height of first-world problems and a sad indictment of someone who has become utterly dependent on technology – and you would be entirely right. Having multiple monitors and the maximum possible amount of screen real estate does make me more productive, but it’s partly as a result of my terminally short attention span.

I like to use my main monitor for stuff that I’m working on directly; for example, if I’m writing an article, one half of the screen will be dedicated to research, while the other half will have the document I’m working on in it. So far, so good. The second screen, meanwhile, I keep off to one side, and that has all of my admin and communication apps. This is where my to do list, email, Slack, Twitter, LinkedIn and Spotify generally live.

The reason I need them on a secondary display – rather than simply having them in the background and calling them up when I need to use them – is that this allows me to check them at a glance, rather than taking a couple of seconds to alt-tab over to them. Not a huge time-saver, admittedly, but that time mounts up quickly and it turns out that I check them A LOT.

If I’m not in full flow, I’ll be distracted by notifications from my email or Twitter or Slack every couple of minutes. If I can satisfy my curiosity in seconds and then get back to what I was going, as opposed to switching from my document window to Twitter and back, it saves vital time, and keeps my concentration from being too badly impacted.

There are also other situations in which a second monitor comes in genuinely handy, of course; when conducting video interviews, it’s nice to be able to type up notes while also still being able to see whoever you’re talking to, and the ability to spread all my control panels out when I’m editing something in Premiere Pro is similarly useful. There are a myriad of minor ways in which having a bit of extra screen space allows me to mentally spread out my workload, making it easier to focus on multiple things without getting derailed.

I’ve found that this effect is amplified by using some of Window 10’s more advanced features, too. Most tech people are likely familiar with ‘window snapping’ as a tool for effectively laying out and rearranging your open applications, but the FancyZones tool included as part of Windows Power Toys has been invaluable for optimising my desktop layout. Virtual Desktops is another feature which can greatly enhance multi-monitor productivity by allowing you to isolate different windows, effectively letting you segment your applications according to their task or function.

Having a desk dominated by two massive 27in monitors may seem like a needless extravagance, and truth be told, it is; but if you’re using them right, then they can be a true force multiplier for multitasking and productivity. More than that, they put you in the driver’s seat, letting you bend the operating system and its layout to your will, rather than being beholden to a meager 16:9 plot of pixels.

If push came to shove, I could work with just a single display, but the bigger question is why you would want to constrain yourself to one monitor in the first place. It may be unnecessary, but you can take my second screen when you pry it from my cold, dead hands