Seamlessly combines mesh Wi-Fi and smart speaker functions, but other solutions are faster and more versatile 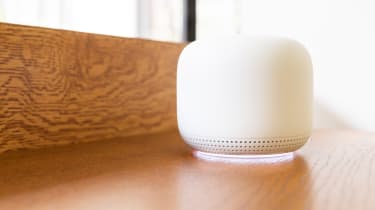 We were big fans of the original Google Wifi mesh system back in 2017, but rivals have since overtaken it on price, performance and features. Now, Google has responded with an updated, rebranded mesh Wi-Fi platform, featuring faster hardware and a built-in voice assistant.

You can buy the Nest Wifi as a router-only package for £149, and then add satellites (which Google calls “points”) for £129 apiece, but it makes most sense to buy the router and point bundle for £239, which promises coverage over 210m2. The two bulbous, largely featureless white units look similar, but not identical: the hub is slightly larger, standing 90mm tall with a diameter of 110mm, while the speaker node is 87mm high, with a circular footprint of 102mm and a speaker grille around the base.

At the rear of each you’ll find the power socket, and the hub has two Gigabit Ethernet sockets: one connects to your modem, while the other lets you connect a single wired client. At the back of the speaker node there’s a privacy switch to disable the microphone but, while the last-generation nodes had two Ethernet ports each, the new one has none.

A small LED at the front of the hub glows white when you’re online, while the speaker unit has encircling downward-facing lighting that shows when the Assistant is listening. Two touch zones on the top light up when tapped, allowing you to nudge the volume up and down – the base light illuminates at varying intensity to indicate the volume level – and four small microphone apertures are set around them for 360-degree listening.

While the Nest Wifi units are impeccably tasteful, the paucity of Ethernet sockets feels like a minimalist step too far. There are still plenty of devices that require or benefit from a wired connection, yet these can only be connected to the hub (or to an older satellite) – and if you want to hook up more than one of them, you’ll need to use an external Ethernet switch. 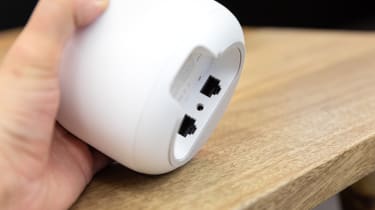 The Google Nest Wifi is a dual-band 802.11ac mesh wireless system. It’s designed to replace your existing router, but can also operate a separate subnet connected to a primary router if need be. Once you’ve plugged the hub in, simply open the Google Home app and hit “add new device”. You’ll then be prompted to scan the QR code on the bottom of the unit to confirm the connection. Finish up by picking a name and password for your new network, and you’re away.

That’s the idea anyway. The Home app stubbornly refused to detect our unit – and there’s no web setup option, just a holding page that tells you to install the app. In the end, uninstalling and reinstalling the Google Home app did the trick and from there on the process was friction-free. The installer even recognised our hub as part of a two-pack, prompted me to plug in the second node once the first had been set up and automatically tested the connection between the two.

Once the system has been registered, a new “Wifi” button appears at the top of the Home app; tap this and you’re transported to the Nest Wifi dashboard page. From here, you can check your internet status at a glance, see how many mesh points and clients are connected, and optionally give access priority to one device.

You can also play with additional features such as parental controls. The options aren’t extensive, but you can group devices together, and enforce schedules and SafeSearch on a per-group basis, as well as suspending access for selected groups with a tap.

At the bottom of the dashboard, you’ll find the option to enable the guest network. It’s off by default, but you can give it a name and password, and – a nice touch – choose which devices will be visible from the guest network. This lets your guests connect to your printer but not your PC, for example. 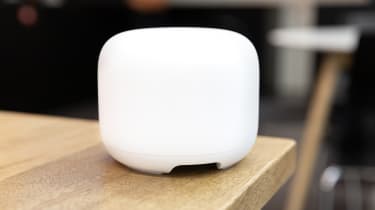 Tap the Settings cog in the top corner and a few more technical options come up, including the option to turn on WPA3 for secure authentication from compatible clients. For the rest, there’s an “Advanced Networking” link that bounces you into the old Google Wifi app (or dumps you at the download page if you don’t already have it). This is where you’ll find serious administration tools, allowing you to change DNS settings, set up your DHCP pool, reserve IP addresses, create port forwarding rules and so forth. You can also nominate other members of your household as co-managers.

What you won’t find is any proper traffic-management settings, nor router-level support for incoming or outgoing VPN connections. There’s no way to split up the 2.4GHz and 5GHz networks either, so you have limited control over which band your devices connect to.

If your workspace is as overfilled with gadgets as ours, you’ll love the idea of combining two of them into one – but, in this case, it can raise tricky questions about location. Personally, we’d hoped to put the smart speaker in a central location, but to get the best Wi-Fi signal we had to move it to a more out-of-the-way area instead, where the Google Assistant is much less useful.

Still, once we started talking to the Assistant, we were impressed by how well it picked up our voice, even over background noise – and the output quality is good too. Although the Nest Wifi’s 40mm speaker driver is the same size as the one in the Google Home Mini, it has much more warmth and depth. That’s especially evident when you push the volume up: the Home Mini becomes harsh and distorted, while the Nest Wifi remains better balanced. It’s not as rich-sounding as a full-sized speaker, but as long as you don’t demand an audiophile-quality experience, it will satisfactorily fill a medium-sized room.

The original Google Wifi units had an AC1200 speed rating, representing a maximum throughput of 400Mbits/sec on the 2.4GHz band, plus 867Mbits/sec at 5GHz. The new Nest Wifi boasts a much higher AC2200 rating: Google hasn’t confirmed how that divides up, but we suspect the 5GHz radio has been doubled to 1,733Mbits/sec. MIMO capability on that band has also been beefed up, from 2x2 to 4x4. 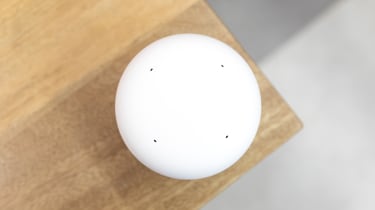 To test the benefit of this, we set up the main hub in our central space, and placed the remote node in the smaller area at the opposite end of our premises. Some other mesh systems we’ve tested have warned that this is too large a distance for optimal performance, but the Google Home app assured us the connection between the two units was “great” so we pressed on.

We then took our Microsoft Surface Laptop, with its 2x2 Marvell Avastar 802.11ac wireless adapter, to various parts of our premises and measured upstream and downstream file-copy speeds to a NAS appliance, connected to the hub via Ethernet. On average, the Google Nest Wifi was 41% faster than its predecessor for uploading, with a peak speed of 25.4MB/sec. Downloading was 31% faster, peaking at 152MB/sec.

Clearly, the new Nest Wifi is a big upgrade on the old Google Wifi system, yet we can’t call it a winner. Upload speeds were strong, but, like its forebear, it only delivered fast downloads at short range. Elsewhere in the building it couldn’t get close to the speeds delivered by the £320 Netgear Orbi Voice.

That’s probably because the Orbi Voice has a third radio dedicated to ferrying backhaul traffic between the remote node and the hub, whereas with Google Wifi both backhaul and client communications must share a single channel. That eats into the available bandwidth, and the effect will only become more pronounced as you connect more devices.

There are other flaws that we need to talk about, too. First, the connection remained on the 5GHz band throughout our tests, but when we tried moving the remote node to a different location, connections from the rear of the building switched to the 2.4GHz band, slashing speeds by around half. As we’ve mentioned, the Nest Wifi doesn’t support band-splitting, so to get a fast 5GHz connection we had to tweak our laptop’s driver settings to disable the internal 2.4GHz radio. 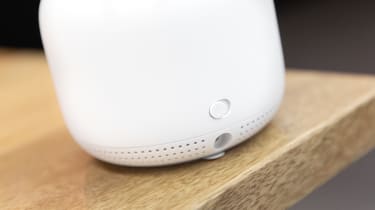 The real elephant in the room, however, is Wi-Fi 6 (also known as 802.11ax). We’re seeing more and more devices that work with the latest wireless standard, but the Google Nest Wifi only supports 802.11ac. This may be sufficient for you: Netflix claims a connection of about 4MB/sec is fine for streaming 4K content, and the Nest Wifi easily delivered more than double that to every part of our premises.

In a year or two, however, 802.11ax will be commonplace, offering double and triple the speeds of a typical 802.11ac connection, plus better penetration – leaving the Nest Wifi looking obsolete.

The Nest Wifi is designed with a focus on simplicity and, on those terms, it’s a big success. The units look as uncomplicated as you could ask for, they neatly combine two roles into one and they require little setup and maintenance. That’s undeniably appealing, and the smart speaker doesn’t sound at all bad, either.

However, while the Nest Wifi is faster than the old Google Wifi system, the dual-band design holds it back from peak performance. And as new 802.11ax-enabled devices arrive, the Nest Wifi won’t give you the benefits of the faster, smarter networking standard. The dearth of Ethernet connectivity is a frustration too and, while it may seem like a clever idea to combine a Wi-Fi access point with a smart speaker, you might well have to balance performance against convenience.

All of this makes it hard to give the Nest Wifi a general recommendation. Non-technical customers with straightforward Wi-Fi and voice assistant needs might find it perfect, but £239 is a lot to pay for a system with limited features, and which is neither especially fast nor future-proof.