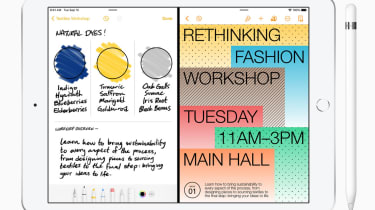 Apple unveiled its eighth-generation iPad outfitted with a powerful A12 Bionic chip that brings the Neural Engine to Apple’s entry-level iPad for the first time.

The eighth-generation iPad with A12 Bionic chip makes nary a compromise when it comes to impressive performance. Not only does it provide 40% faster performance than the previous chip, but it also boasts twice the graphics capability of the previous iPad.

Joswiak added: “With its beautiful 10.2-inch Retina display, the performance boost from the A12 Bionic, great cameras, and so much more, the new iPad is an incredible value at a time when, more than ever, our customers need powerful and versatile ways to work, play, learn, and connect with loved ones.”

Apple also announced that iPadOS 14 will be available for all iPad models, including the eighth-generation iPad, on September 16. The updated operating system brings new features to the iPad, including Universal Search, sidebars for apps like Photos and Files and a more compact design for incoming FaceTime and phone calls and Siri interactions.

The eighth-generation iPad can be ordered today, and deliveries will start on September 18. Pricing starts from $329 for the Wi-Fi model and $459 for the Wi-Fi and cellular model. You can choose from three color options, silver, space gray or gold, and two internal memory configurations, 32GB or 128GB.