Philip Adams talks licenses, cloud and about the new face in the SAP UK MD seat... 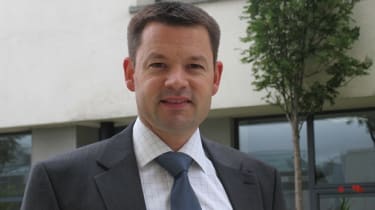 SAP UK and Ireland User Group has notched some big successes in the last 12 months under chairman Philip Adams.

The user group - along with its European counterparts - has persuaded SAP to make Fiori and Screen Personas available for free under software licenses, warned the German tech giant not to abandon on-premise in its quest for cloud supremacy and pushed it on the issue of parking licenses.

The availability of Fiori, a collection of user friendly applications that provide a common interface for various business functions, goes a long way to helping address complaints about the complexity of SAP products' UI.

And while the issue of being able to park licenses - where users could stop payments for a time when they do not use the software - drags on, the user group has a new person to speak to in the shape of SAP's latest UK & Ireland MD, Cormac Watters.

IT Pro spoke with Philip Adams on the above subjects and more at this year's SAP UK & Ireland User Group Conference in Birmingham.

You sat down with Watters on his second day as UK managing director. What do you think of him?

Obviously he has first hand experience of being a customer [as COO of DCC Technology, where Watters was responsible for implementing SAP software].

How do you think he should balance getting new customers and supporting current customers?

He fully realises sales are important, but get the sales and at the same time customer satisfaction: customer connection and working with customers is equally important. He has a tough job on his hands to balance both, but I really do hope he's given the space and the time to do it over the next number of years. It would be great to see him around.

Has the role of UK MD been an unstable one in the last few years? Watters is the fourth appointment since 2009.

It was Tim Noble and then Steve Winters stepped in for six months [in 2011] and then Tim came back [in 2012] and you could sort of say there were three MDs in four or five years. Tim, then Steve, then Tim and now Cormac.

There's been quite a few if you go back 10 years. There's been five or six. The development's driven from Germany. At the end of the day the regional businesses are sales organisations so it's probably down to [sales] numbers.

In your keynote you stressed the importance for users of getting more out of their license agreements. Does SAP have a problem letting customers know about its products?

That's what I wanted to get out of the keynote, you do need to tell about your customers and incentivise your account managers.

One example is the cloud extension policy, which lets on-premise users swap license agreements for subscriptions when they migrate to the cloud. More than a year after it was created, you found adoption is still low at 10 per cent.

Well, 23 per cent have said the cloud and on-premise extension policies are attractive. They're ready to adopt and move to the cloud. They can't go again and ask for more money form their CFO if they've spent some already, and if you want to move to, say, SuccessFactors, they can recognise the investment they've already made.

Ironically, [new MD Watters' old employer] DCC weren't members of the user group and that first meeting we had with him he was alluding to things SAP has been doing that we know we've communicated to our members.

If he had have been a member he'd have known about those things. Like the cloud extension policy, he didn't know about it. And that's been about out for nearly 12 months or more.

Last year you felt SAP was ignoring on-premise in its push to the cloud - do you feel that's something that has improved?

It's less of a concern this year. I feel they've decided or realised that you can't force everyone into the cloud. Some people still won't do it because of security concerns or other reasons and SAP have realised it might be a hybrid approach.

Although they're a cloud company and want to encourage us to all move to the cloud, they will continue to develop on-premise software because there's no point in turning business away, they're not that stupid.

Every solution they develop from now on will be a cloud solution, whether they continue to work on-premise, time will tell.

Another success has been the free release of Fiori. But you found that 41 per cent of users aren't aware of the pre-requisites for installing Fiori. Could you talk about those potential barriers?

Even though you don't pay a license fee anymore, Fiori will still cost you money to put it in place. You have to implement it, so you have to go and get a partner, or it can cost you time if your own team's doing it. Naturally there has to be a level of concern around the take up. There's barriers but it's of interest.

You have to have HANA to have the full value of Fiori. These Fiori are mobile apps essentially, and there's an analytical element to it and if you're not running on [in-memory database] HANA you won't get the value. Not a lot of customers know that.

SAP releases are all now based on HANA. Is the company slowly forcing people onto the platform?

Covertly. It will just be a natural progression that customers will realise they don't need to move tomorrow, but why wouldn't you if you can get more value out of it? If there's a business justification to do it, then why wouldn't you do it?

But we often say if you're not a huge organisation with a massive footprint of SAP and speed and big data aren't a concern then why move to HANA?

I think they've realised that and that's why every product they release now is based on a HANA platform. You don't have to be there straight away, but it's not going to be a question of if you move to HANA, it's going to be when.

Lastly, the issue of parking licenses is still rumbling on. Have you hit a brick wall there?

We're not going to give up on licenses, we still see it as a big topic globally. But it is a global issue, there's very little we can do locally on this. We want that flexibility. We're not expecting software for free, but parking is a valid thing to do when organisations change in size, these economic growth cycles and business cycles do happen and it would be sad to think your business is put in threat because you can't afford the maintenance fee.

But there are tips and tricks around it that we as a user group do when agreeing a commercial contract with SAP around 'don't bundle them all together, keep them separate' and so forth so you can at least not pay one contract. We'll keep the pressure on those aspects but you need to pick the battles you can win and keep a bit of pressure on the rest.