The outgoing CEO made the comments at her final HPE Discover 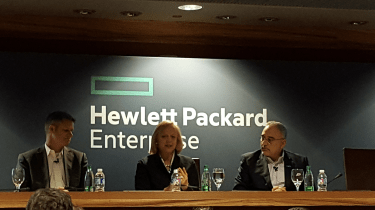 HPE's outgoing CEO Meg Whitman said that a new way needs to be found in order to keep women interested in STEM subjects.

"The job growth globally is going to come disproportionately from science, technology, engineering and maths in the next several decades, just as it has in the last three decades," she said. "We've got to figure out a way to keep women interested in that and also underrepresented minorities."

Whitman highlighted that in the US, the challenge for women in science, technology, engineering and maths begins in kindergarten through to twelfth grade.

Whitman underlined that women need to be able to take advantage of future employment opportunities as every company, in every sector, is now a technology company.

Pointing to her own company, she acknowledged that HPE has not done enough for diversity.

"I think every technology company at Silicon Valley has recommitted to improving diversity. How does one do that? Yes, you can hire in people at the senior levels but that is a very slow way to move the needle on diversity," said Whitman. "We all have got to do a better job of hiring a diverse group of individuals in early careers out of college and graduate school. You've got to hire a people that is representative of the population in each of the areas in which you work."

Despite this, she is proud of the progress HPE has made in the last five years. She pointed out that on her leadership team, there are three women - although that will be going down to two following her departure.

She also reiterated her support for the Argentinian Neri, who is set to move into the role of HPE CEO once Whitmas leaves, and said he was exactly the kind of leader she had in mind.

"His passion for the technology, customers, partners, employees; it was palpable today. We've done a lot of events together and it's been a real joy," she said.

She did have some advice for him: "Be bold and take risks. When markets are changing this fast, the strategy of the status quo is a bad strategy that you will almost certainly lose."

Antonio, who will become CEO on 1 February, called it an "incredible honour".

"I grew up in this company for the last 23 years but I'm really really excited about the vision and strategy we have in place.

"I want to thank Meg for all the support, the coaching and friendship over the last few years and obviously she will stay close - let's not forget she will continue to stay on the HPE board. That's going to be a tremendous help for me because she will obviously be a guidance to stay focused on what we have to do," he said.