View from the Airport: HPE Discover 2017 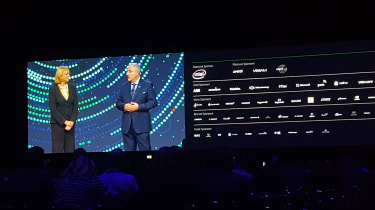 HPE held its bi-annual conference in the Spanish capital this month where attendees flocked to the Feria de Madrid to hear all about the company's latest news. This was CEO Meg Whitman's last Discover and it was certainly a good one to leave on.

The company came out strong with a flurry of announcements, almost enough to mask the fact that Whitman is leaving. Her successor, the Argentine Antonio Neri, presented himself as confident and strong enough to step out of her shadow.

Hybrid IT, the edge and AI were strong themes throughout Discover, especially when they were linked to the importance of digital transformation. A new partnership with robotics firm ABB underlined this, as HPE will be providing its hybrid IT products for the firm's industrial plants. The company also released OneSphere, a new multi-cloud management platform to give businesses an overview of their public, on-premise and private cloud infrastructures.

Additionally, the Cloud 28+ group also announced its membership had grown from 200 to 700 in a year. The conglomerate has a worldwide presence and has members from Europe, the Middle East and Africa, North America, Latin America and the Caribbean and in the Asia-Pacific too.

HPE introduced Greenlake, pay-per-use workload pricing, for its Big Data, backup, open database, SAP HANA and edge computing products. The company claimed that through Greenlake, businesses will be in control of their infrastructures while using cloud-based environments.

There were interesting case studies, too, such as the centre for brain diseases in Germany using HPE high performance computers to help with its research. Researchers are now able to process large data sets in a mere 13 seconds, opening up new doors to what they could investigate as well as giving many a new, agile, way to work.

Furthermore, IT Pro talked to Bill Mannel, HPE's VP of HPC and AI, and learnt more about the servers the company launched into space. Mannel told us about other interesting examples, too, such as how HPE is helping researchers investigate climate change.

HPE partnered with Stephen Hawking's Centre for Theoretical Cosmology to support its research into the structure of the universe as well as black holes by analysing huge data sets.

Despite all the good news, Whitman said that HPE has not done enough to address diversity within the organisation and warned that more needs to be done to get women into STEM subjects.

She gave some advice to Neri in his new role: "Be bold and take risks. When markets are changing this fast, the strategy of the status quo is a bad strategy that you will almost certainly lose."

Neri reminded us that Whitman will continue to sit on HPE's board and provide him with guidance; she may not be CEO but she is not going to abandon the company she has been in charge of for six years.

On the back of this Discover, Neri is going to need to carve out a name for himself and prove to Whitman, shareholders and customers he definitely has what it takes to be President and CEO. His 23 years of experience at the company position him as the best candidate to succeed her and add to Whitman's defining legacy. It will be very interesting to see what he has in store for us during the next Discover.