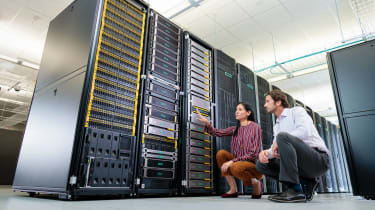 HPE has launched a host of new additions to its composable cloud portfolio, chief among these being a hybrid cloud software stack that aims to bring the flexibility and fluidity of the public cloud, as well as a host of AI-driven storage systems, to the on-premise environment.

The company claims this represents the industry's first hybrid cloud platform built on composability and flexible deployments, something that will help those businesses struggling to move to the cloud due to a lack of skilled stack specialists.

HPE follows the likes of Microsoft, Google, and IBM, leading technology companies that have shifted their focus over the past year towards a customer base that's increasingly adopting multiple cloud providers or hybrid over a single, all-encompassing service.

It also builds on HPE's launch of a hybrid cloud-as-a-service model, which sits inside its GreenLake financial services brand, allowing customers to pay monthly in exchange for hybrid services deployed and managed entirely by HPE.

This new Composable Hybrid Cloud product extends that by allowing customers to essentially upgrade their traditional data centre set up to operate in the same way as a public cloud. This means that typical public cloud features such as the fluid provisioning of resources can now be built into a server stack, which the company claims will drastically improve the efficiency of workloads and allow for better communication between deployments.

"Our customers want to innovate faster, with greater automation and intelligence," said Phil Davis, president of Hybrid IT at HPE. With our new open hybrid cloud platform, enterprises of all sizes can now manage, provision and deliver workloads and apps instantly and continuously to accelerate innovation."

"HPE is having to continue to transform and develop new capabilities to remain relevant in a very dynamic, changing world," said Davis. "When we started to realise the world would be hybrid, we realised we needed to take a new approach for our customers. We set out a very bold vision of the future, we created an entirely new category that we called Composable. We want to give developers and data scientists the experience they want, the freedom to access the clouds and tools that they prefer to use, not locked into one stack, and the ability to use that whether it's public or private."

This is all handled by HPE's OneSphere management software, which allows users to quickly provision workloads in both the public cloud and on on-premise servers using the most efficient and most cost-effective setups to address specific business needs.

The new software stack includes HPE's Composable Fabric, first introduced as part of its Synergy platform, which is placed on top of a server setup built with ProLiant or Synergy servers. This works like a mesh that's able to automatically scale up and scale down network resources based on the needs of workloads, as well as allow those processes to communicate with others on the network.

"We needed a revolutionary approach to networking that eliminated the cost and complexity of both traditional and spine and leaf networking," explained Davis. "A way to automatically and dynamically scale just like the public cloud, whether that's in a rack or across racks, and without the need for deep or specialised networking technology."

This simplifies the operations of the network by allowing it to effectively act like a hyperscale cloud provider, providing a means to adjust workload balancing on the fly, the company says. Once deployed, this is said to reduce the over-provisioning of resources by up to 70%.

InfoSight, HPE's AI-powered analytics service, is also integrated into the software stack, which automatically predicts and prevents points of failure in the workload, reducing the amount of manual work required by operators.

"Organisations are demonstrating an ever-growing appetite for automation, scalability and openness to aggressively accelerate development and operations," said Thomas Meyer, group VP of IDC. "With composable cloud, HPE aims to deliver a foundational pillar with those attributes in mind to help customers accelerate their digital transformation."

HPE's Composable Hybrid Cloud platform on ProLiant rack servers will roll out to customers in the US, UK, Ireland, France, Germany and Australia starting in early 2019.